Does putting a tampon filled with yogurt in the freezer cure a yeast infection? It 100% does. I know because I've done it and scientific studies have repeatedly confirmed it. Hiding a porcupine in your underpants is unsustainable for the long term, so give yogurt in your vagina a shot.

This cure is all contingent on you remembering to remove the tampon from the freezer and shoot it up your whoop tee woo, you understand. I know whoop tee woo is not a scientific term, but vagina seemed a bit bold for the first sentence.

O.K. .... I assume after that introduction it's just us girls here now, so I can be frank. One of the first posts I wrote for this website featured me testing whether yogurt for a yeast infection (bacterial vaginosis) really works.

Drinking water for a bladder infection worked, and those little home kits for pulling out the root of a plantar wart worked - so why not yogurt for your vagina?

The frozen yogurt worked. A 50 cent treatment made with something you probably have in your fridge right now. If you don't have more than a teaspoon of yogurt, I can show you how to turn 1 teaspoon of yogurt into 4 cups of it by making your own.

So a frozen yogurt tampon worked to get rid of a yeast infection. But how??

For a couple of reasons.

A cold compress stops the itch from a yeast infection immediately. Topical cooling stops the itch because the extreme cold contracts your veins and cuts down blood circulation and you become numb.

A study published in 2018 by Boyi Liu and Sven-Eric Jordt very officially states:

In plain language, when cold touches the active, itchy agitated nerves it slows them down and calms their hysteria. It's vaginal valium.

Yogurt, as we all know, is full of beneficial probiotics. Those probiotics include the bacteria lactobacillus which are what knock out the yeast infection. The lactobacillus in yogurt produces hydrogen peroxide which inhibits the candida growth. Yogurt bacteria stops the yeast from multiplying out of control.

This study on yeast infection treatments compared using yogurt and honey to using a commonly prescribed antifungal, Clotrimazole . Their conclusion was that yogurt and honey not only worked as well as the antifungal cream - it worked better.

In addition to the causes of general yeast infections, vagina's have causes all their own.

All of these things can contribute to your increased risk of a yeast infection.

IF by the way you do get urinary tract infections, I have a natural cure that works for that as well.

Are you convinced that yogurt for a yeast infection is a good idea?

Good. Because it is. Here's how to get that yogurt where it needs to be.

I bet you were hoping there'd be a video of me trying this. There is. At first I didn't think the technique worked but make sure you WATCH UNTIL THE END.

Since making this video I've come up with a tidier way to create a frozen yogurt tampon.

Getting Yogurt in the Vagina

How to put yogurt in there and keep it there is pretty easy. The solution I tried so many years ago was to fill a plastic tampon applicator with yogurt (no sugar added plain yogurt and check to make sure it does indeed contain lactobacillus.)

I'm going to tell you something now. Pay close attention. A frozen yogurt tampon is COLD. Like, very cold. Eyes watering cold. But it works.

What if it's too cold?


If you just can't tolerate having a frozen yogurt pill thawing in your vaginal canal, you can skip the tampon freezing and applicator and just use the syringe to apply yogurt inside of you. It will still be cold, but less so.

What kind of yogurt?


Make sure you're using plain, sugarless yogurt that contains Lactobacillus acidophilus. Almost any plain unsweetened yogurt will have that. Just look to make sure it has live cultures.

Can a home remedy really work?


Yes. We've been through this. To reiterate - plain yogurt is both scientifically and anecdotally proven to treat yeast infections quickly and in a cost efficient way.

And NOW if you're interested, here's the story of my own yeast infection.

Once upon a time I got that itchy feeling down there.

I was pretty sure it wasn't a mosquito bite and almost positive I threw my poison ivy underwear out, so it couldn't be that.  It was looking more and more like a yeast infection.  I hadn't had one in several years, but it's kind of like riding a bike.  You don't forget it and it can give you a funny feeling down in your nether regions.

It wasn't what you could describe as "raging".  I certainly didn't have to sequester myself inside the house so I could scratch between my legs with a bottle brush, but it was definitely something that would need taking care of.

So ... as I am want to do, I headed to the untrusty Internet to see if there was some sort of home cure.

There were a bunch of suspect cures on there, suggested by obvious whack jobs, but there were also a few actual possibilities.

One of which was the frozen yogourt tampon.  Hmm .. sounds kind of plausible.  The more I thought about it, there was no way that perfectly reasonable solution was suggested by a whack job. I was gonna try it!

So I froze some yogurt in a tampon, shoved it up and waited. It didn't work right away. In fact I didn't think it had worked at all. But 24 hours later I had relief.

The natural bacterial cultures, plunged deeply into my inner womanness got to work like little vagina chimney sweepers, getting rid of the bad bacteria and building up the good.

If you have a yeast infection, put that porcupine back in the forest and open the fridge. I bet you're itching to try it. 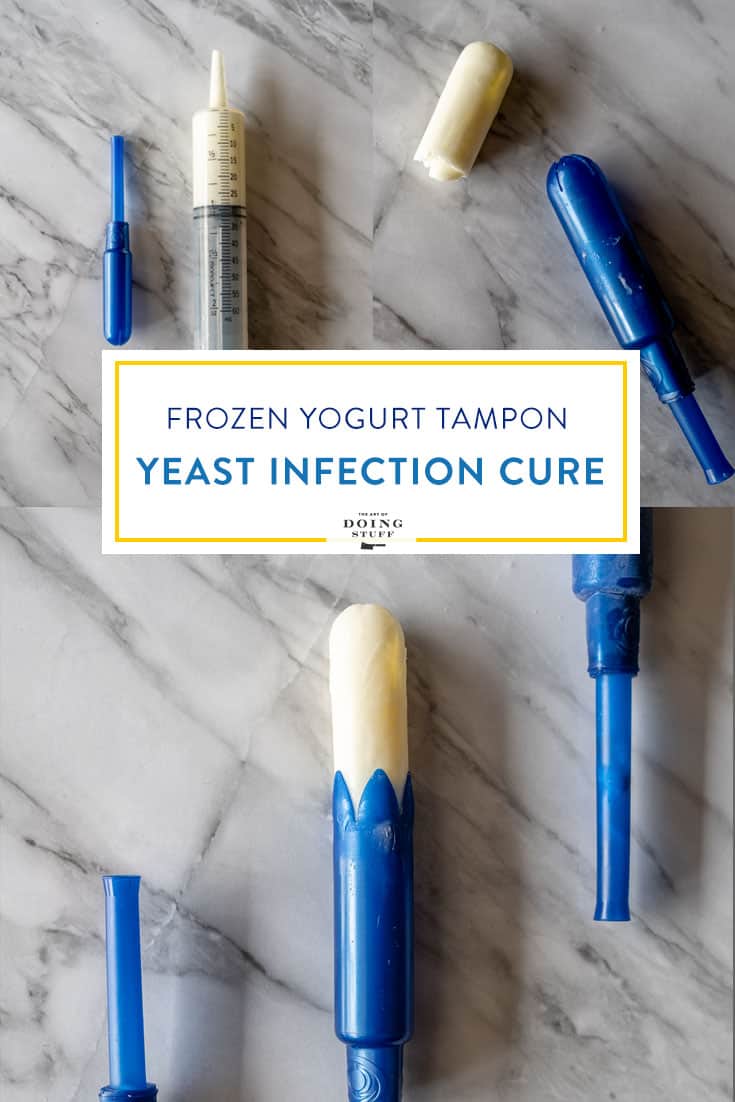