Home » Tips » Decorating » An Update on the Antique Hardware Cabinet.

An Update on the Antique Hardware Cabinet. 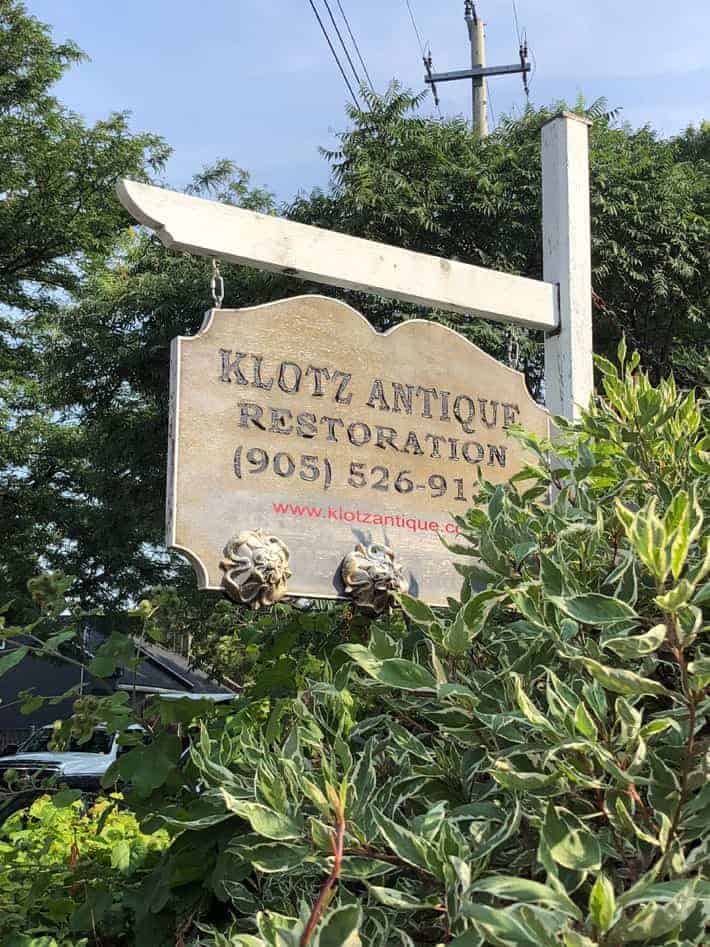 There aren’t a lot of things I hand off to other people to do for me.  It’s usually faster, easier and cheaper for me to do it myself.  Except laser eye surgery.  I let someone else do that.  It’s been 20 years and I’m still kind of disgruntled about it.

When I first saw (with my laser vision) this cabinet at an antique store I loved it but ignored it because it was about 12″ too long for the space I had in my kitchen. 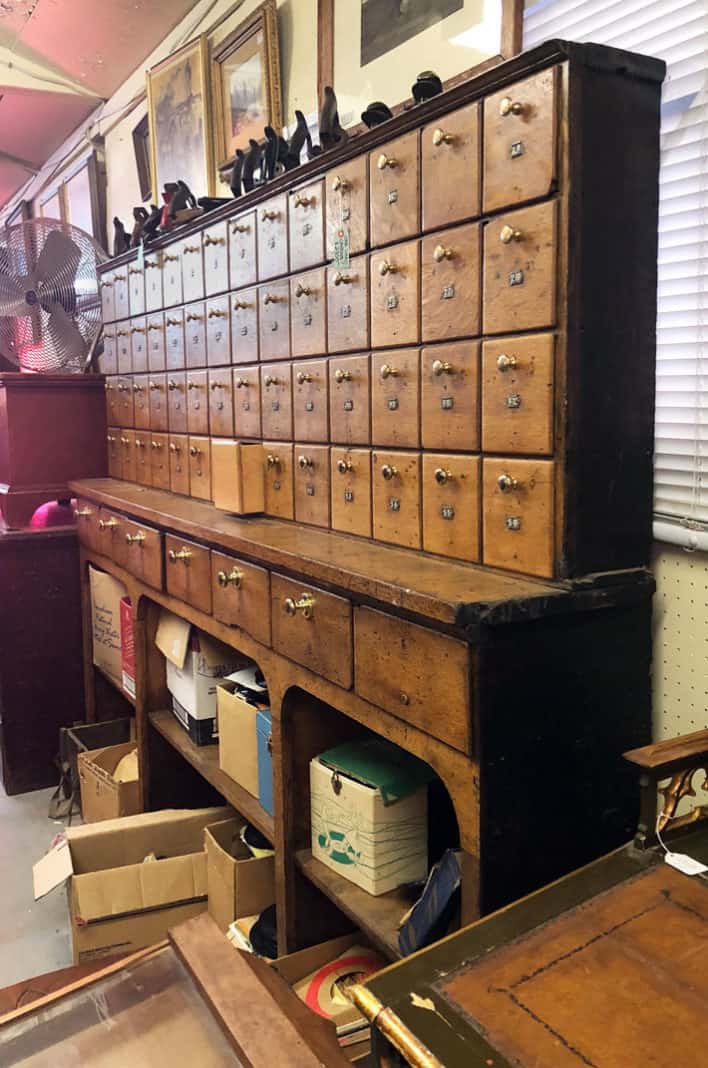 You know you really like something when you can’t stop thinking about it.  For a year.  So when I saw the cabinet again this summer I realized I was probably never going to forget about it and I’d better just buy it. If only to free up some space in my brain for thinking about other things, like what to make for dinner.

I took a good look at at the cabinet and realized if I cut a small middle section out if it, the cabinet would be the exact right length.

I thought of doing it myself but I’d have to buy a router and a few other tools to do the job right, plus where … I mean seriously … WHERE did I think I was going to get the time to do this? Before or after having a time saving feeding tube inserted?

After spending a week thinking about it, I waved a dingy white tea towel in surrender and called “my guy”.

My guy is an antique furniture restorer who can turn anything into anything. 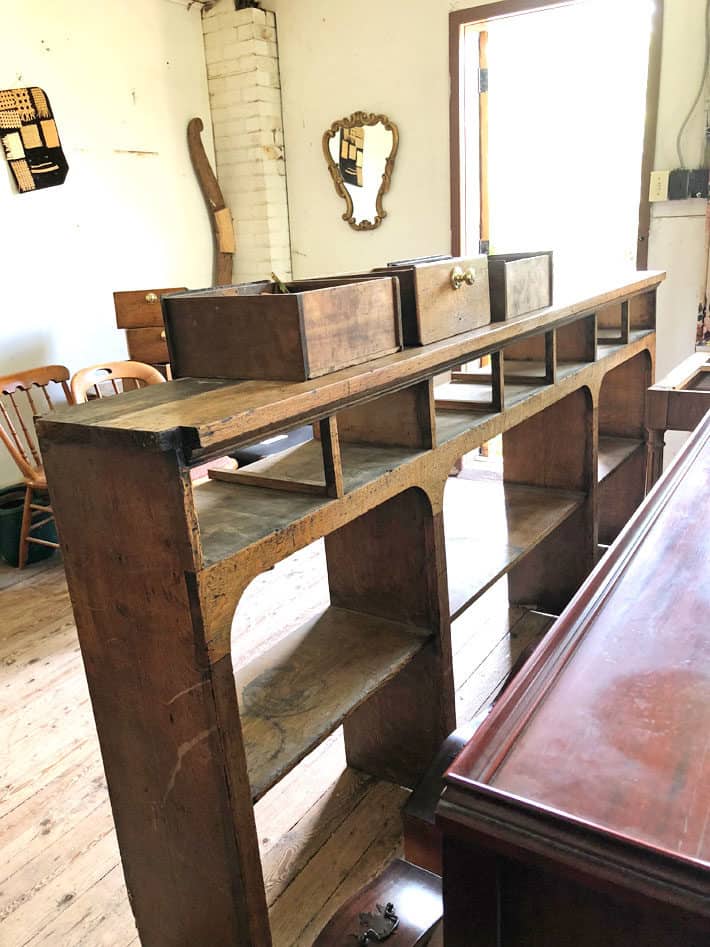 Half of the battle when hiring someone to do a job you can’t or don’t want to do is finding the right person.  That person should generally not be drunk when you meet them.  It was after finding the wrong person to fix my fence over a decade ago that I plunged deep into the world of DIY.

After interviewing a stampede of fence fixing guys I settled on one of the two guys who showed up.  I picked the one who was sober. At 10 a.m.  And he still made a complete mess of my fence.

I used this antique restorer years ago when I had 2 antique single beds that I wanted to be turned into a Queen sized bed. It turned out seamless.  No one would EVER know my bed used to be 2 beds.

So I had my antique hardware cabinet delivered straight to my guy and I was there ready and waiting when it arrived. I hadn’t seen the cabinet for a few weeks so I was eager to get reacquainted with my love. 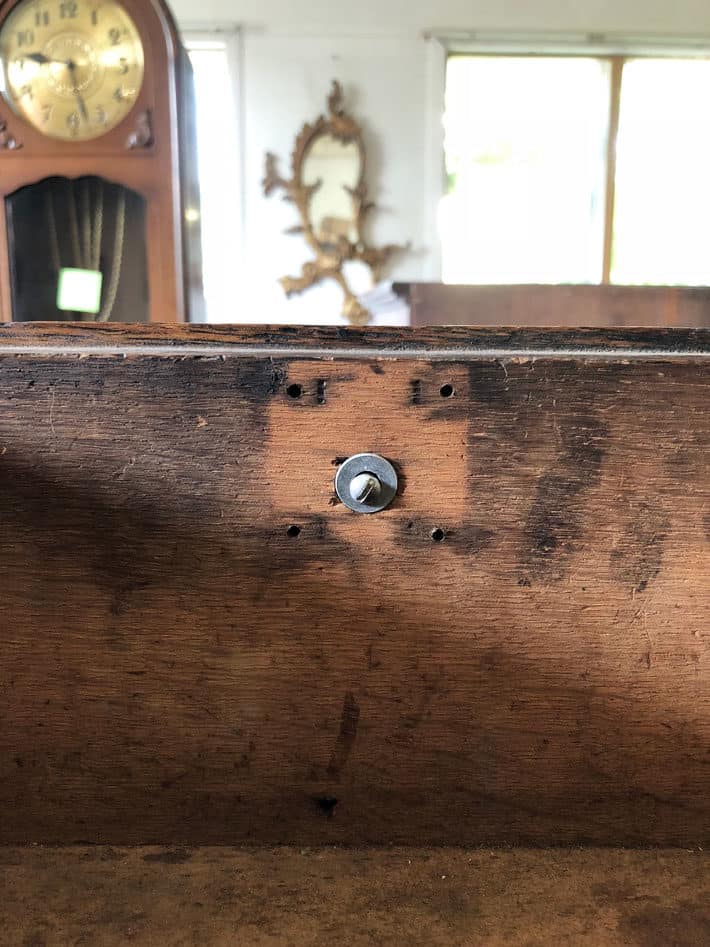 That’s when I started taking a good look at things.  I took one of the drawers out and looked inside to discover a square of discolouration and 4 screw holes.  Hmm.  Interesting.

I asked both the antique dealer who delivered it and the guy restoring it and they both said LOCKS!  Apparently each and every one of these drawers used to have locks on them.

Sure enough, after looking at some of the other longer drawers in the piece, there was a lock. A single drawer was left with a lock. 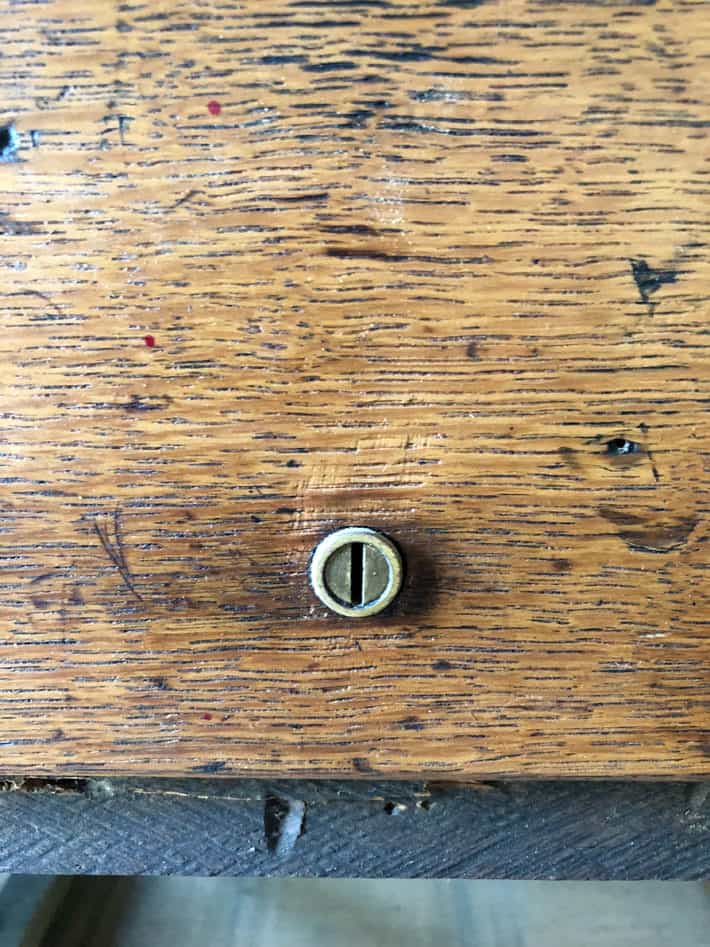 The rest of the 60 or so drawers had the locks removed and cheap knobs installed over the holes. I knew the knobs were awful, but I didn’t know there was such a big hole underneath them. 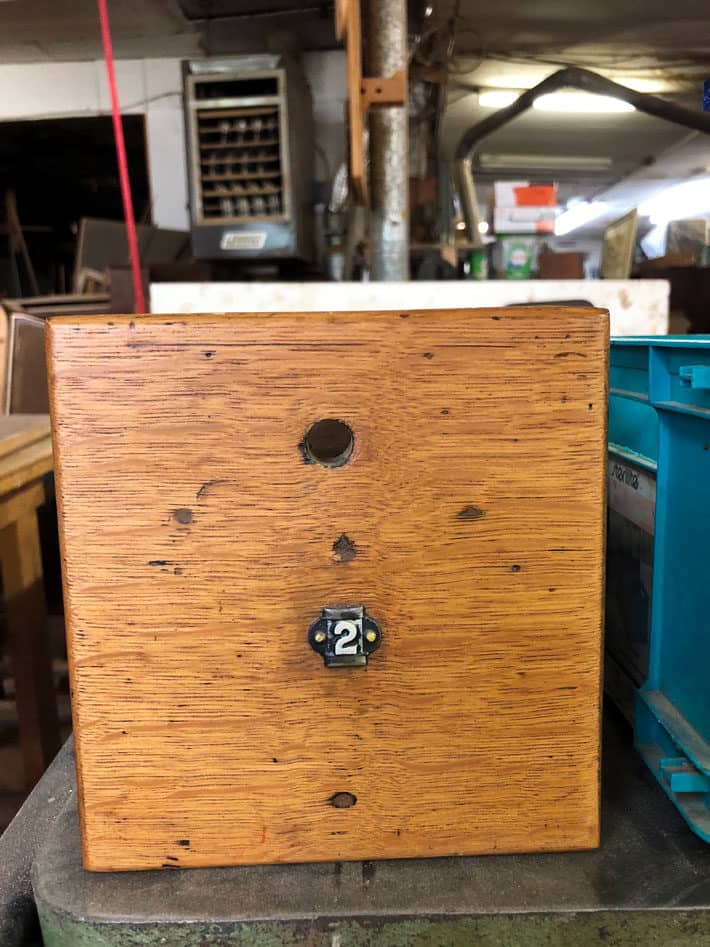 This was going to slightly limit my knob choices when it comes time to replace them.

Then I started thinking – it might be nice to have it restored to its original condition with cylinder locks.

Which got me to thinking even more.  Why would a hardware store lock EVERY single drawer they had? It didn’t make sense.  Screws, nuts, nails … are those the sort of things you would lock up?  I didn’t think so, but this cabinet is probably from around 1900 so maybe  nails were a lot more valuable then.  Who knows, maybe they were special nails made from the bones of gunslingers or something. 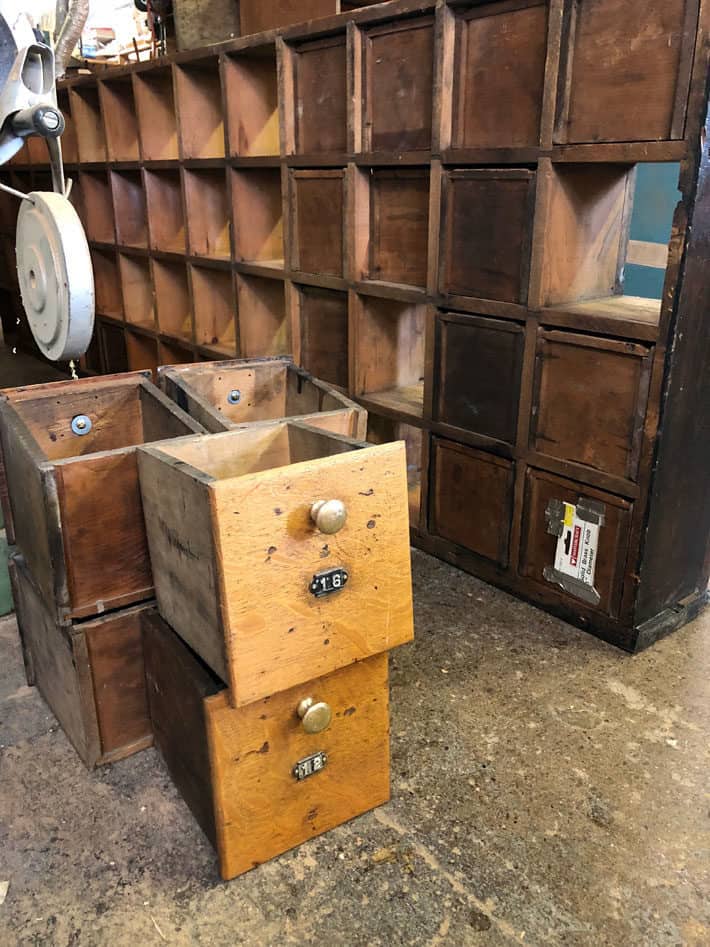 The other possibility is something my uncle mentioned.

He said he remembers seeing a cabinet similar to this as a young boy in a pharmacy and it was an apothecary cabinet.  Now.  If all these drawers were filled with medicine from the 1900s like cocaine, heroin, morphine … you know, the regular old painkillers of the day, then it would make sense to have locks on all the drawers. 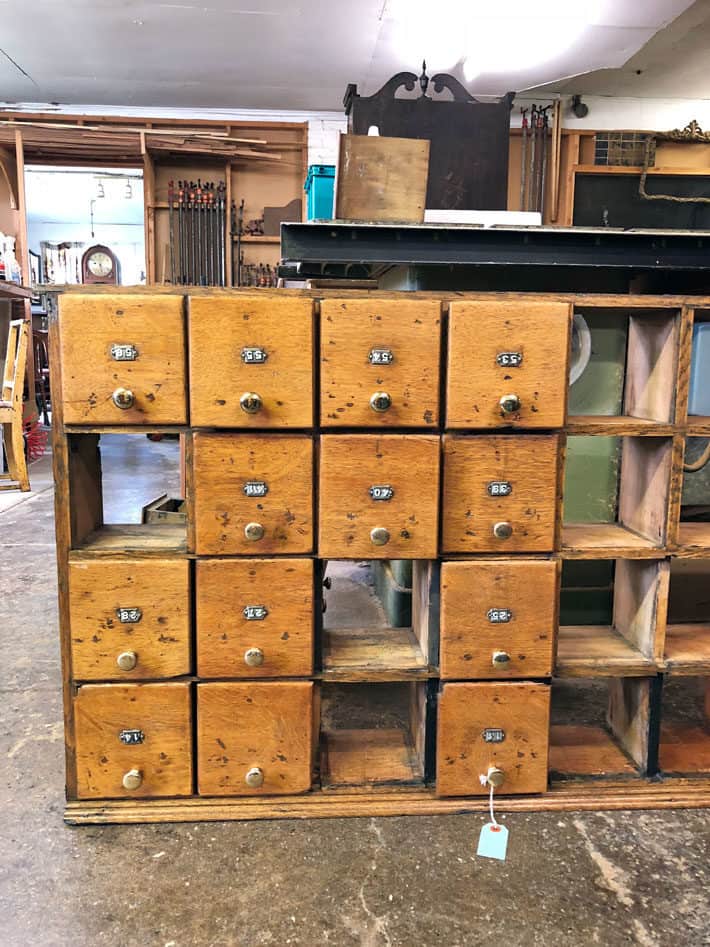 I really do like the idea of restoring the cabinet to how it originally would have looked.  Of course putting locks on all the drawers means they’re going to be a bit of a pain to get into.  Not necessarily a bad thing if you store potato chips, crack pipes or chocolate covered almonds in them.

You see, with cylinder locks you don’t have knobs, you just  have the lock.  You stick the key in, turn the lock and use the key as a knob to pull the drawer out.  Kind of a pain when you just want to grab a roll of masking tape or bottle of oregano.

But. Almost impossible to replicate.  Places like D. Lawless and House of Antique Hardware have really good replica knobs, pulls and other stuff but no one seems to have outstanding antique cylinder locks with a gentle burnished look and authentic matching keys.  Go figure. 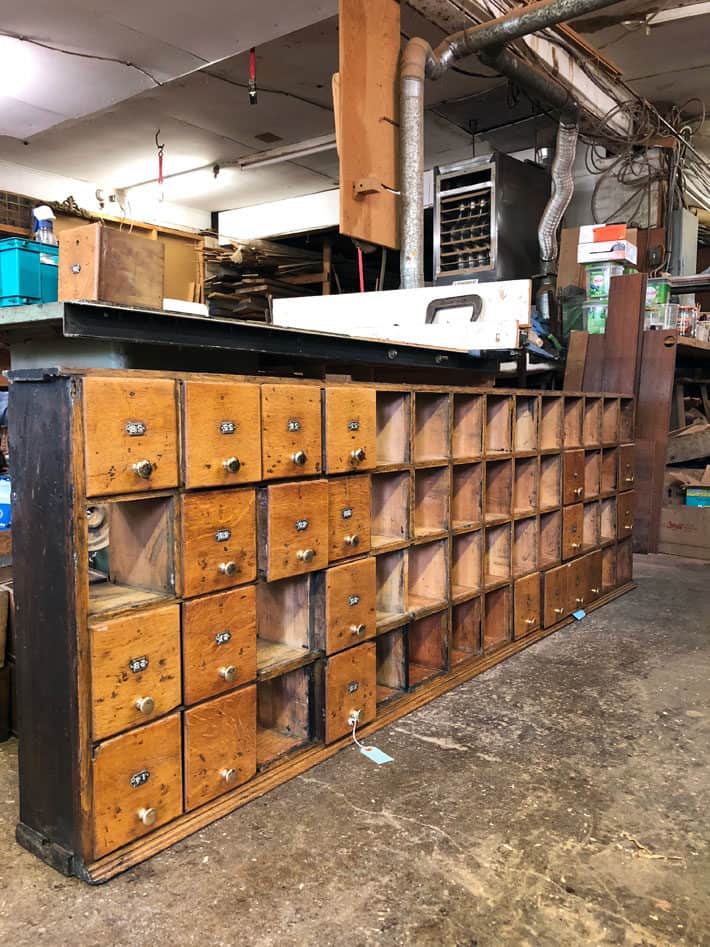 My cabinet is in line to be worked on but won’t be started until around the middle of September. I’ll tack a couple of weeks on just in case, which means I’ll possibly get my cabinet home by the beginning of October.

I have between now and then to decide on my knob/lock situation.  I realize knobs are the more practical choice, but so is shaving your head as opposed to dealing with washing and drying it.

Or wearing glasses instead of getting laser eye surgery.

Or eliminating chewing by inserting a feeding tube.