Popping popcorn in the microwave is fast, easy and puts on a show like Jiffy Pop!  Here's the easiest and most entertaining way to pop your satisfying snack. 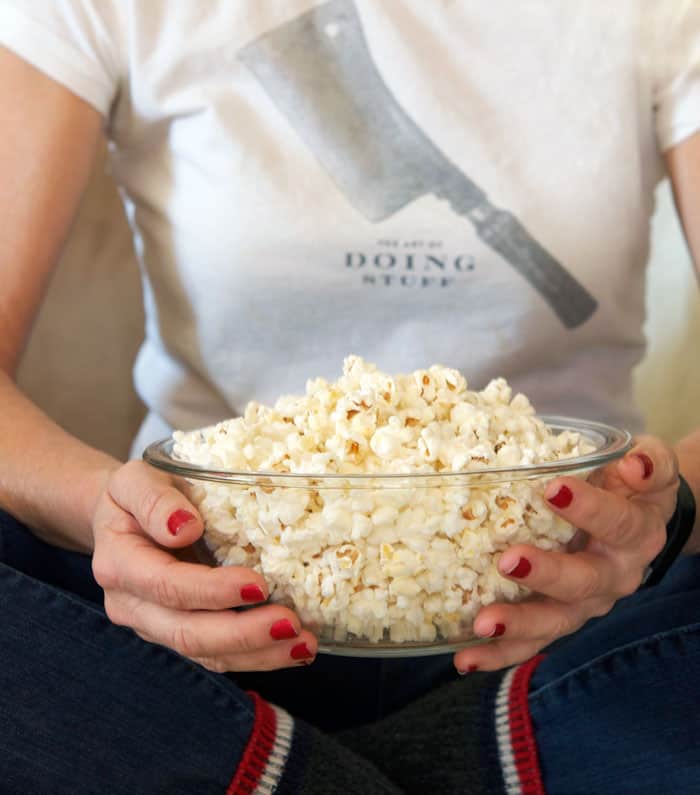 Skip right to the method.

I store my knitting needles in a Pringles can.  That pretty much sums up my love of the potato chip. I love them with all of my heart.

I just put a reasonable amount into a small bowl, close up the bag and put it away in the cupboard.  I do this over and over again until all the chips are gone which usually takes about half an hour.

So I've had to move on to another snack that I can eat while I'm pretending to watch a movie at night.  I say pretending because what I'm usually doing is half listening to a movie while I work on my computer or creep people's Facebook pages.  When someone makes a movie that's more interesting than some of the weirdos I know on Facebook, then I'll watch it.

I mean let's face it. There's no comparison between the crispy goodness of a potato chip and a styrofoamy mouthful of popcorn.  Luckily I've found if you put even just a tablespoon of butter on popcorn it improves it immensely.  And salt of course.  Because salt is the spice of Gods.

I was buying bags of microwave popcorn and using those but I didn't really like the fake butter popcorn.  I also bought prepopped bags of popcorn which were O.K., but still not great.  Plus the bags of popcorn were expensive.

So on a whim I bought a bottle of Orville Redenbacher's popcorn and brought it home with me.  Since we all like to live in a world where we do things the cutest, most Pinterest-worthy way possible I immediately pulled out a pot and some oil and tried to stove top pop my popcorn.

All I ended up with was a pot I had to scrub burnt oil from and 3 popped kernels.  So that's how that went.  And it went that way several times.  There's apparently a bit of a trick to getting popcorn to stovetop pop.  I tried all the tricks and I was never satisfied with the popcorn.  Plus I had to stand there and shake the pan, which looks great in a Pinterest photo, but in real life I don't want to spend any more time on a crappy snack I'm not even going to enjoy because it isn't potato chips, than I have to.

I didn't have any paper bags in the house so I couldn't pop it in the microwave.

Yes.  Yes I could.  I have no idea how I came up with this but I might have invented the greatest way to pop popcorn ever.  Especially if you have kids.

Once the popcorn is done popping, I add a tablespoon of butter onto the plate on top, which is hot enough to melt the butter, then I just tip the melted butter into the popcorn. Add salt. And enjoy.

When I say "enjoy" I mean eat. Popcorn is eaten. Potato chips?  Potato chips are enjoyed.

Have a favourite popcorn topping for me?  Lemme know!