After introducing you to The Coop last week, I realized I made it look too easy.  I mean, first there was no coop, then there was a perfectly completed coop.  Like magic.

It was not magic.  It was work.  There was sweating and swearing and snacking.  Often all at the same time.  Sometimes in emergency situations I even snacked on my sweat.

So I thought it would be nice to take you through the building of the coop from beginning to end so you get an idea of what's involved in case you're thinking of building your own coop.  Which I don't advise you do if you have children, pets, a spouse, laundry that needs to get done, a job, a need for more than 5 hours sleep a night, an aversion to possibly maiming yourself, or any semblance of sanity.

Get a hammer.  You'll definitely need a hammer. 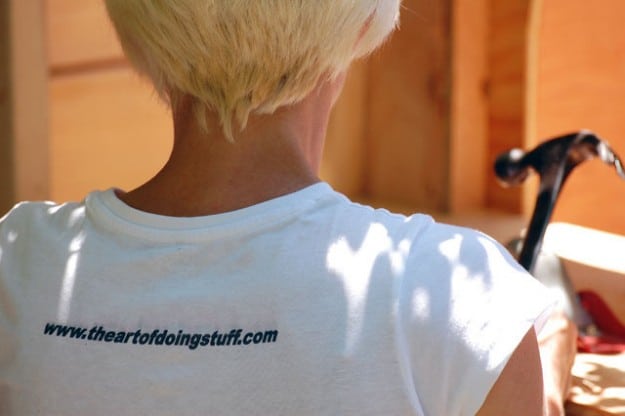 Call your sister. The one with the pink, suede toolbelt and the Chanel safety glasses.  You know, the one who matches her work gloves to her tee shirt. 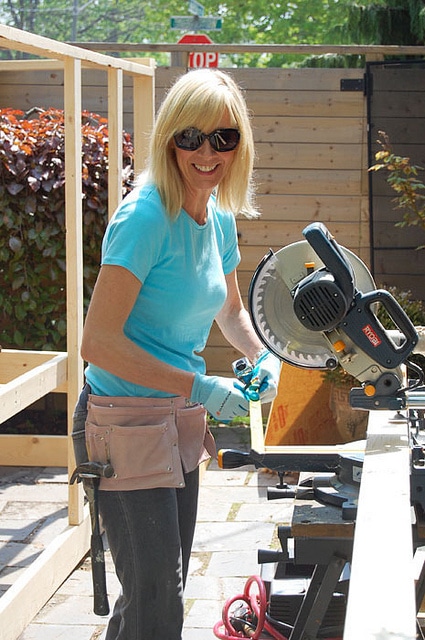 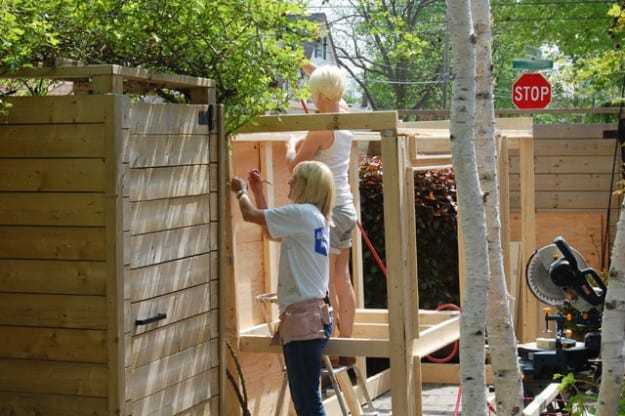 Once the frame is completed, you might want to look into bringing in extra help. 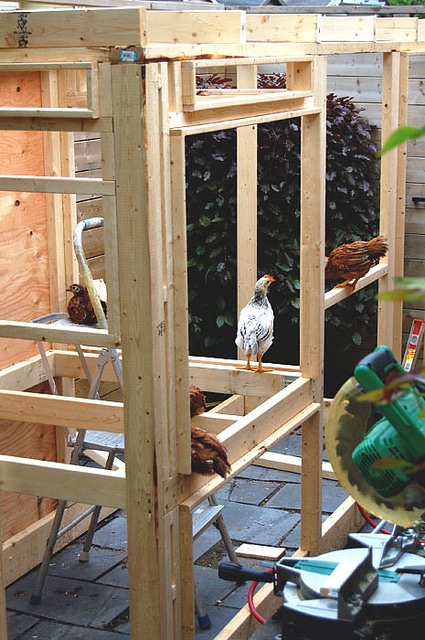 Probably check their credentials first.    These guys started out strong ... 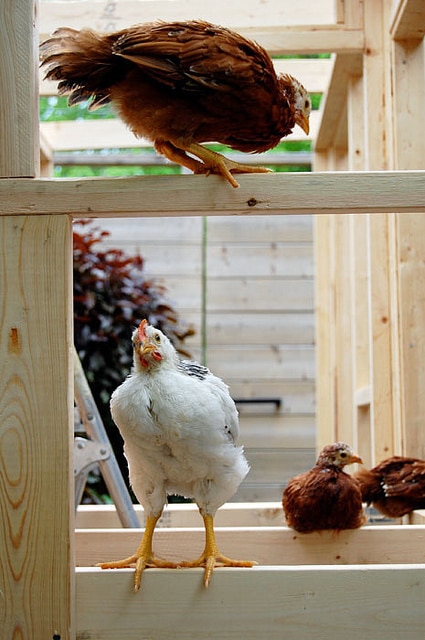 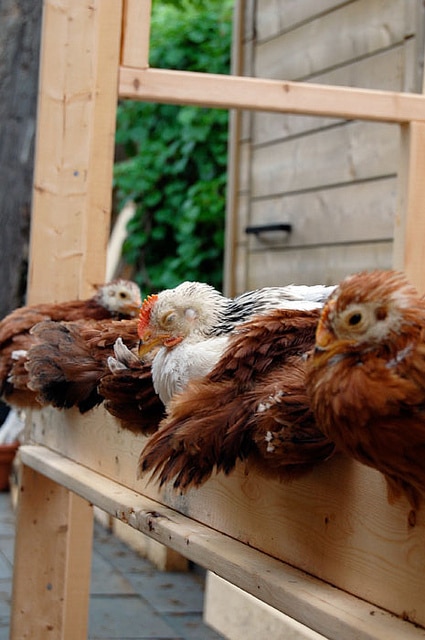 Once the framing is done you can start on putting up the plywood. 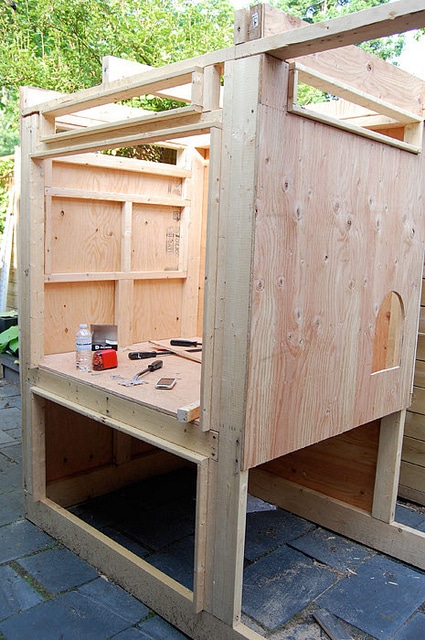 This is the point where things get exciting and you run around the neighbourhood high fiving random people because your structure finally looks a little bit like an actual building.  Since coops may or may not be legal where you live, you tell everyone you're building a cabana, or a shed, or a landing pad for possible alien lifeforms.  Anything but a chicken coop. 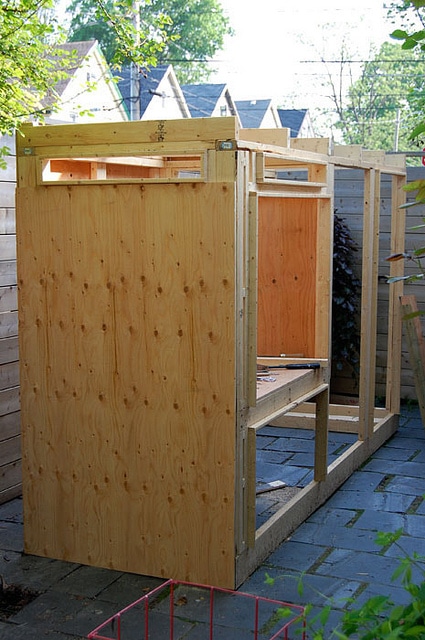 Once all the plywood walls are up, you can tackle the roof.  The roof is an asshead. 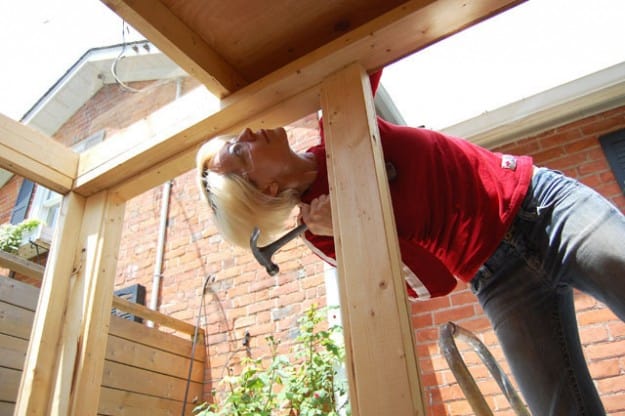 At this point people will start congratulating you on your completed coop. They will say things like "Almost done now!" and "Not much more to do!".  They're liars these people.  Or stupid.  Or both.  I'm referring to my sister in the pink tool belt by the way, who from this point on in the building process kept saying "Wow. It's almost done".   She would continue to say that for the next month and a half.  Less convincingly as each week passed.  Finally by the time the coop really was almost built she was afraid to say anything and mainly just blinked at me. 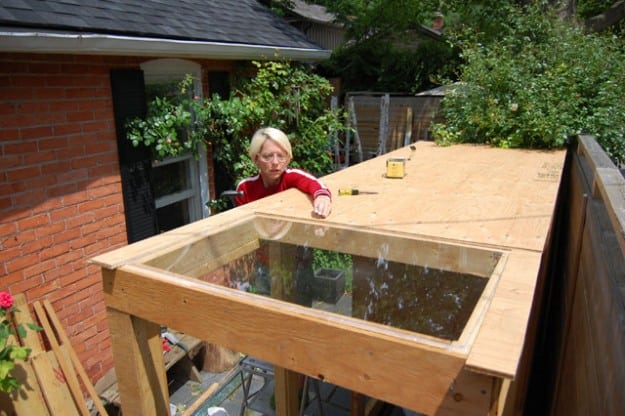 Taking a cue from the foreman (who if you didn't notice is actually a chicken) ... take a little nap.  While standing on a ladder.  Fondly remember a time when you didn't wear ugly jeans paired with an Olympics tee shirt and lime green crocs. 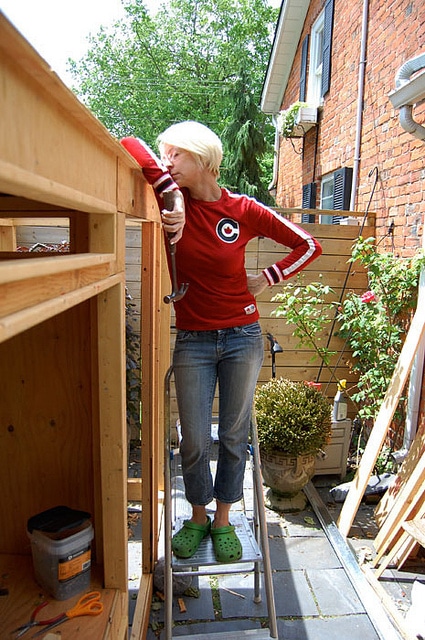 Then one day - everything will get kicked into overdrive - as you realize the chickens CANNOT live in your potting shed any longer.  Since they're almost full sized chickens who happen to be able to wreak havoc everywhere they go. 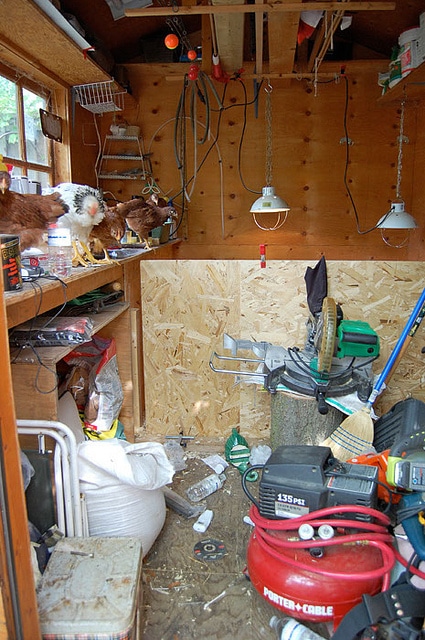 See?  Too big to live in a potting shed.  Big enough to peck your eyes out. 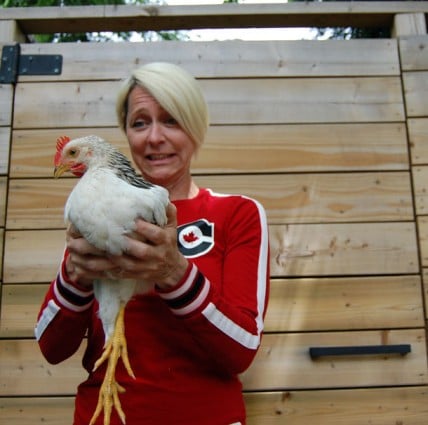 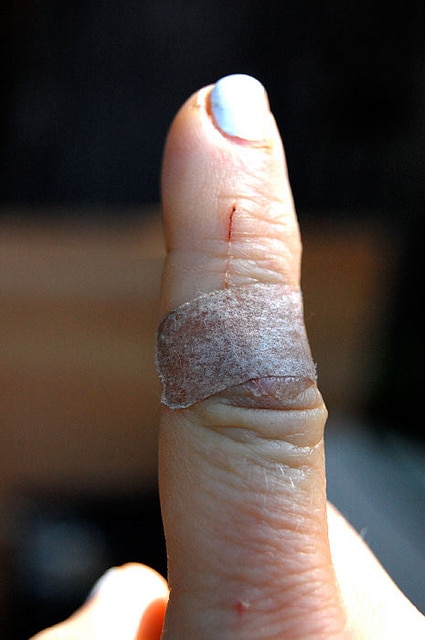 Build a screen door.  Because you need a door.  So you have to build it.  I know.  Weird.  Building a door.  Almost done now!  Uch. 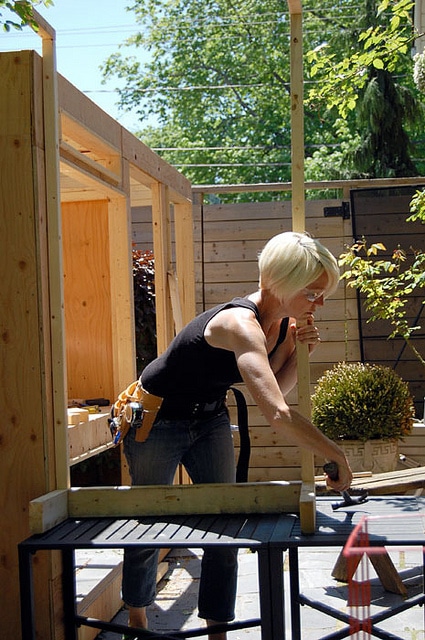 Handy little tip!  If you're cutting anything, put a big cross through the piece you want to get rid of.  This helps for when you bring the wood over to the saw and can't for the life of you remember what part of the wood you're supposed to cut away. 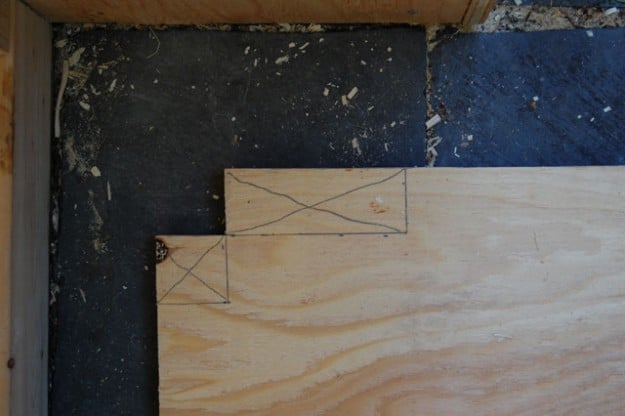 Handy little tip!  If you have to cut a straight line but don't have a table saw, use a circular saw with a long straight edge clamped to it.  Run the skill saw along the straight edge and you'll get a perfectly straight cut. 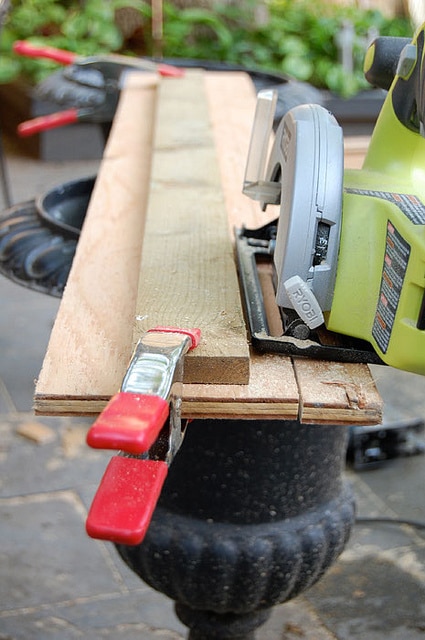 Handy little tip!  Take time to snack.  It's important to snack.  Especially on Ruffles and dip.  Twice during the course of this build people randomly dropped off Ruffles and dip.  Actually they didn't drop them off so much as throw them over the fence and drive away fast.  You might find at this point in the build, people begin to perceive you as "cranky".  Shitheads. 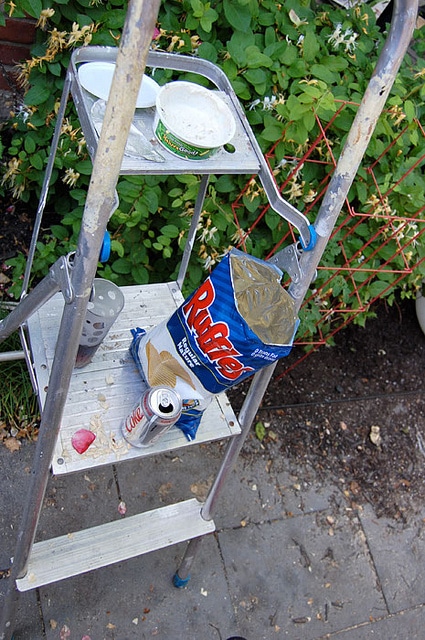 Once you get to the point that you're hand staining and rubbing all the spruce you're using as siding, you might develop narcolepsy.  Go with it. 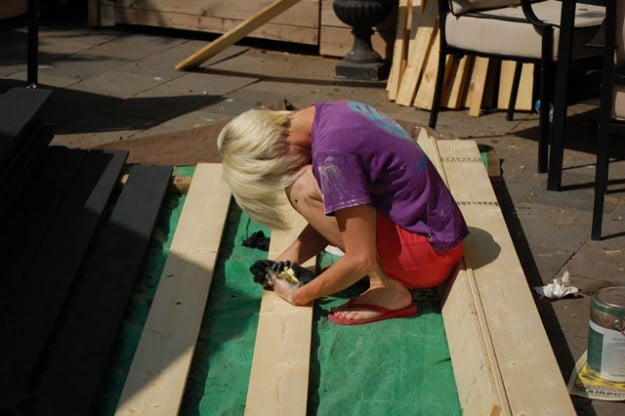 Once your siding is up you'll think, It's done!  It's really done!  It isn't.  It really isn't.  Sure your hardware cloth is installed and it looks like a chicken coop basically, but you still have to paint the inside, install a few perches, pick out, shop for and install a bunch of hardware and add the trim.  Work, work, work. 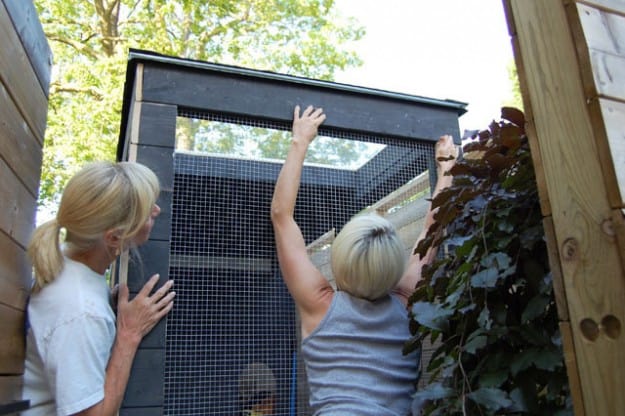 Precious minutes will be stolen from you as you investigate who is responsible for this random act of comedy.  A hanging rubber chicken in your coop.  An extensive investigation (one phone call) reveals the culprit to be your mother. 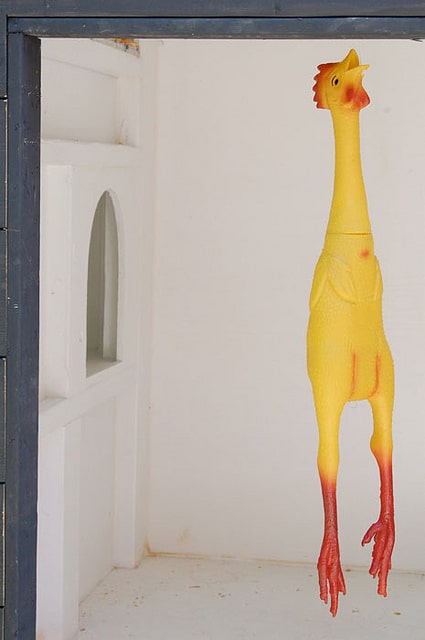 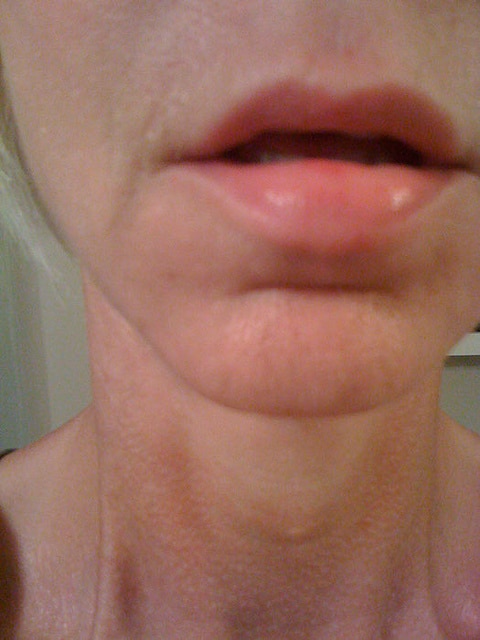 Trim the coop.  Paint the trim. 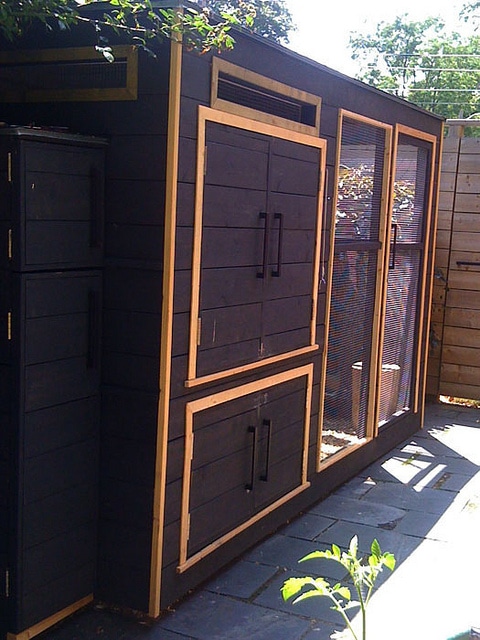 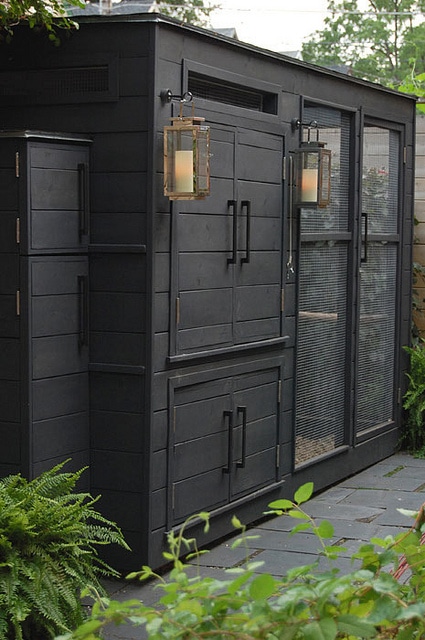 And THAT is how you build a chicken coop.  In a nutshell.  The things that end up taking a lot of time I don't have pictures of.  Like figuring out how to build doors that'll work, drilling out holes for the door latches to fit properly, chiselling away at stuff so it fits better, deciding on the best way to install the hardware cloth, nailing in the siding so that all the edge line up perfectly around the entire circumference.  Stupid stuff.  It's the stuff you don't see, the stuff you don't think of that takes time.  Well ... that and the fact that I've never build anything even close to resembling a building before.

I could NOT have done it without these people who helped along the way.

My fella.  Who randomly woke up one morning, bought all the materials and starting framing the coop.  He quit ... but he got the job going.

My sister with the pink tool belt.

Interior designer Carol Reed  who held my hand and confirmed my colour picks when my sister wasn't around to ask.

My chickens.  You never saw a chicken who could wield a hammer like Tuco.

And all of you who sent me coop pictures and encouragement all the way through.

Thank you to all.