In a land far, far away there are ponies who ride bicycles, cats who carry briefcases and chickens that play on swings.

Again.  I kindda feel it’s necessary to reiterate … that land is far FAR away.  Like, super-far.  End of a black hole far. 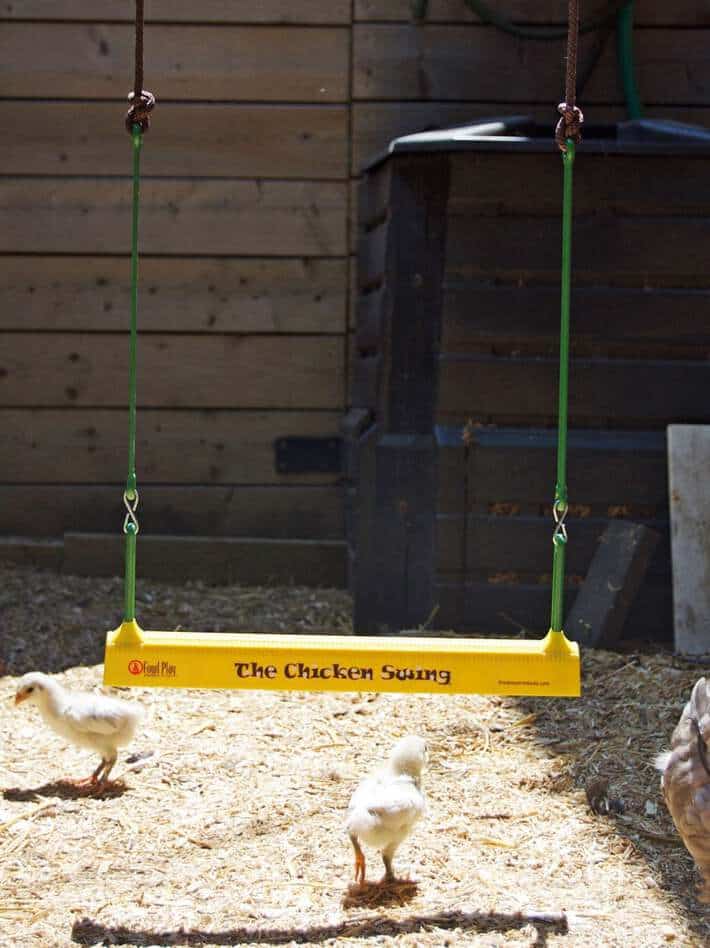 Some time around Christmas a reader told me she’d like to send me a present.  Well, not me actually, my chickens. She’d seen a Chicken Swing for sale and was dying to know if chickens were really swingers.

Well according to the website for The Chicken Swing, they are indeed the swingiest of the swingers.  Swaying to and fro on their chicken swing.  Here’s their video proof.

The swing isn’t only for the chicken owner’s amusement, chickens get bored, especially in the winter and they like to have things to do.  That’s partly why they scratch around in the dirt so much.  It’s entertainment for them.  The chicken swing is supposed to help combat coop boredom.

According to the manufacturer it’s easiest to teach a young chicken new tricks so I started with the youngest chickens I have and worked my way up to the older ones.

This was going to be very easy because I follow instructions well and I’m very smart and I have a blog that shows people how to do stuff.  So.  Easy.

This is how it went for me. 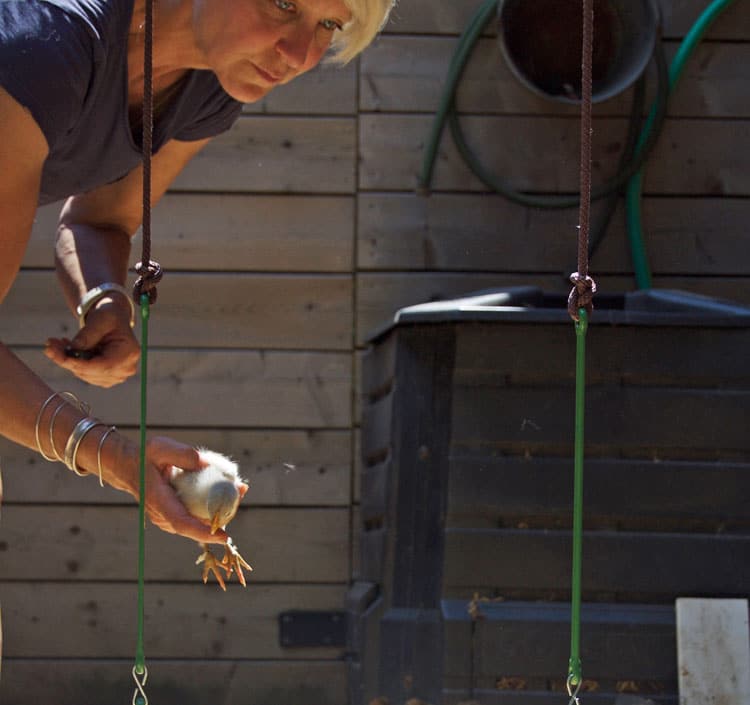 Walk over to the swing with the tiny chicken and … 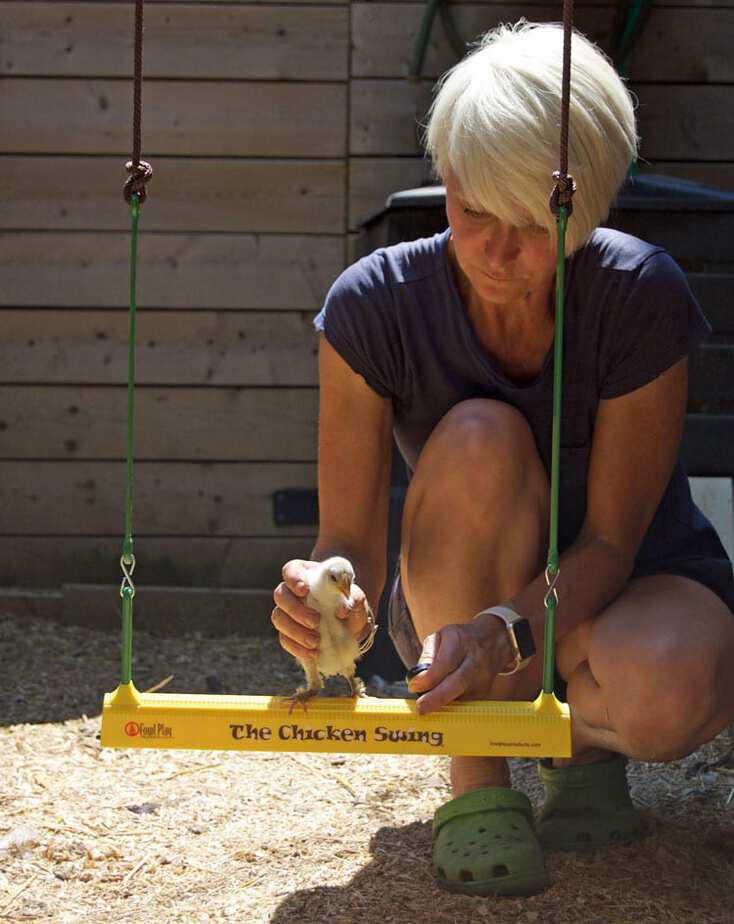 … gently place the chicken on the swing while holding the swing steady. 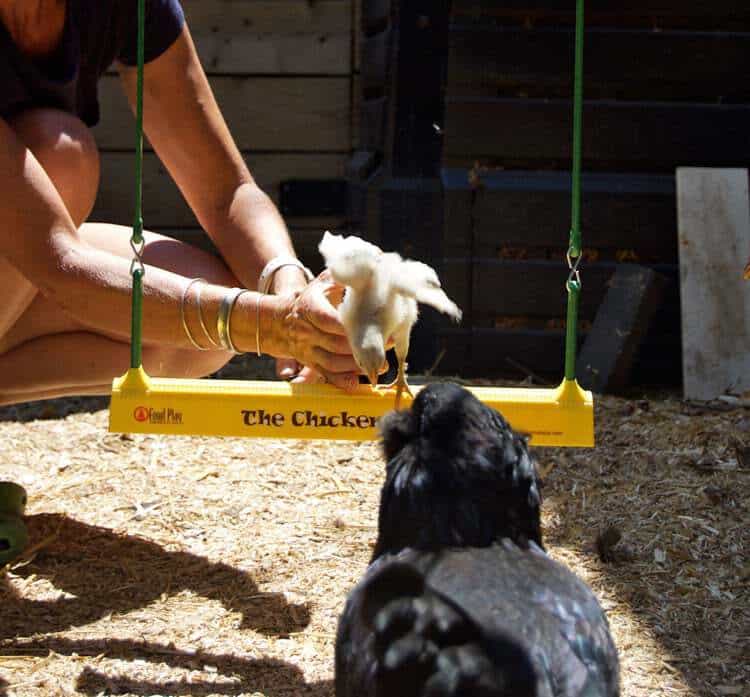 Watch as chicken immediately jumps away and off of the swing without so much as the stink eye. 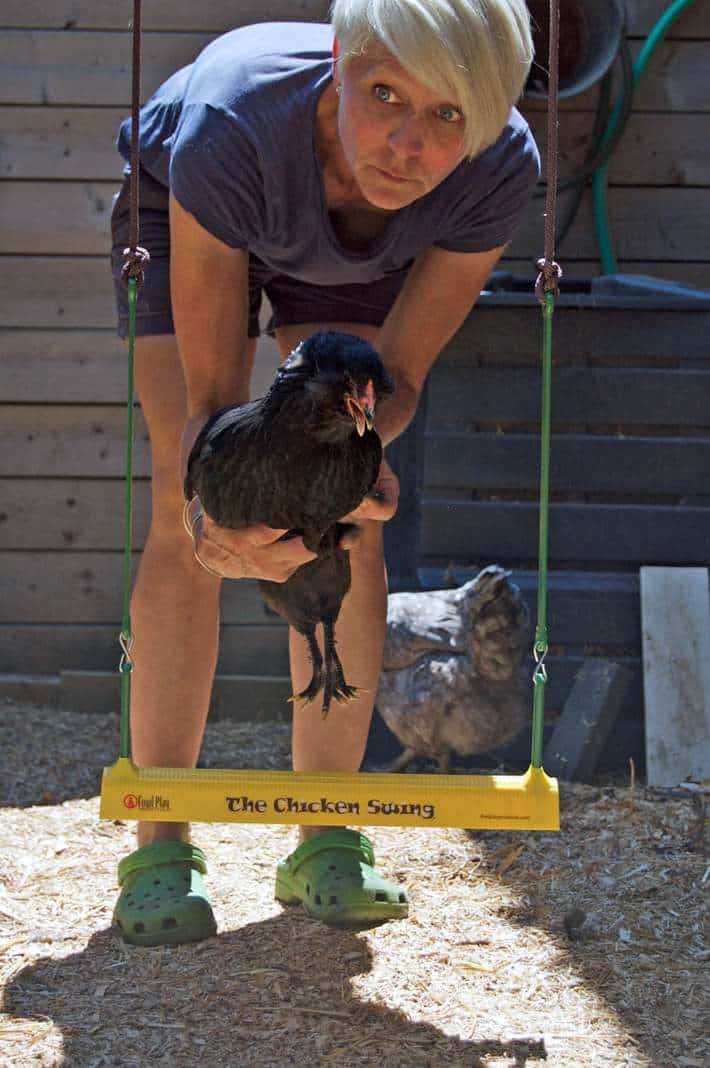 The little ones might just be a bit scatter brained so I head over to Sweetie.  My 2 1/2 month old hen who is terrified of air, let alone a swinging, swaying artificial cob of corn.

Sweetie jumped away so fast there isn’t even photographic evidence of it.  Ditto for Cheez Whiz and Josephine. 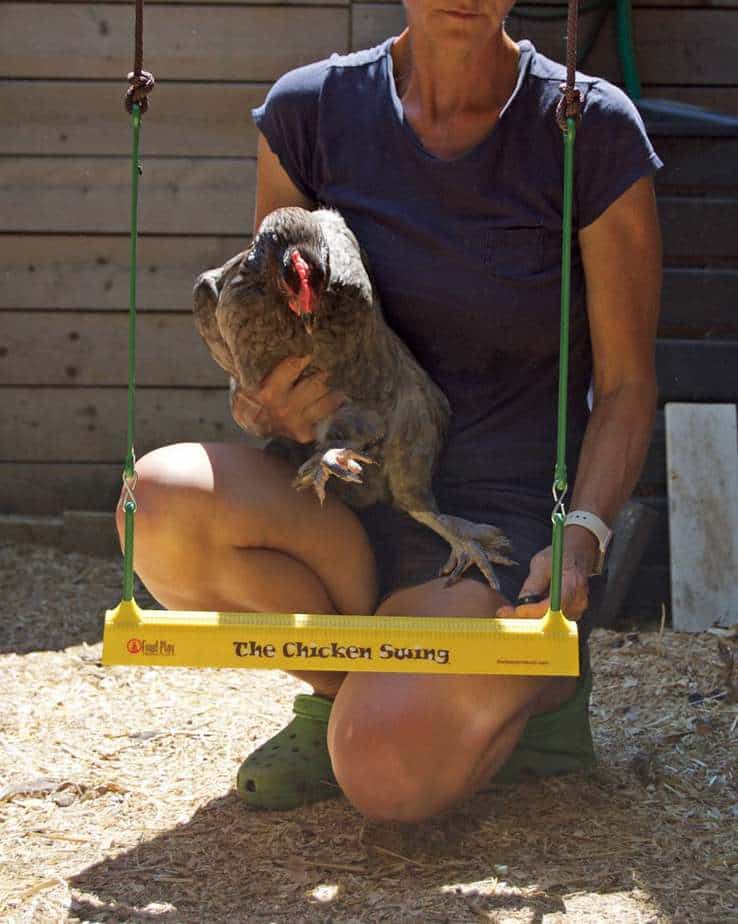 That left Mabel who is pretty chill.  The second I got near the swing with her, Mabel started back peddling into my underarm.  I calmed her down, talked to her soothingly then slowlyyyyy moved her in the general vicinity of the swing.

At which point she flailed like a banshee, scrambled up my legs and ran under a tree.

So that’s how that went.

Here it is in video.

I kindda knew this is how it was going to play out.  A chicken isn’t  likely to just jump up on a swing and start whipping back and forth any more than a cat is liable to pick up a briefcase and walk out the door.  So I went to the website, read all their tips on how to get a chicken to use the swing AND looked up the Chicken Swing reviews on Amazon.  It turns out the swing gets GREAT reviews and you just have to be patient.  Even then all your chickens might not use it but the adventurous ones seem to and they apparently  genuinely like it.

I figured when I first saw chickens swinging that they only swung back and forth like lunatics because they were too afraid to jump off.  Again, according to the Amazon reviews this doesn’t seem to be the case.  Chickens are swingers.  Willingly.

I’m going to leave the swing in the coop and go through allll the steps outlined on the Fowl Play website very slowly to get the chickens used to it.

I will let you know when my chickens are officially swingers. Since they don’t drive, I’m not sure how we’re going to have the key party, but we’ll figure it out.

Click here if you wanna buy The Chicken Swing!