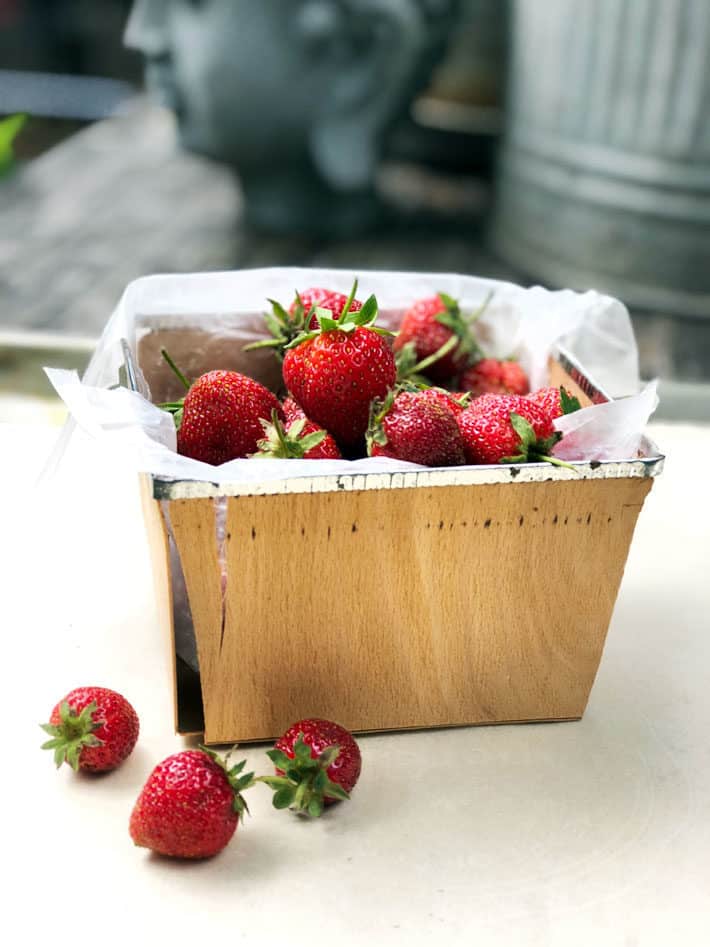 I would like to take a moment to criticize something I like very much.  Pinterest.  It’s a useful tool that has way better imagery than say … Google images. If I want to take a look at a few examples of rustic modern pergolas, Pinterest is the place I go. If I want to get examples of really great Brooklyn-style flower arrangements – Pinterest.

What I do not go to Pinterest for are recipes. I say this as someone who has many of her own recipes and DIYs on Pinterest.  My Crispy Sweet Potato Fries recipe has been pinned over a million times.  Over. A. Million.  That’s insane.  BUT I’m not a food blogger specifically so I really only publish recipes that I know are fantastic.

Food bloggers on the other hand, have the pressure to publish 3 new recipes a week.  That’s 156 new recipes a year.  They can’t all be lip smacking slam dunks,  but if the pictures are pretty enough they’ll make the rounds on Pinterest until they make their way into some unsuspecting cook’s kitchen and eventually their garbage can.  I’m not blaming food bloggers or judging them. It’s their job to put up content and that’s what they do. 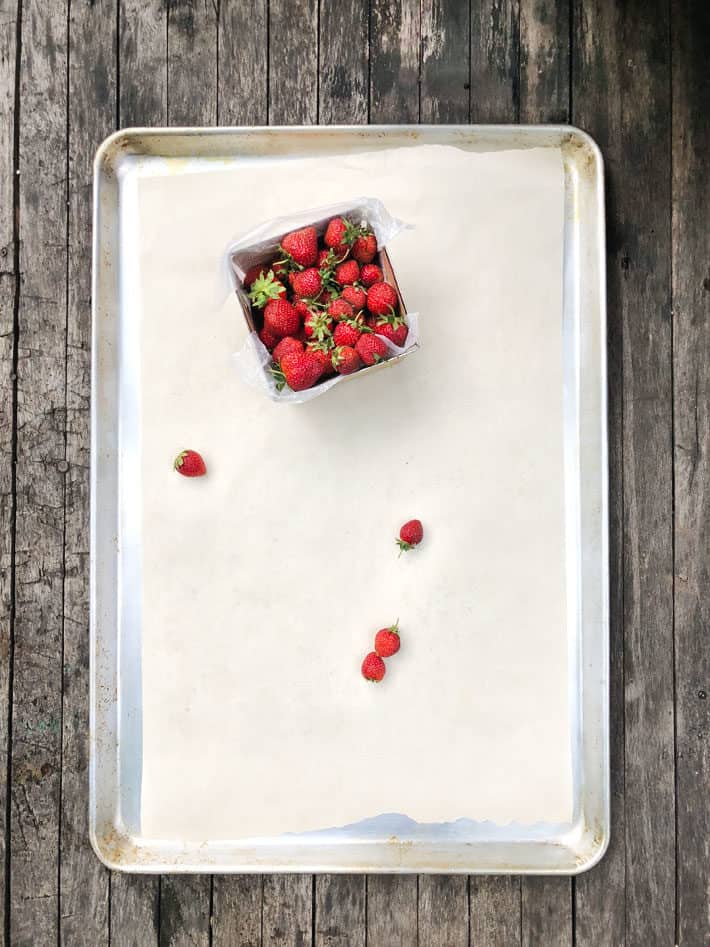 So it was with much cynicism I took a Pinterest recipe I’ve been eyeing for a few years and made it myself. It’s not even a recipe so much as a technique.  Drying strawberries.  According to Pinterest they taste JUST LIKE TWIZZLERS when they’re dried. 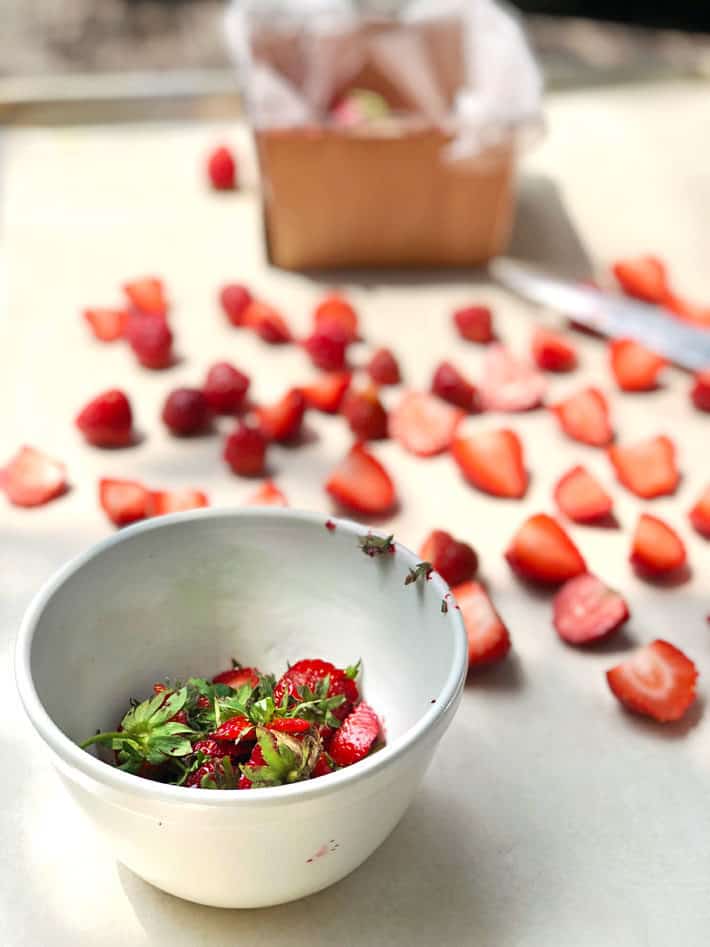 These are the same people who claim cauliflower can be substituted for virtually anything in a recipe.  Need a no carb pizza crust?  Cauliflower!  Mashed potato substitute? Cauliflower! Want low calorie pancakes? Cauliflower! Need chocolate syrup? USE CAULIFLOWER!

If you were to believe Pinterest, cauliflower is basically the only ingredient you need to make a 3 Michelin star meal as long as you own a food processor and really good camera. 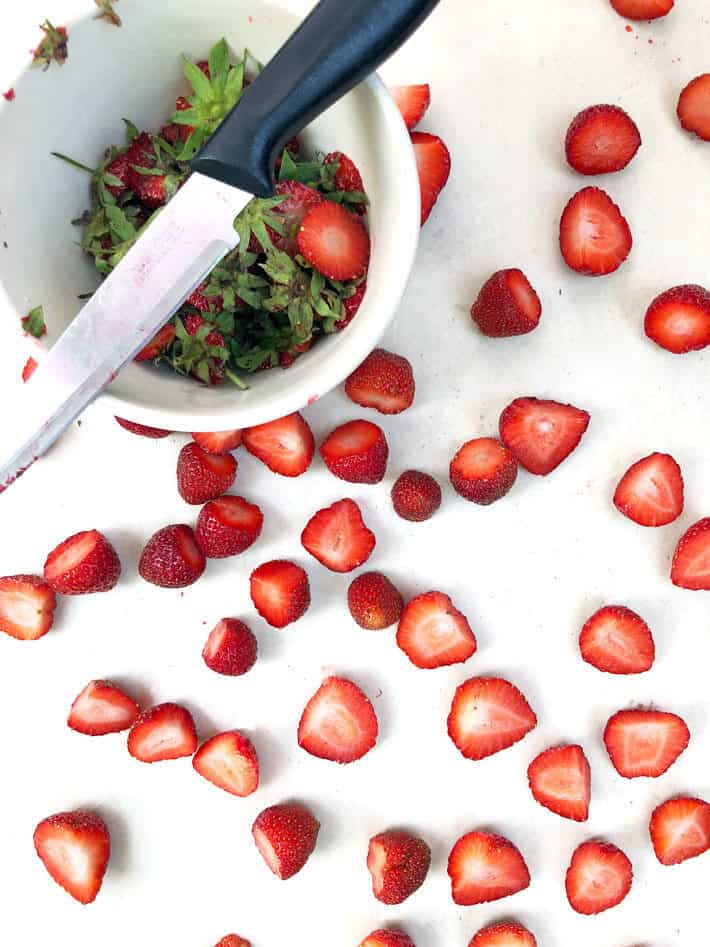 Yet I couldn’t stop thinking about the Pinterest strawberry candies. 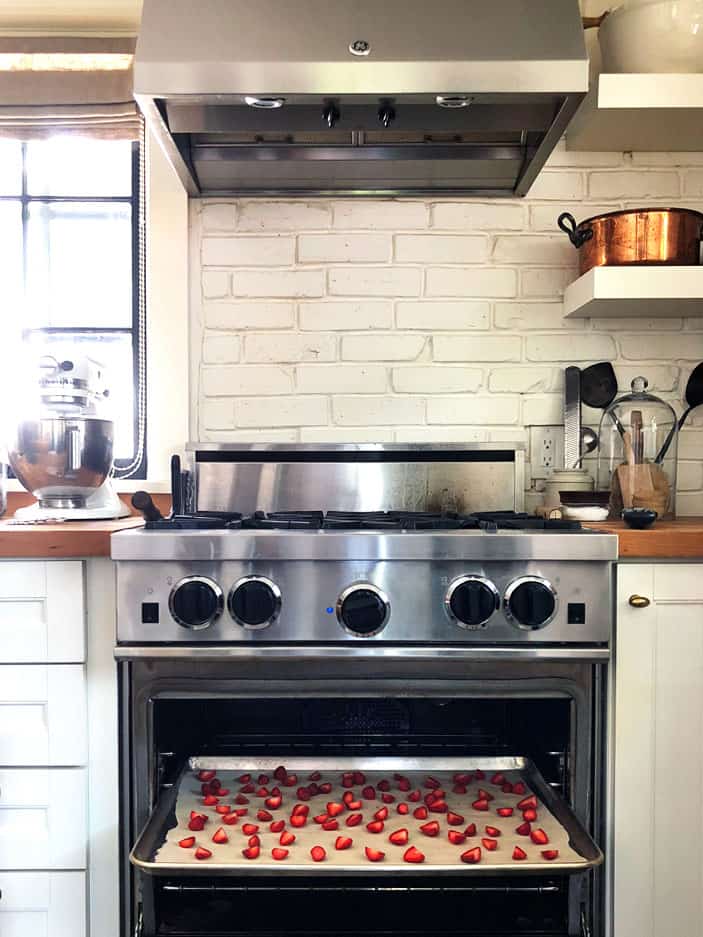 So I did what they said. Mainly because I have so many strawberries growing right now that my thighs are looking very much like sponge cake.

I cut the tops off all my strawberries, cut the  bigger strawberries in half, stuck them on a baking sheet lined with parchment and dried them in the oven for 4 hours.  I flipped them after 2 hours. 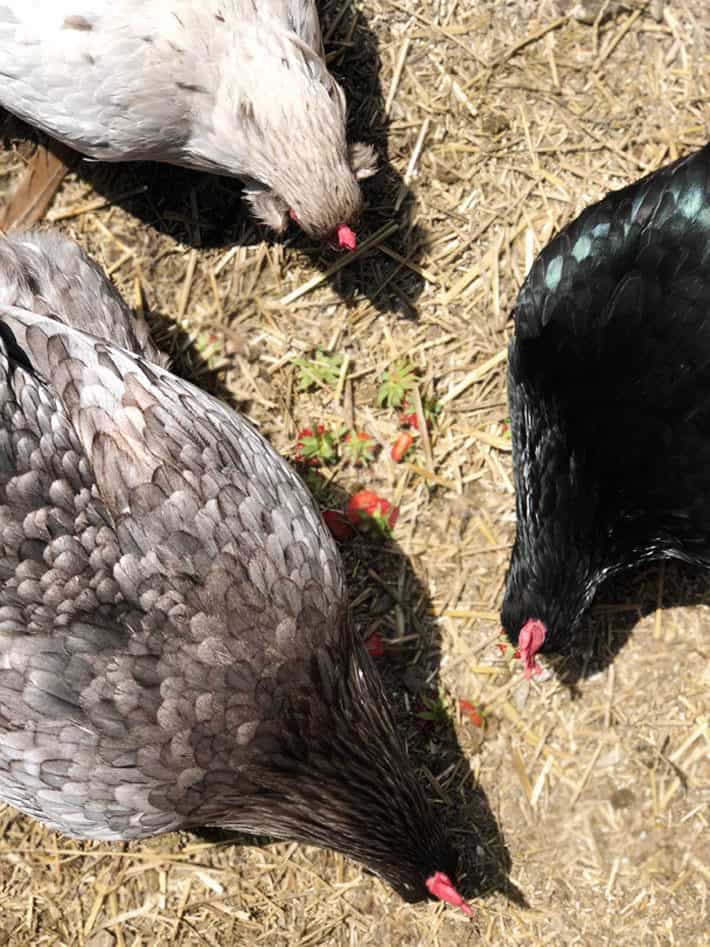 In the first hour my chickens feasted on the strawberry tops, and my house smelled like strawberry jello. 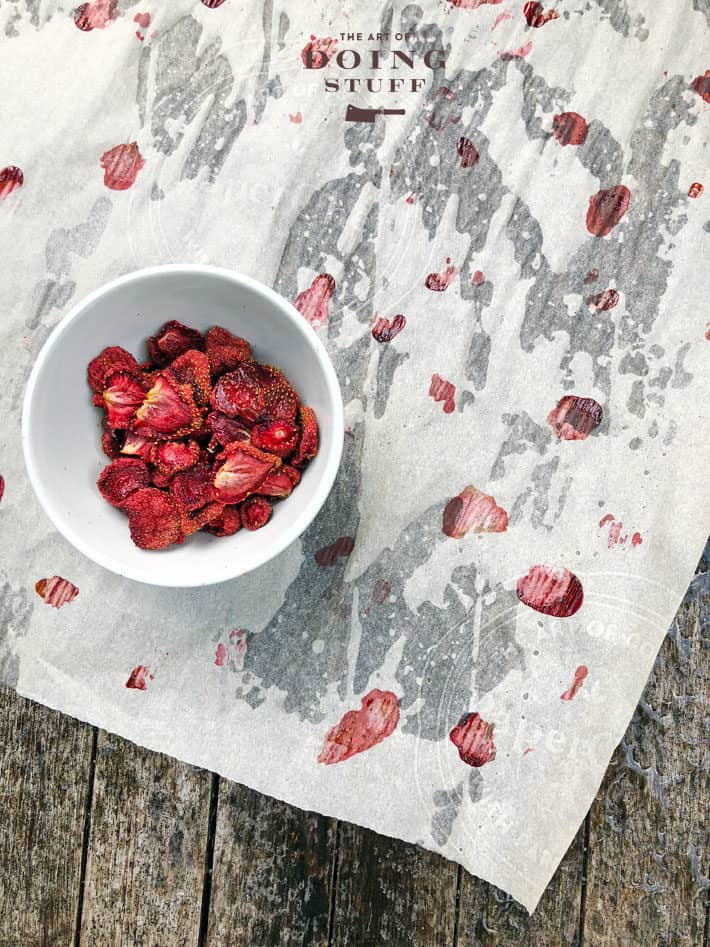 After what ended up being around 3.5 hours in the oven they seemed done.  So I took a photo. 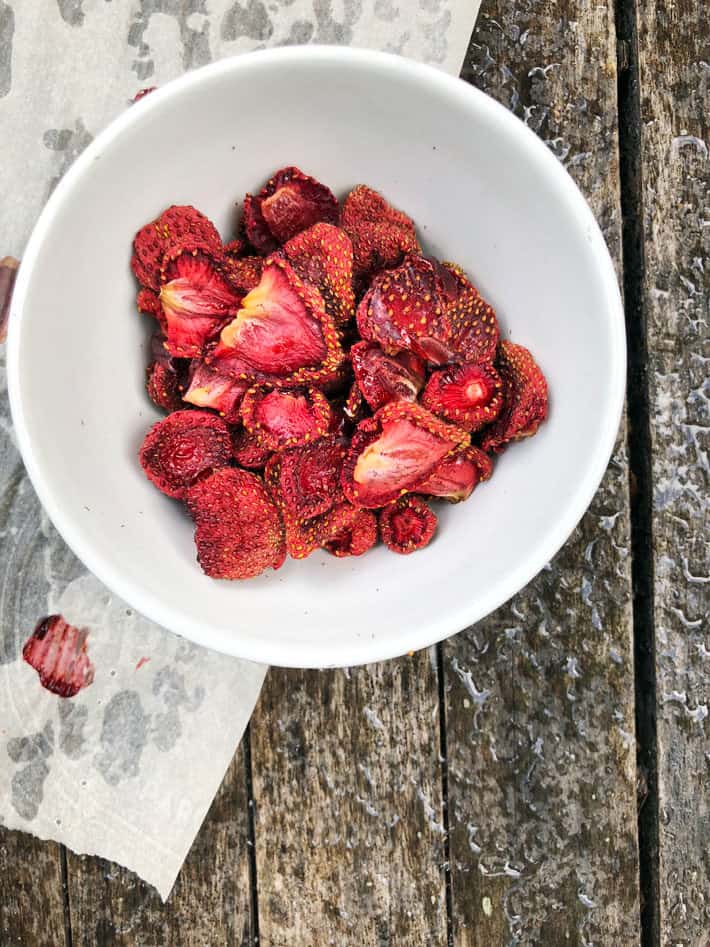 Because it had just rained, and they looked pretty and who doesn’t want a Pinterest worthy recipe that could be pinned 1,000,000 times?

Also as a blogger it’s my job to take before and after photos.

But were they good or gross?  They were neither.  They 100% did NOT taste like Twizzlers.

I can’t see wanting to eat a big handful of them.  For one thing a quart of strawberries got me around 1/2 a cup of dried berries.

That’s a lot of work and time for a few big handfuls of dried berries.  Also these berries aren’t truly “dried”.  They’re kind of cooked because most ovens don’t go to a low enough temperature to truly dehydrate.  So you couldn’t make these and store them long term. For that you’d need a real dehydrator.

They’d probably be good in scones, oatmeal, pancakes or chocolate bark. But I’m not making any of those things in the immediate future.  At least not until I stock up on cauliflower. 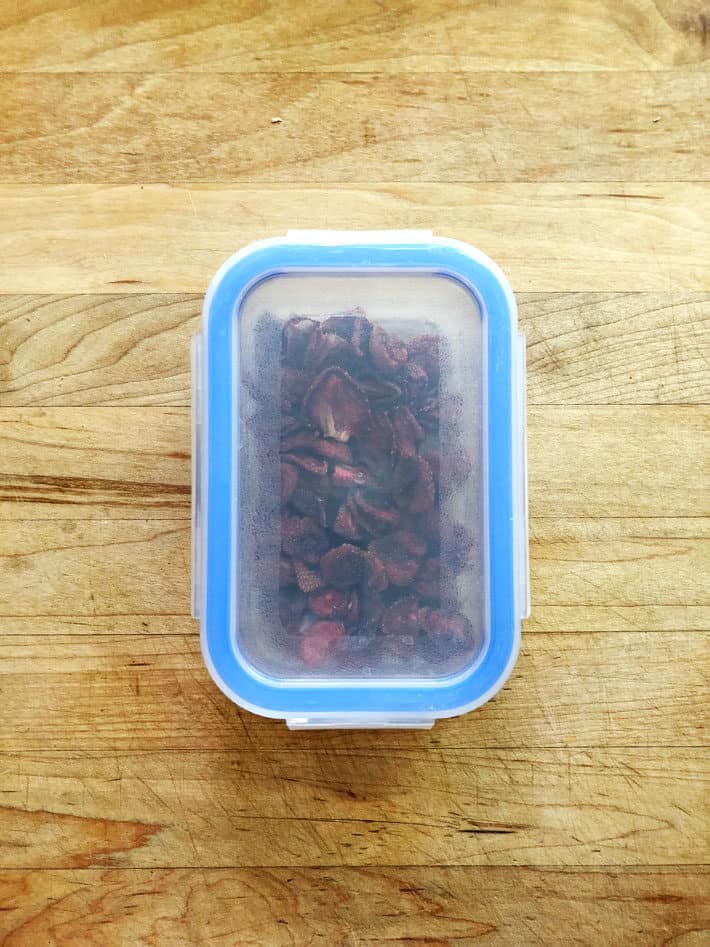 THIS is what dried strawberries look like in a real home in real life.  Pinterest worthy? Nope.  Worth the time and effort (even though the effort is minimal)?  Probably not.

→Do you follow me on Instagram?  Don’t miss out on all the extra Art of Doing Stuff! ← 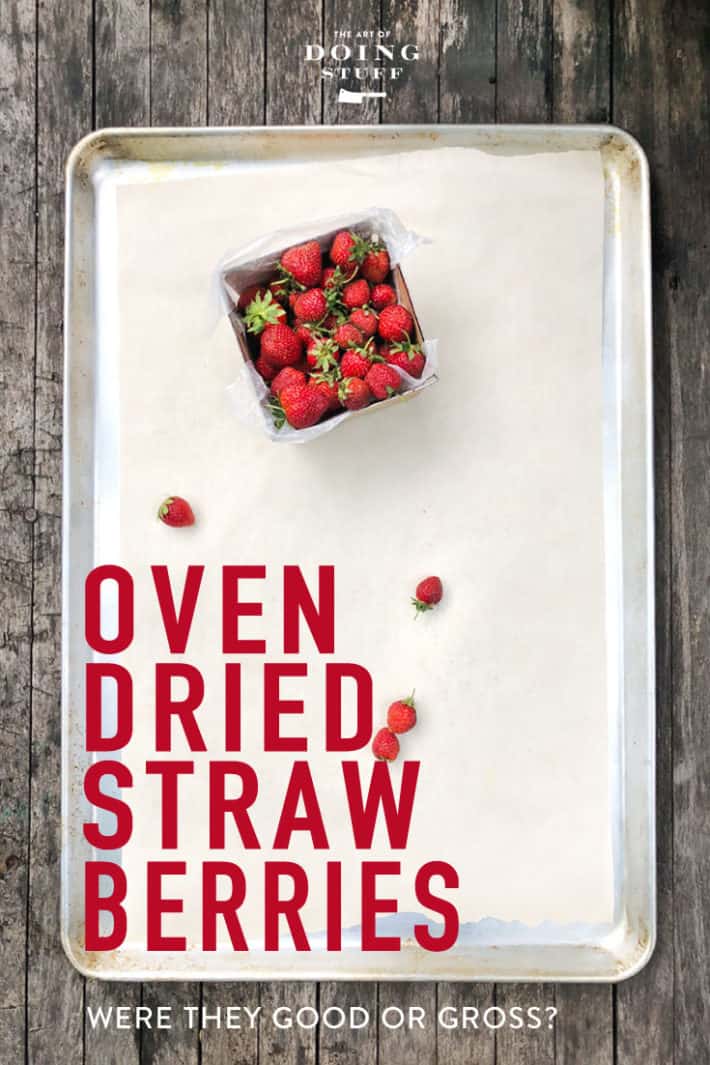