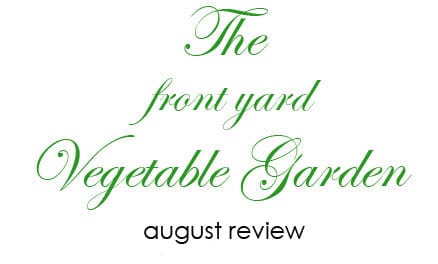 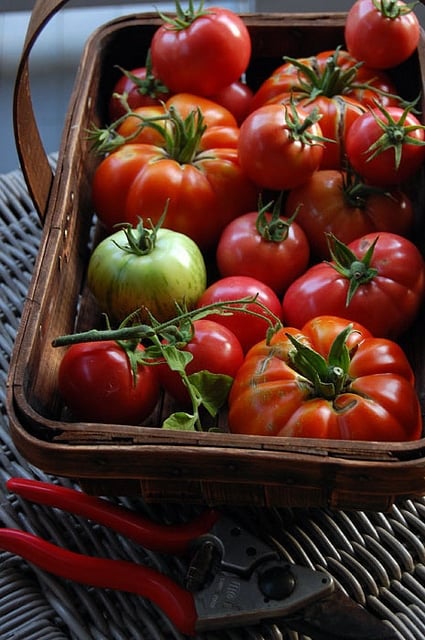 I just got in from talking with some of my neighbours outside and we were viciously attacked by some gnats.  They weren't biting bugs or anything but they were swarmy.  All kind of flitty and bothersome.  Like Bieber fans.

At around 7:30 tonight I sauntered down the street with that very basket of tomatoes you see in the picture above, handing them out to neighbours, strangers ... the homeless guy who lives in the bush.  I guess technically he's not homeless, he does have a home, it just happens to be a tarp.

Anyone and everyone got a tomato.  It's been a bumper crop.  The problem is ... they just don't taste as good as the ones I tasted at Tree & Twig.  I asked the owner,  Linda about that and she said it was probably my soil.  Apparently she has delicious dirt.  The amount and types of minerals and nutrients and compost and stuff you have in your soil makes a big difference in how the things you grow in it taste.  She's a proponent of Spanish River Carbonatite which is proven to increase the Brix count of what's grown in it.

Blah, blah, blah,  who cares, don't understand what she's talking about so I'm going to go play with cheese  now.  That's what you're thinking right?

All that means is, if you amend your soil with this stuff your tomatoes will be sweeter.  The Brix count is a measurement of sugar levels.  I learned all about it when I was teaching myself to make Maple Syrup this spring.

So even though this here front yard food patch is barely growed up, I've already started planning next year's garden. And it will include Spanish River Carbonatite. 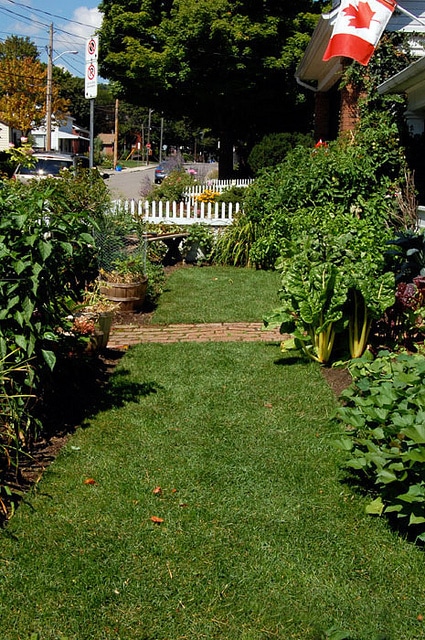 Wanna grow something that produces from spring until fall, has bright colours and never looks messy and floppy?  Grow Swiss Chard. It's the tall, upright plants on both sides of my path. 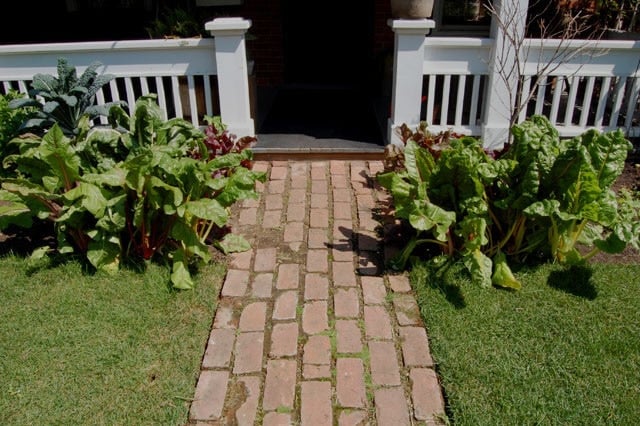 You might notice some bare spots.  That's where old vegetables came out, and new vegetables are still being planted. 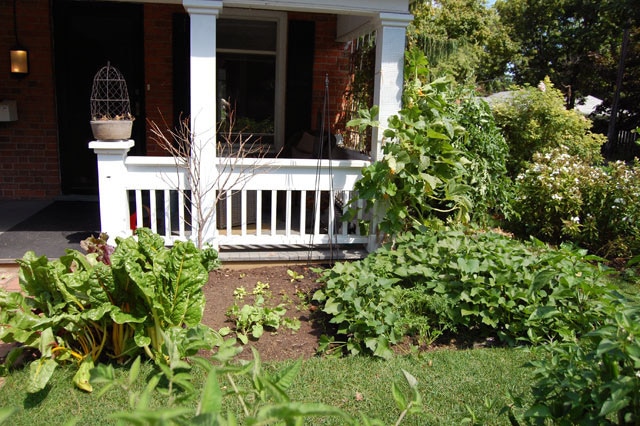 The famous Amish Cockscomb.  The most fantastic flower ever grown.  Want some?  Buy it from Tree & Twig here. 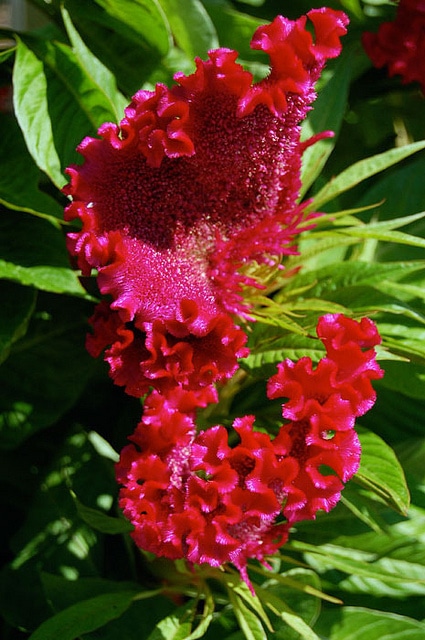 No idea.  If you know what he is ... lemme know.  They SWARM the Cockscomb every day.

Remember the Great Green Bean experiment?  Well, this is how the pole beans look less than a month later. 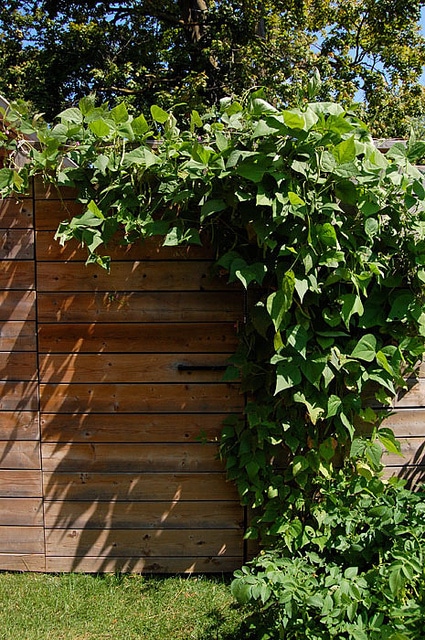 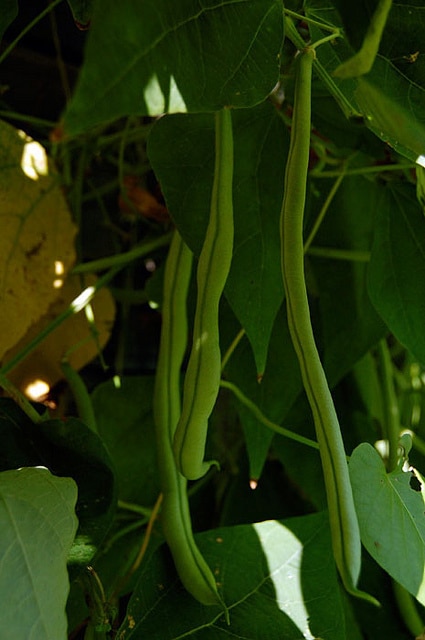 This is disaster corner.  Welcome to it.  I had planted 4 Zucchinis and every SINGLE one of them croaked due to a variety of ailments and pests.  The same pests got 3 of my 4 Acorn Squash plants.  For hours I hand picked Striped Beetles and Squash Bugs off my  plants only to have them up and die from a gross maggoty thing that bores into the stem of the plant and eats it from the inside out.  So you don't even know it's there!  Vine Borers are vile, parasitic annoyances.  Like Nickleback fans.

About the fans.  Not about Nickelback though.  Yeah, yeah, you're a big fan.  Whatever. They're no Barenaked Ladies.  This is about vegetables anyway ... 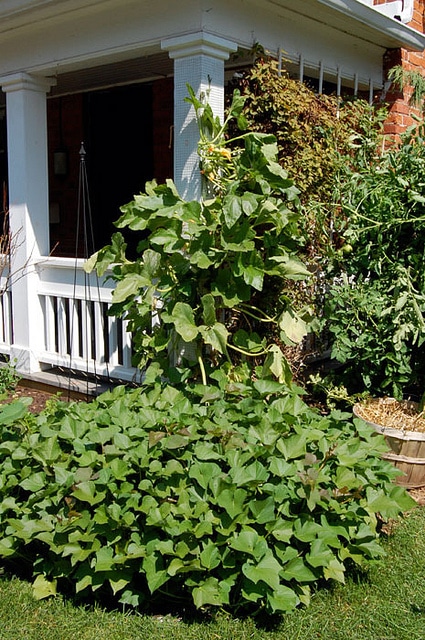 So I have managed to get a few acorn squash off of this one vine, but thanks to Squash Vine Borer I lost all my other vines. 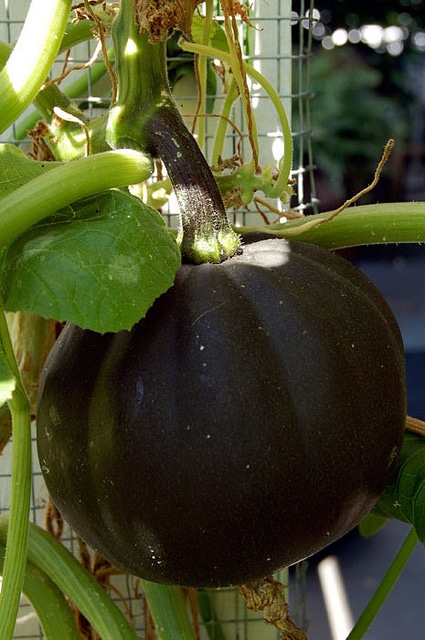 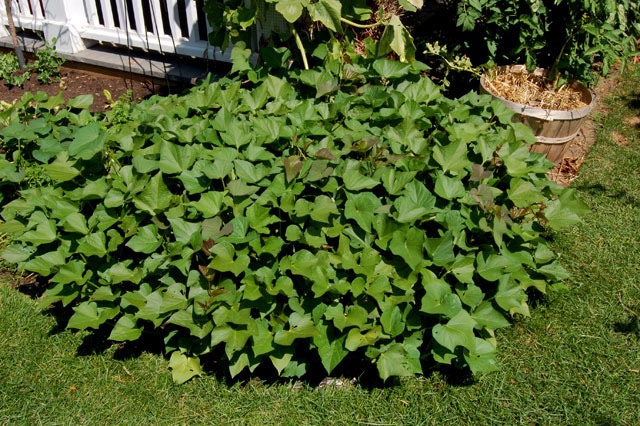 Green peppers which will eventually be red peppers. We've harvested 2 reds already and have another 15 or so on the 2 plants. 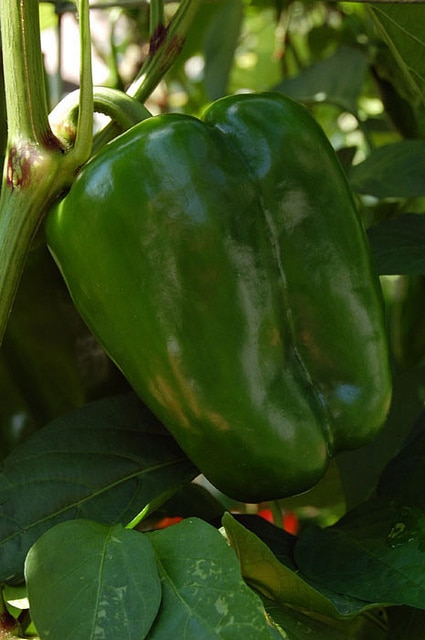 My biggest surprise has been the celery.  I will never go celeryless again.  Think about it.  How often do you buy a bunch of celery, use a few pieces and then let the rest of it wither then turn slimy in your crisper? Always.  You always, always do that.  Or maybe I always, always do that.  Regardless, growing celery is the perfect solution.  I go outside, pull of a few stalks and let the plant continue to grow.  I've been doing this all summer long and it thrills me every single time.  Also, celery from the garden is so crunchy it feels like the earth is moving underneath you when you bite into it. 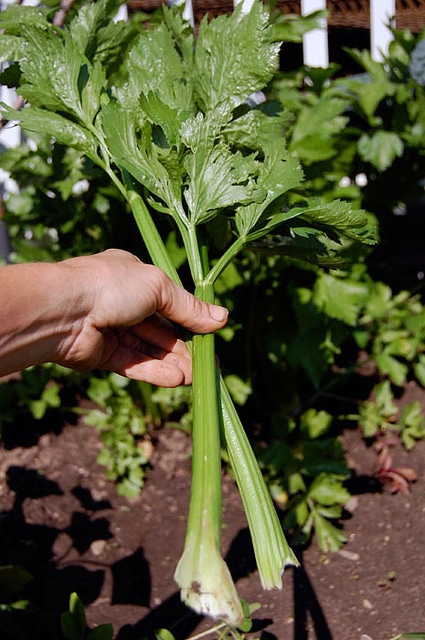 Tomatoes.  Yup.  Even though I don't really like them, I grew 4 varieties of tomatoes.  It's my way of trying to like them.  And growing them really has increased my appetite for these little suckers.  I ordered all of my seeds from Linda at Tree & Twig, OTHER THAN one variety.  I decided I really wanted to grow Black Krim tomatoes.  They're dark, dark tomatoes with a hint of saltiness to them.  So I ran up to my local organic seed store and grabbed a packet of Black Krim seeds.  They were the tomatoes I was most looking forward to.  I sold and gave a bunch of my Black Krim seedlings away, but kept one for myself.  I waited all summer for it to start producing tomatoes.  And it did.  That plant has produced more tomatoes than I could ever possibly eat.  It's about 8 feet high and COVERED in ... not Black Krim tomatoes.  Apparently there was some kind of mixup on the seed store floor which resulted in me growing some boring, round, flavourless tomato.

If I gave/sold you a Black Krim I'm sorry if it turned out to be a boring, round, flavourless tomato.  If you DID end up with a Black Krim ... drop a few off on my porch.

Dinosaur Kale.  Still doin' well after 3 months in the garden plus because of it's blue tinge it looks great too. Kale is especially good when it's grown in cold weather so I'm going to plant a couple of more plants and try my luck at some winter kale. 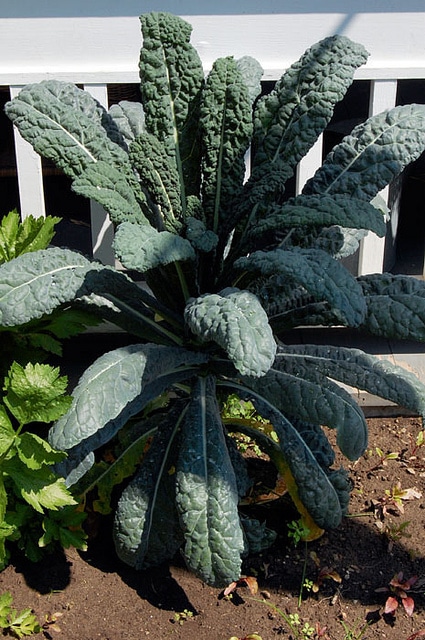 The last of the carrots.  These will be carrot soup by tomorrow. 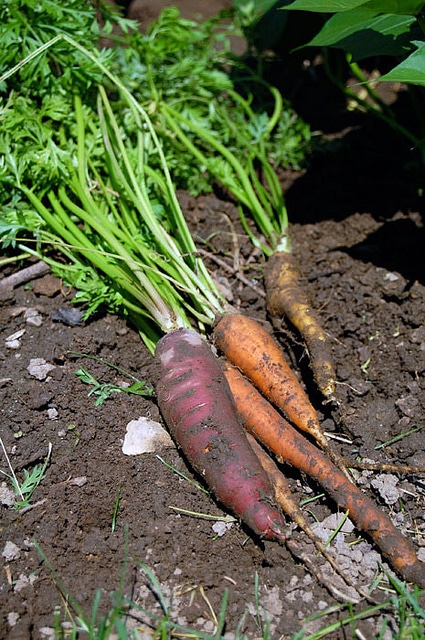 And these will hopefully be full grown carrots by the end of October or so.  I tried to plant succession crops with anything that does well in cool weather.  Things like carrots. 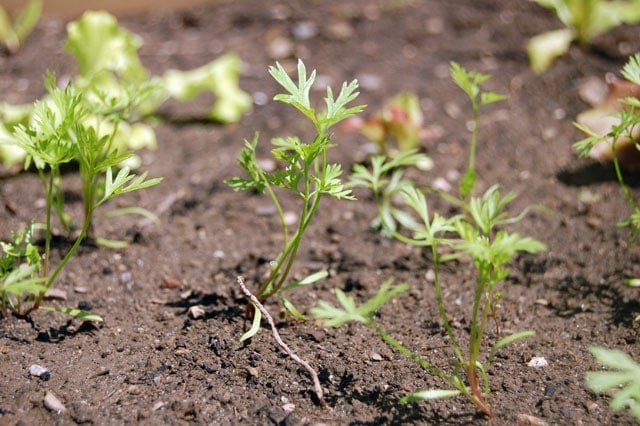 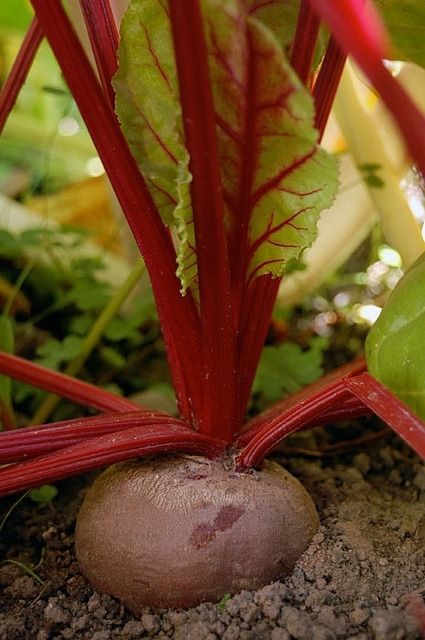 I still have a fair amount of beets in the ground, but I want to make sure I have beets to store for the winter so a couple of weeks ago I planted a bunch of beet seeds where my lettuce used to be. 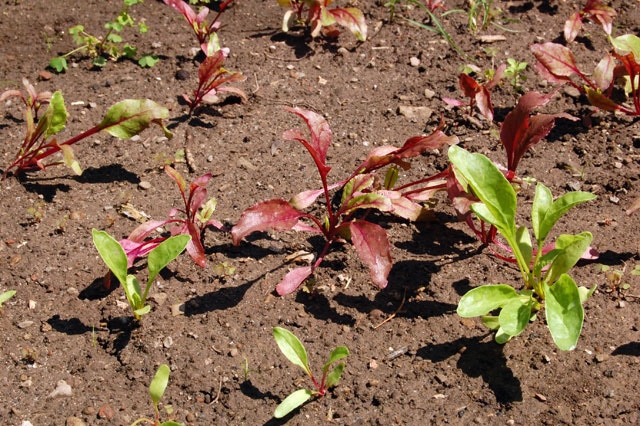 And since my lettuce is all gone, of course I had to plant more lettuce. 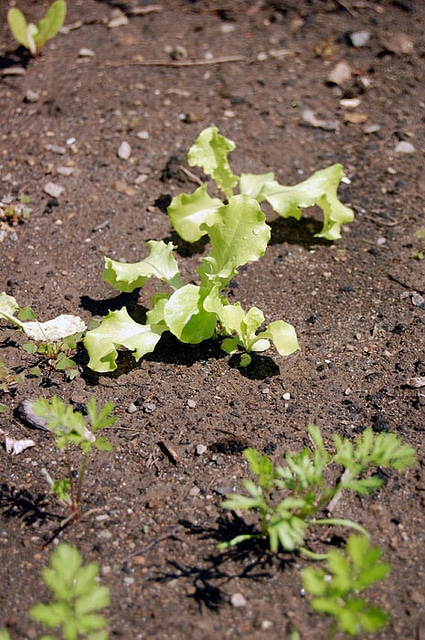 Another succession crop I'm trying is peas.  Not a single pea from my first batch made it into the house.  I sat in the dirt and ate the peas.  All of the peas. 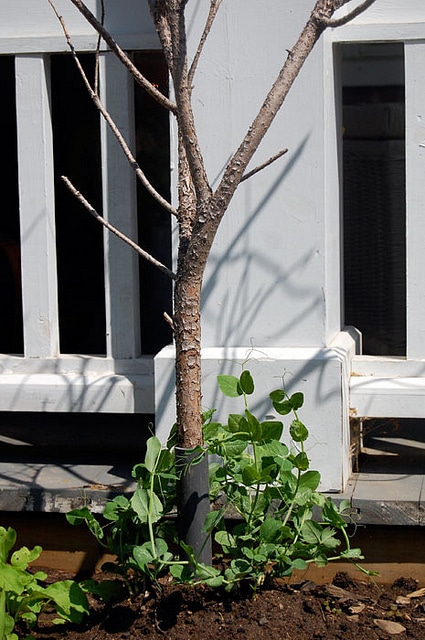 One of the plants I was ridiculously excited about growing was potatoes.  SO excited.  I experimented with a few ways of planting them to see which one worked best.  Some of the vines have already died back completely ... 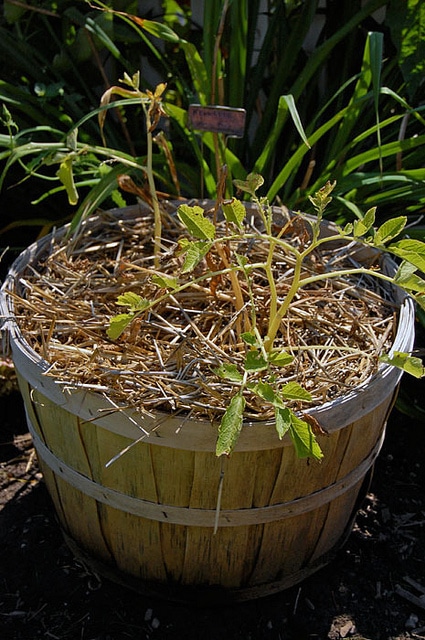 While others are still HUGE and green. 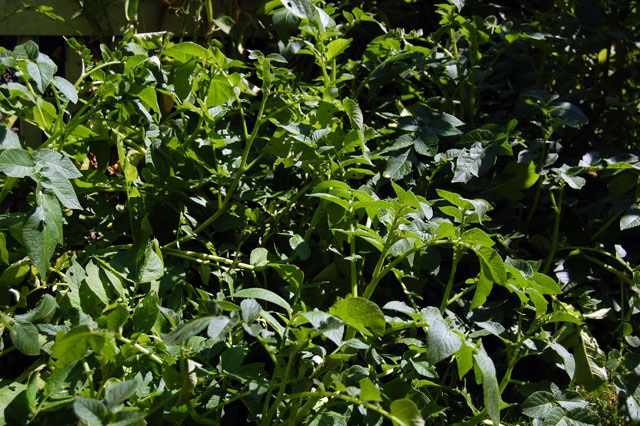 I couldn't help myself.  I had to scrape away the straw and dirt to see if there actually were potatoes under there.

Be still my heart.  There were. 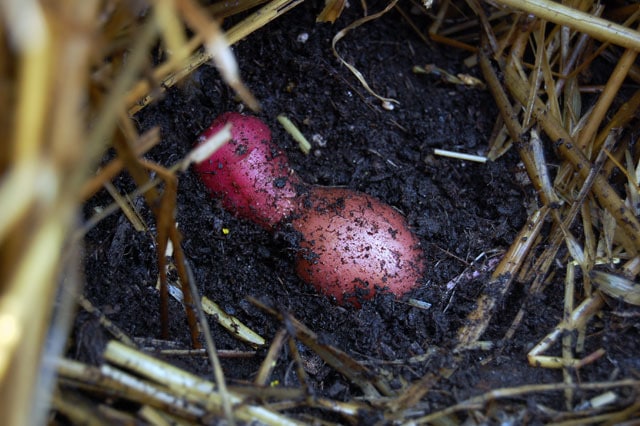 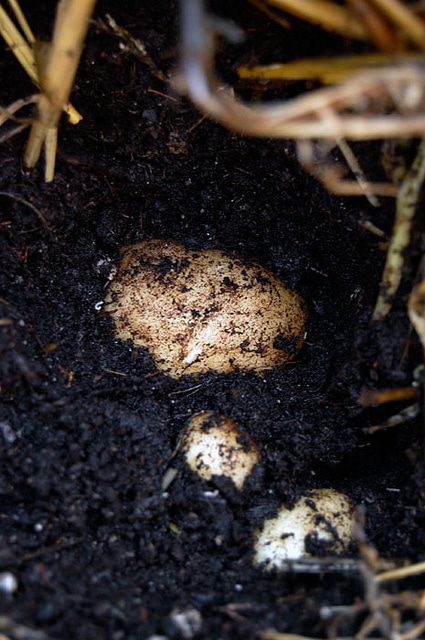 So the front yard vegetable garden I was worried the neighbours would shun me for has done the exact opposite.  I visit my neighbours more, dropping off extra produce, I talk with them more as they walk by and ask questions, I hear about how at first they were sceptical but have decided next year they're going to have a front yard vegetable garden too.

If I could get a Nickelback for all the people I turned into Beliebers I'd be rich.