Don't be embarrassed. We've all been there.  You made homemade pickles and they're so salty cows are wandering into your kitchen looking for the salt lick. And the salt lick is your lips.  Here's how to fix them. 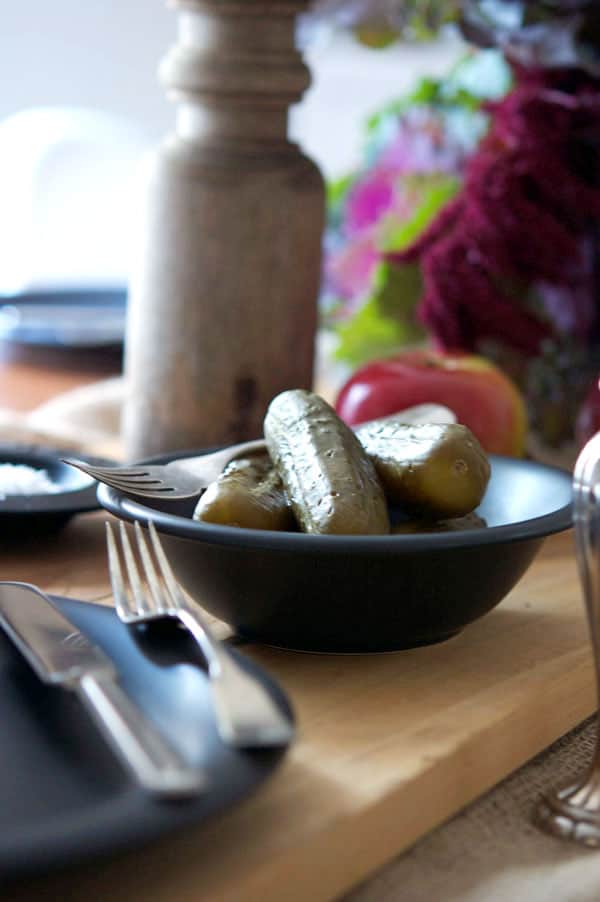 So you got your Laura Ingalls on and made homemade pickles.    You don't do this sort of thing a lot, but you've always wanted to make pickles so you did it.  You *finally* made them.  You bought the cucumbers, washed the jars, made the brine, let them sit.

Then you casually mentioned to as many people as possible that you were about to, were in the middle of or had just finished making homemade pickles.

After a few weeks you couldn't wait any longer and you cracked open a jar, smelled them (delicious!), stuck your fingers into the pickle brine, chose a big, juicy pickle and took a bite. You can't remember very much of what happened after that because you instantly went into a rare salt coma - the most severe on record since the great Cured Meats and Mixed Nuts convention of '72.

When friends and family come over asking for one of your famous homemade pickles, you're forced to lie to them and say they aren't ready for tasting yet. They need to "steep".  They're immature.  You must give this sort of thing time.

One thing leads to another and before you know it you've told everyone no one can ever try your pickles because you're moving to Japan and you're taking your pickles with you. (Japan is well known around the world for their Fall Fairs pickle competitions and you plan on entering your pickles into all of them on account of the fact you can just tell they're award winning quality.)

Lord only knows what'll happen after you and your pickles move to Japan, I mean, it's a slippery slope. At the very least you'll get involved in the underground Cosplay world.

Instead of going through all the lies and deception you might want to just fix your salty pickles.

In fact this method can be used to cut saltiness in anything that can be soaked in water.

Get a notepad and pencil ready ('cause Laura Ingalls kicks it old school) and take these notes.

How to Fix Salty Pickles

1, Take pickles soak them in water.

That's it.  That's all there is to fixing pickles that are too salty.  So.  Now what are we going to talk about?

I guess I could give you a bit more direction but really there's not much left to say.

The science behind it is osmosis which you may remember for high school science.  You put the salty pickles into unsalty water and the salt is drawn out of them.

If you made homemade pickles that are two salty those are your options.  Soak them in plain water - or rent yourself a Hello Kitty costume and buy a plane ticket.