How to Grow Sweet Potatoes
Your Slip is Showing!

I have to preface this post by saying I have not, ever, in my life … grown a sweet potato.  Have never even thought about doing it actually.

Which, according to the rules of the Internet, makes me the perfect person to tell you how to do it.

I normally don’t show/do/present/teach you things that I haven’t done myself many, many times before.  In fact, it kind of drives me nuts when people say things like  “Such and such does this“. Or “Such and such will remove that stain“.  Really?  Are ya sure?  Have you ever tried such and such?  No?  OH!  I see.  You heard about it on the Internet.  Well.  It must be true then.  Now that you mention it why wouldn’t cat crap remove water marks from a wood table?  I feel so stupid.

So.  As I was saying.  I normally test things out to make sure they absolutely work before I show you them.  (If you’re having trouble with the sweet potato fries, I swear you’re not following the instructions *exactly*)

However, a few days ago I decided I wanted to grow sweet potatoes in my brand new, as of yet unbuilt front yard vegetable garden.   And if you live in a similar climate (Zone 5 – 6) you have a limited number of days left to get your sweet potatoes ready to plant.

So.  I bring to you, hat in hand, a plan to plant sweet potatoes that may … or may not work.  I’m pretty sure it’ll work but I can’t seal it with the old Art of Doing Stuff stamp of approval as of yet.

Who cares though.  WE’RE (probably) GOING TO GROW SWEET POTATOES!!!!!

And here’s how we’re going to do it.

Sweet potatoes grow from something called “slips”.  They’re the green vines that grow out of a sweet potato when it sprouts. 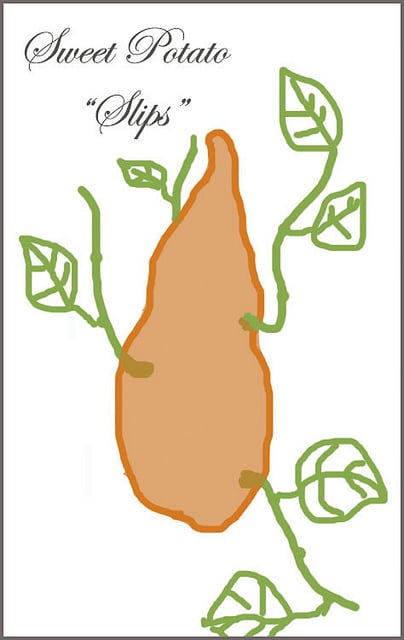 I know what you’re thinking.  You’re thinking.  Wow.  That’s a really great photograph.  But the truth is, it isn’t a photograph.  It’s a picture I drew.  Because, as I may have mentioned, I have never grown a sweet potato before therefore I don’t have a photograph to show you. Chances are you wouldn’t have noticed it was a “drawing”, but I like to be up front at all times.

Once you get your pretty, pretty, sweet potato home … 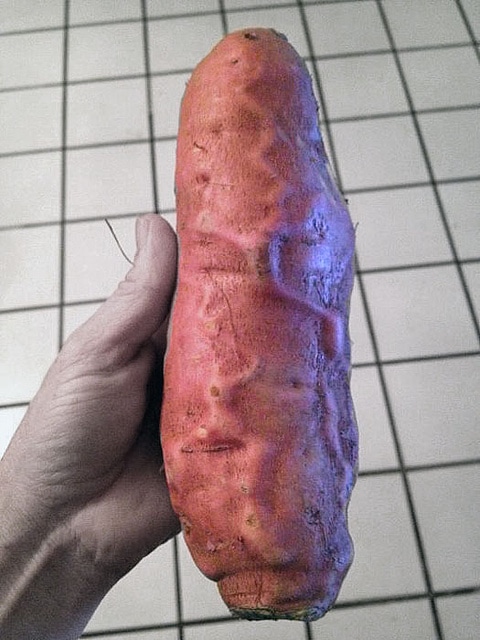 … you set it in a glass of water.  You want the bottom half of the sweet potato in water.  The skinniest half of the potato goes into the water.  A sweet potato is not a tuber like a regular potato, but actually a root.  Who knew?  You can stick some toothpicks around the edge to make sure it doesn’t fall in. Put it in a sunny window and wait. 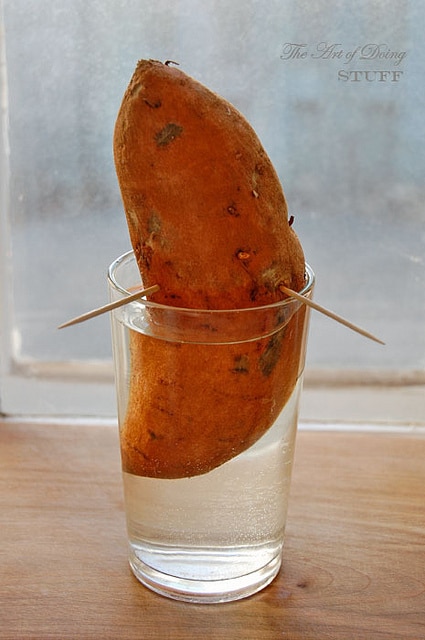 The sweet potato will  begin to grow roots.  In about a month, it will produce “slips”. You want them to be about 20 cm. long.  That’s  perfect for planting.  Each one of these slips will grow 8 – 12 sweet potatoes.  When you’re ready to plant them, you just “slip” the vines off the potato and stick in in the dirt.  More on that later, once my slips actually grow.

I shall continue this saga throughout the coming weeks and keep you updated as to how they’re doing.

Tune in tomorrow for another exciting post.  “How to Perform Dental Surgery! Step by step lessons from someone who’s never done it.  But she’s read about it!”.  On the Internet.