About a week or so ago Betty, (my 82 year old beer drinking, Orange Is The New Black watching mother) called me to ruminate about gum or cats or ISIS or something - I can't really remember.  In the same conversation she told me she needed to borrow my Instant Pot.  There was a recipe in the newspaper she wanted to try but it required an Instant Pot.  The Instant Pot, if you don't know, is the new "miracle " small appliance that has taken the blogging world by storm. I have no idea if it's taken the world of regular home cooks by storm or not, but according to my nephew who works at Canada Post a plethora of them are being shipped to homes across Canada on a daily basis.

The Instant Pot, which looks like a large slow cooker, used to be a 6 in 1 machine, but the new and improved version is a 7 in 1 machine. 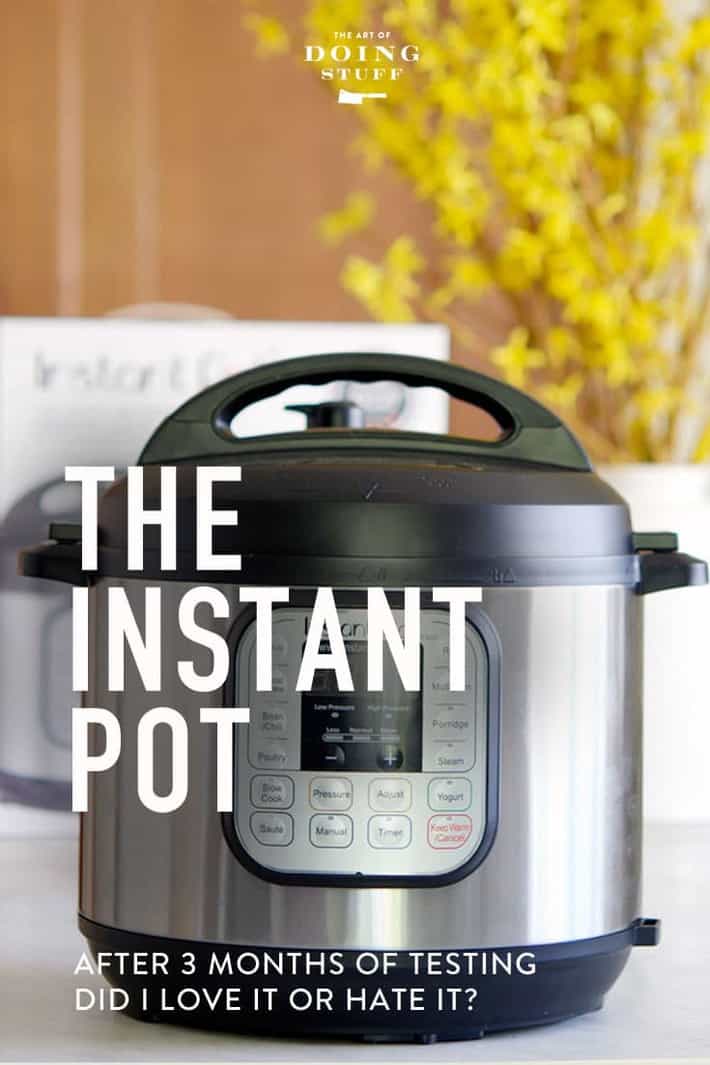 MY REVIEW OF THE INSTANT POT.

WHAT 7 GADGETS DOES THE INSTANT POT REPLACE?

By the way, it's the yogurt maker that they added to the latest edition of the Instant Pot that turned it from a 6 in 1 to a 7 in 1 machine.  And it's a good thing they did because without the addition of that, my review of this thing would have gone from underwhelmed to abysmally underwhelmed.  And guess what?  They now make a 9 in 1 machine!

I'm Karen.  And I'm the only blogger to hate The Instant Pot.  Or so I thought but in truth ...

Nope.  No, I was not the only person to hate The Instant Pot.  I am joined by a long line of people who didn't like the Instant Pot but who aren't quite as vocal about their distain for this thing as the people who are obsessed with it.  The obsessed people who will herein be referred to as The Cult of Instant Pot Lovers Who Maybe Don't Actually Love Cooking so Therefore Love That The Instant Pot Allows You to Lock Your Dinner Up And Out Of Sight Like a Kidnapped Baby.

And, and ... well I'm sure I could find more detractors out there if I could just figure out how to make it into the small kitchen appliance section of the dark web.

But I like cooking.  I like the process of cooking. I like stirring, and tasting and adding salt.  You do not do these things with an Instant Pot.  You put the food in, close it up and hope for the best. Which is my biggest beef with it.  Cooking for me is something to be enjoyed and experienced and food is to be nurtured and tasted throughout the cooking process.  There is none of that with an Instant Pot.

Imagine you're an artist and you have a blank canvas and all your oil paints and brushes in front of you.  You take your time building the perfect painting, adding things and blending them and taking your time lovingly creating it.  That's cooking.

Now imagine you whip off a kind of shitty paint by number in 13 minutes.  That's cooking with an Instant Pot.

I know The Cult is currently looking for ways to poison me with some sort of Instant Pot concoction (that has gooey, rubbery chicken skin in it) but if that's the case I know I have at least 2 hours because even though the Instant Pot Cult claims they can make "Bone Broth" soup in 20 minutes, what they don't mention is you can't.

Why not?  Because of reason #1 I didn't like the Instant Pot.

Over the course of my review I made Cherry Cheesecake, Yogurt, Oatmeal, Chili, Chicken and rice, Hard Boiled eggs and a bunch of other things in my Instant Pot.  Some turned out great, some turned out terrible. Some cooked quicker than normal and some took longer to cook than my regular way of cooking them.

Believe it or not I do have some good things to say about the Instant Pot.  Really I do.  Although I still overwhelmingly hate it for my own cooking needs for the most part, I would say ...

WHY I LIKED THE INSTANT POT

So what about that newspaper recipe my mom wanted to borrow my Instant Pot for?  After explaining the Syrian conflict in a nutshell to her and asking her if she had any white thread, I asked her to read me the recipe over the phone.  Turns out the recipe said you needed an Instant Pot but ... you didn't.  Not even a little bit.  In fact, they were just using it to cook the chicken for a stir fry which would be 10 gazillion times faster to just cook in a pan.

And therein lies my true distain for The Instant Pot and it's gurgling cult of followers. They want you to think you can and should cook EVERYTHING in the Instant Pot.  Just because you *can* do something doesn't mean you should.

I'll fully admit that I kind of had my back up about this whole Instant Pot craze right from the beginning but I truly kept an open mind throughout my review.

I do not recommend the Instant Pot to anyone who enjoys the art of cooking.

I don't even recommend it to people who want to be able to make cooking easier. It doesn't really do that.

It's not like The Instant Pot chops and measures out your ingredients for you.  If you're looking for something to make cooking easier, I'd recommend Blue Apron or another food delivery service that pre-portions meals and ingredients and delivers them to your door before I recommended an Instant Pot.  Yes, I've worked with Blue Apron before on posts and  no they aren't paying me to mention them in this post.  It just truly makes more sense to me.

If you don't by all means ... buy an Instant Pot this instant.