Create a Thanksgiving centrepiece by using what is traditionally associated with Thanksgiving - the harvest.  Beets, apples, tomatoes and red cabbage make this modern take on a cornucopia a stunning focal point for the centre of your Thanksgiving table. 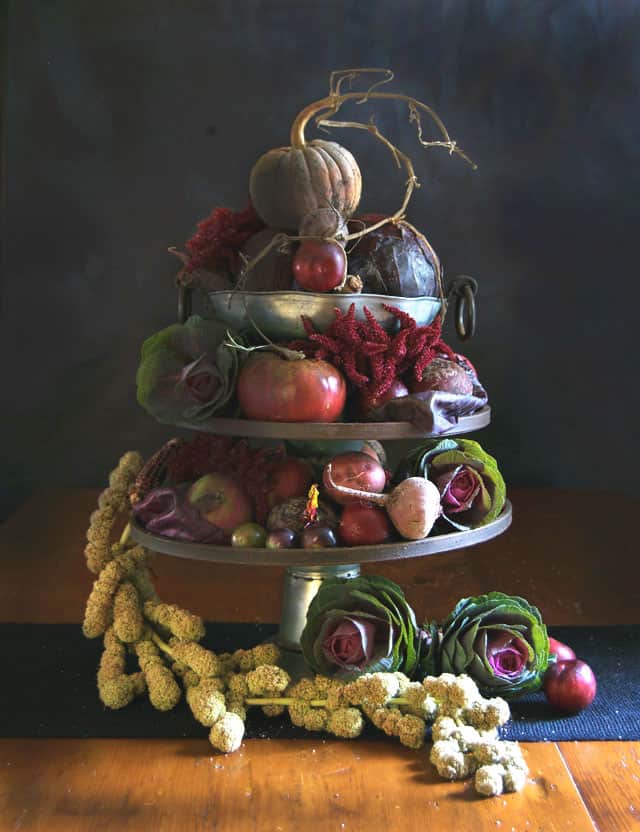 It's beautiful.  It's shockingly beautiful.  It is made entirely out of produce.   If grocery stores displayed their food like this it would be a disaster.  People would come in and faint at the beauty before they even bought any groceries. Although smelling salt sales would go up.  If the year was 1872.

Anyone can do a vegetable arrangement for the centre of their table, you don't have to garden or have 3 matching zinc pedestals ... you could do it on a platter.  Or a bowl.  Or basket.  You get the idea, because you're quick like that.  I will have a few tips for you in a minute though that are important to the success of your faint-worthy vegetable centrepiece. 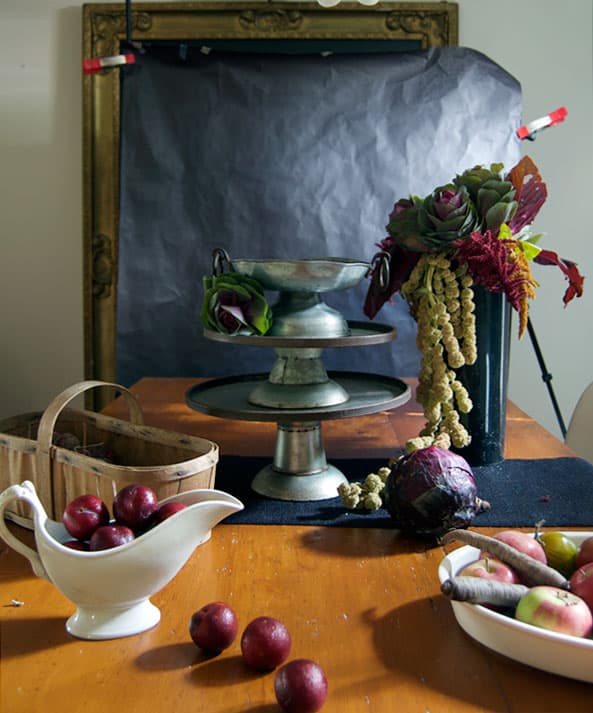 I actually bought these 3 zinc pedestals at a local kitchen store, but they're a popular item that a LOT of independently owned kitchen stores carry across North America.    I found you something similar on Amazon, a 3 tiered galvanized cupcake stand, that would work great and costs less than my 3 stands totalled.

Don't do shiny.  Whatever you use as your stand or vessel should be dull looking.  When you think vegetable harvest and Thanksgiving you don't think sparkle and crystal and glittery.  You think rustic and tarnished and worn.  The vegetable harvest at the end of the year is a lot of hard, dirty work and that's kind of what your centrepiece should look like.  Not hard and dirty like a lady of the evening.  Hard and dirty like an old rusted combine.

When I first decided to do something of a modern day cornucopia for my Thanksgiving table this year I was convinced I was going to do it out of tomato leaves.  A big, long, runner of tomatoes leaves with sage and rosemary and all the herbs used in stuffing.  When you ran your hands over it it would SMELL LIKE THANKSGIVING DINNER!!!  A few vegetables here and there and it would be complete. It would most definitely make people gasp.  So I did a practice run with tomatoes leaves and herbs from my garden and people DID gasp.   Pink Tool Belt specifically.  We both inhaled sharply at the sheer hideousness of it.  It was.  Wrong.

So I rethought my plan and came up with the idea of doing a 3 tiered arrangement of all vegetables on a cake stands. 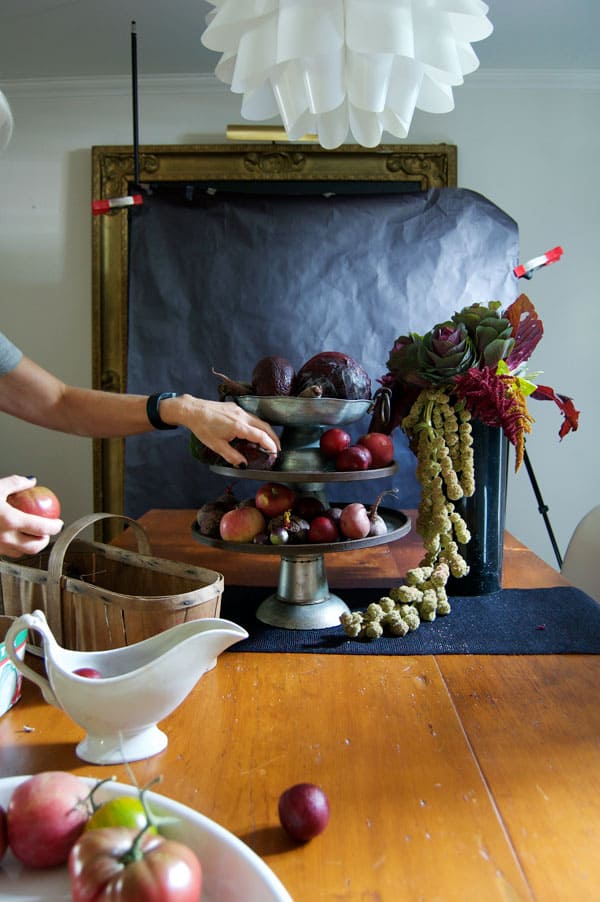 My first run at it produced something not quite as hideous as the great tomato leaf runner, but not the eyeball popping extravaganza of beauty I'd envisioned either.

At this point I was really beginning to question my future in the highly competitive world of vegetable floral design.

The first time I tried this I used all of the different vegetables from my garden.  Yellow Potatoes, leeks, orange carrots, bright red tomatoes, jalapeño peppers ...  The result was something that would never make anyone, save for the most delicate of creatures, faint.  Which brings me to Tip #2.

Go monochromatic.  And DARK.  The dark red, Burgundy, green and purple in the final version of my Thanksgiving centrepiece are what make it work.  It all blends and has the same tones throughout.   The dark colours give it a moodiness you just can't get with lighter colours or a lot of different colours. 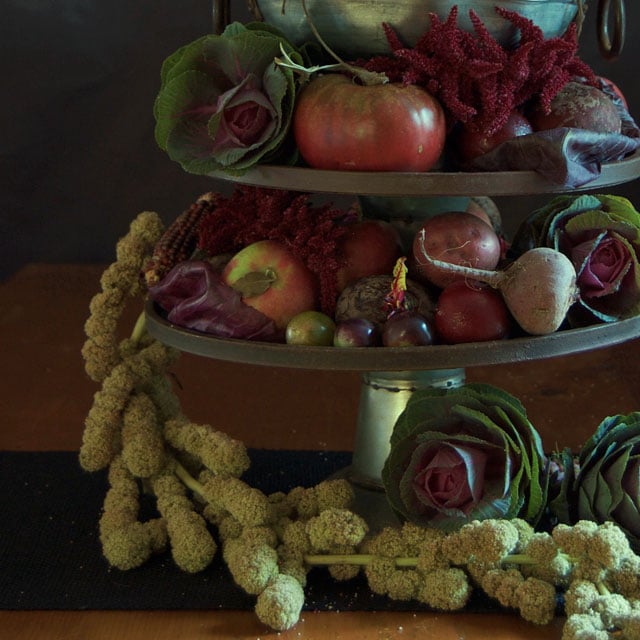 It looks perfectly great without any flowers, but I wanted to add something flowery to it for one main reason.  Movement.  When you have trailing or winding flowers it brings the arrangement to life because it gives it the illusion of movement.  Not like it's going to walk away but like it's windblown.

And guess what?  Those flowers are actually food as well.  Amaranth. It's a grain.

And that's really all you need to know to make pretty much anyone faint at the sight of your Thanksgiving centrepiece this year.  Of course the best part about it is there's no waste. Not of money or materials.  You're decorating with food that, once Thanksgiving is over, you can eat.  And if you want to store the beets and carrots you used in your arrangement do it like this.

To take some of the guesswork out of it for you while out picking vegetables or rolling around the grocery store here's a list of all the produce I used.

Plums - Again, got them on sale and they're a great colour

Happy Thanksgiving to all my Canadian readers.  Enjoy your roast turkeys, stuffing, gravy laden mashed potatoes and sweet, delicious pumpkin pie topped with dollops of luscious whipped cream this weekend.  And to my American readers ... sucks to be you.