The Mystery Keeper Tomato.
A tomato that stores for months. 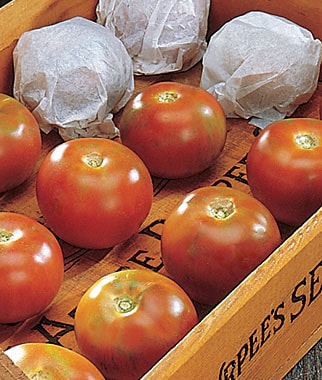 It doesn’t matter where you live in North America, this has been the longest, hardest winter in memory. We’ve become familiar with new words and phrases like Polar Vortex, Frostquake and holy shit. That last one is reserved for when you open your hydro or gas bill.

It’s the winter that keeps on giving, so it’s hard to believe that in a couple of short weeks, gardeners are supposed to start their seeds.

But it’s true. And much like the cast of the Jersey Shore, this winter horror will soon be forgotten.

If haven’t noticed yet my Seed Starting Calculator is back up on my sidebar so you can calculate when to start any seed you want to and when you can plant it out. All you have to do is punch in your first frost free date and it will calculate it all for you.

If you’ve never grown your own tomatoes before, you should really try it. A big tomato plant blends into almost any landscape, so even if you don’t have a vegetable garden, you can still have fresh tomatoes all summer.

And I have even better news.

You can ALSO have fresh tomatoes all winter. But you have to start right now.

Most of you will never have heard of Storage Tomatoes. Storage tomatoes are tomatoes that slowly ripen once picked. They are bred specifically to pick at the end of fall and keep for months. That’s why they’re also referred to as “Keeper” tomatoes.

Whatever you call them, they’ll stop you from having to buy grocery store tomatoes throughout November, December and January. Linda, from Tree & Twig has even had keeper tomatoes that lasted her until Easter. Easter!! 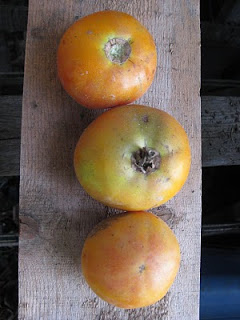 They aren’t the prettiest tomatoes you’ll ever see, but that’s because they have a bit of a quirk.  They ripen from the inside out.

The type Linda grows and the type I’m going to try this year are called “Mystery Keepers”. I got them online from Mapple Farm a specialty seed producer in New Brunswick, Canada.  The interesting thing about these tomatoes is, as I said, they ripen from the inside out.  So while the outside might look sort of pale yellow/orange, the inside will be red.  You test for whether they’re ripe by how they feel.

You pick them at the end of fall, before the first frost, and just keep them on the kitchen counter.  No special storage is needed.  Of course you can keep them in the basement, bedroom or your bum, but the kitchen is probably your best bet. If only for the sheer convenience.

Some of the tomatoes may be further along in their ripening than others when you pick them, but that’s good because that means they’ll ripen inside the house at different times.  So you’ll have late fall tomatoes, Thanksgiving tomatoes,  Christmas tomatoes and possibly Easter tomatoes.  Unless you’re Jewish.  In which case, Mazel Tov!, you have Passover tomatoes!

For those of you in the United States, Burpee has their own version called Long Keeper you can order online.

So if you’re ready to kick winter in the snowbank, get yourself some seeds, stick them in some soilless mix, water, and put them on a sunny windowsill.

If you’d like to learn more about starting a whole bunch of seeds read my post on How to Grow Your Own Vegetables from Seed.  It’s a quick and easy guide to the basics of seed starting.

Which as I mentioned earlier starts in just a couple of weeks.   Or … right now. 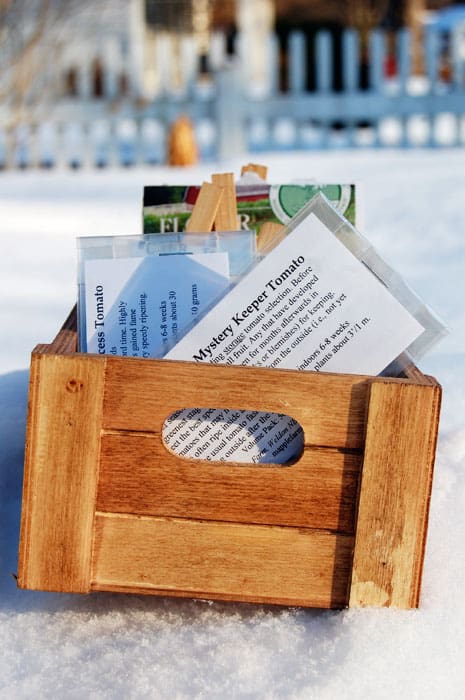 (please don’t plant a box and expect it to grow tomatoes.  Obviously this won’t work.  All you’ll grow is boxwood. Duh.)