I'm a member of a garden club.

No seriously.  I really am!  Why aren't you gasping?

Hold on.  It just occurred to me that you probably think it's perfectly normal that I belong to some sort of garden club.  That it makes perfect sense.  It does not.  As much as I love gardening (and always have) I'm not a "club" kind of person.  I shun clubs.  I'm a club shunner.  I'm more of a Lone Wolf kindda girl, wandering the plains alone with the soundtrack from The Good, The Bad & the Ugly playing in the background.

But last year I became a club person when I joined a local community garden.  I needed room for my paste tomatoes and one of their members kindly agreed to share his plot with me.  Since then I've secured my own plot in the community garden and am thusly a member of the garden club.

Like most clubs, they have fundraisers.  I suggested drag racing, but they were worried about noise and pollution and accidents and such. Why they would think a bunch of drag queens would pollute the neighbourhood is beyond me but I'm new to the group so I didn't question them. And I had to agree a bunch of screaming queens in a foot race would undoubtedly be noisy.  And lead to accidents.

So the club decided to go with the more conventional if somewhat less entertaining, "Plant Sale".  I gave away a few of my tomato plants last year and people seemed to like them so I was assigned to tomatoes.

I planted 10 different varieties of tomatoes around the end of March and they're now getting properly upset about being inside.   I planted them all in a single, large plastic bin.  I had no intentions of leaving them in the bin so long, but life got in the way.  They're tomatoes.  They can take it.  Tomatoes are incredibly resilient but I had literally run out of room for them like this.  The plants were actually touching the fluorescent lights I grow them under.

As you can see they're 15" high already. For everyone who speaks in centimetres, that's about as high as a drag queen's running heel. 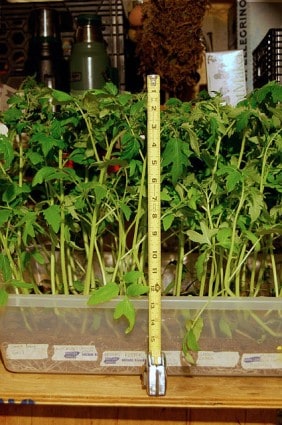 Their roots weren't really getting the best chance at developing what with being smashed into the plastic box. 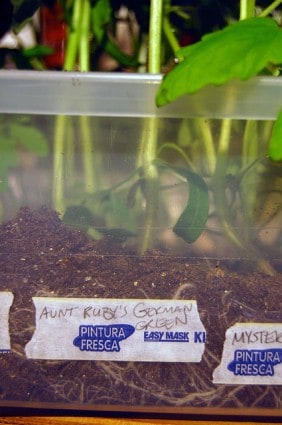 But that's one of the many great things about tomato plants. When you're replanting them, whether into new pots or into the ground, you can plant those suckers right up to their top set of leaves if you want. The plant will start to sprout out roots from its stem. Just make sure you pull off the bottom leaves before submerging the stem in soil so the leaves don't rot in the dirt. 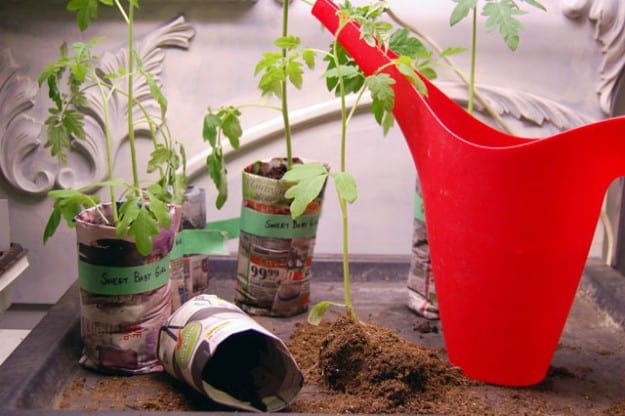 So when it comes time for you to plant your seedlings plant them as deep as possible to get a stronger plant with more roots. More roots means more nutrients and guck getting into the plant. Guck is good by the way. It's my own technical term for the good stuff in compost. Plus worm poo and such.

If you're looking for a bushier, wider type of plant, you can pinch off the top of your tomato plant which will encourage side shoots. 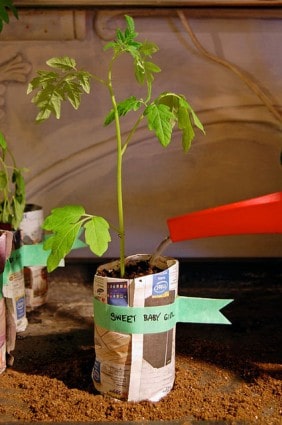 For the plant sale I made 70 newspaper pots from a wine bottle and grocery store fliers, then labelled every pot with the variety of tomato inside. By the time the sale comes around each of plants should have developed a tight root system and be ready for outdoor planting.

These are the tomatoes I grew. It's probably a bit too late for you to to start these now (but not impossible) but if you're interested in finding any of these tomatoes to grow yourself, keep your eyes peeled for plant sales in your area. I know Linda Crago has an annual tomato sale every spring and many other tomato enthusiasts have sales too.

Before taking these seedlings to the sale I'll have to spend a week or so hardening off the tomato plants. If you're new to growing tomato seedlings this year, take a look at how to  harden something off  and why you need to do it.

If you're a drag queen, you should probably do the same.