Have you heard of the One Room Challenge??  It's the decorating sensation that's swept the Internet. Various design bloggers are chosen to make over one room in their house in a short amount of time with access to beautiful sponsored products.  It's a huge deal.  Well guess what?!  My basement makeover is nothing like that. 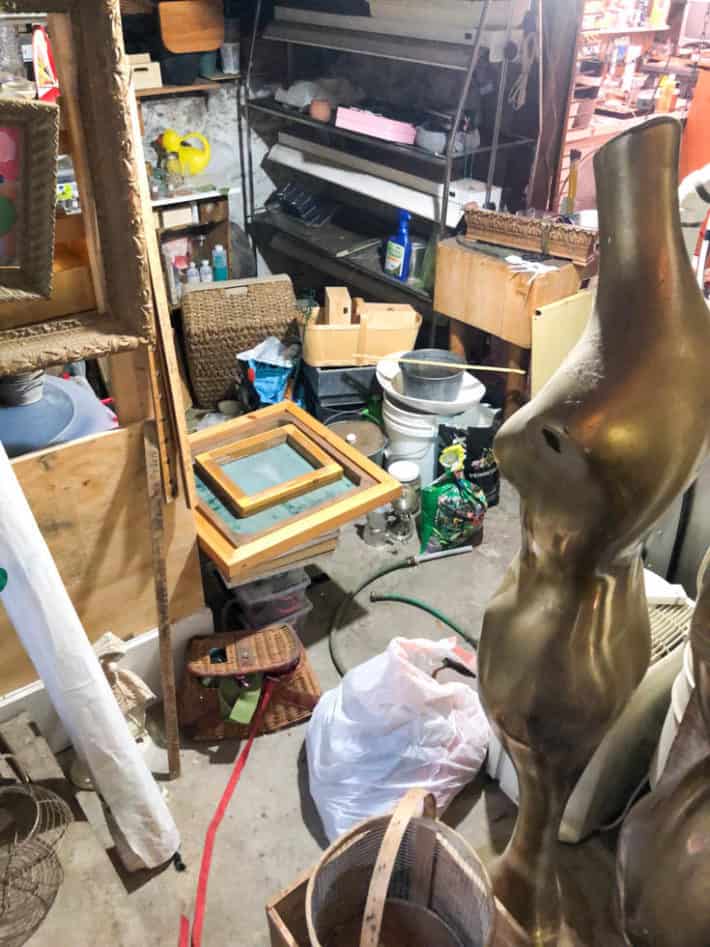 I'm sure you understand now.

Everything got pulled out, moved, screamed at and kicked until there was no coming back from it. So I went upstairs, made my dinner and pretended none of the previous hour had happened.

If a news crew showed up the neighbours would say, "No, nothing unusual, she mainly keeps to herself. I did see her fling a 6' tall gold sex doll out of her front door the other night. That seemed a bit odd."

They aren't sex dolls by the way. They're life sized gold mannequins which I use exactly once a year when I drag them up from the basement to put them on either side of my living room entrance on Oscar night. 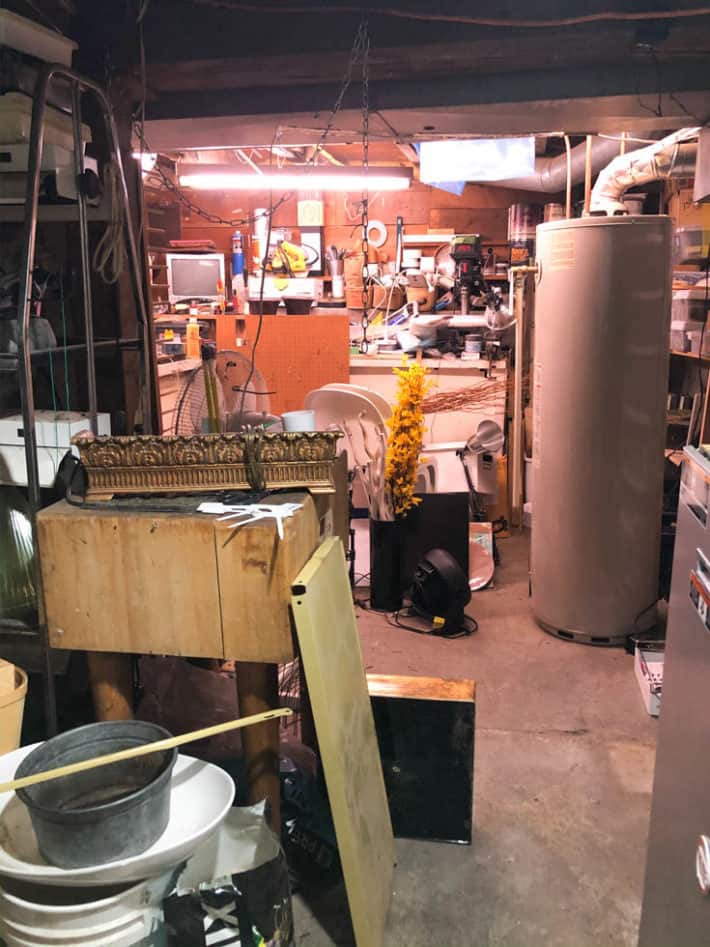 Every night for the past couple of weeks I've been going into my Alcatraz of a basement to sort things out. Anything I don't think is worth the space it takes up is brought up to the dining room. Which is now looking similar to my basement, yet somehow my basement doesn't look any better. 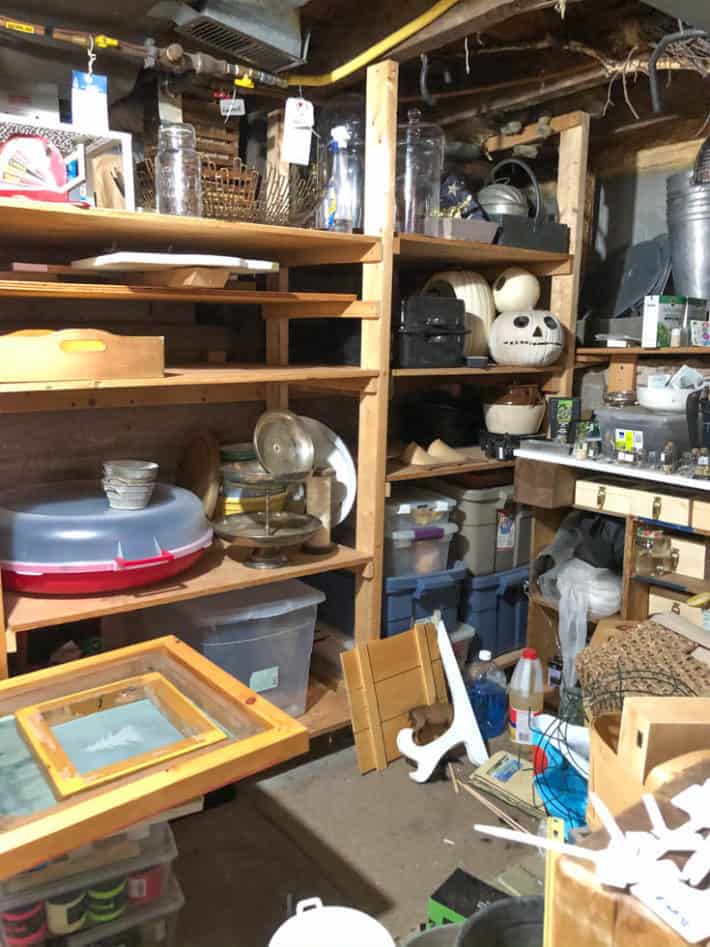 I put stuff away in the basement then a day later I'm moving it again, realizing there's a MUCH better spot for it just over here behind the 14 tubs of Halloween decorations.

This just goes on and on. 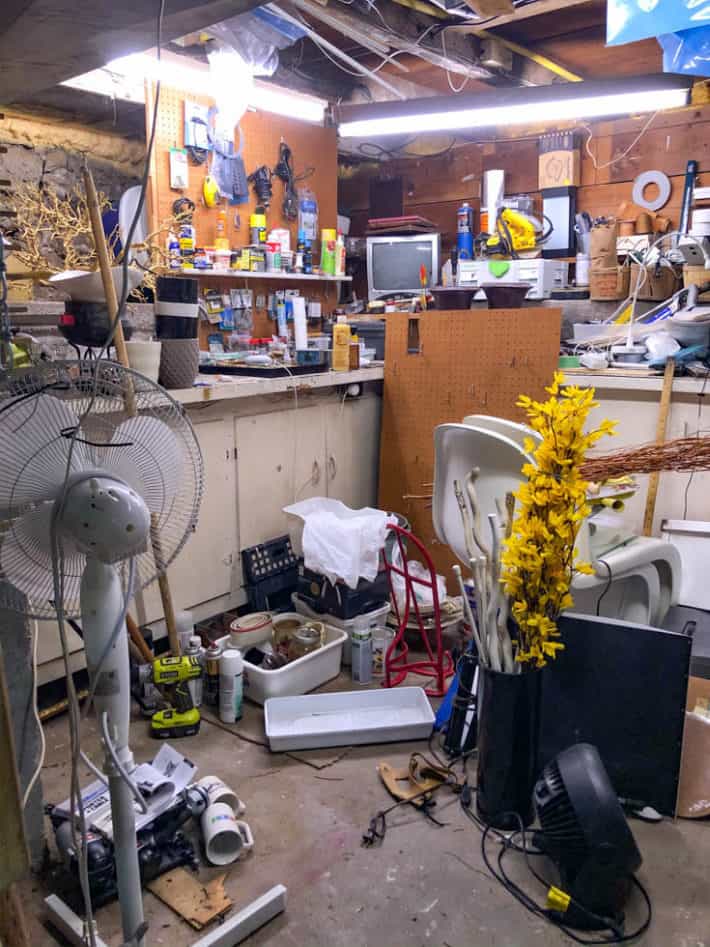 The whole project just about went sideways on me when I realized I didn't want to do this anymore. It's not horrible to undertake a project that you can see is progressing nicely. Or just progressing. My basement on the other hand just kept getting worse and worse.

But I think last night I may have reached the peak of the shit storm and am now coming out on the other side. 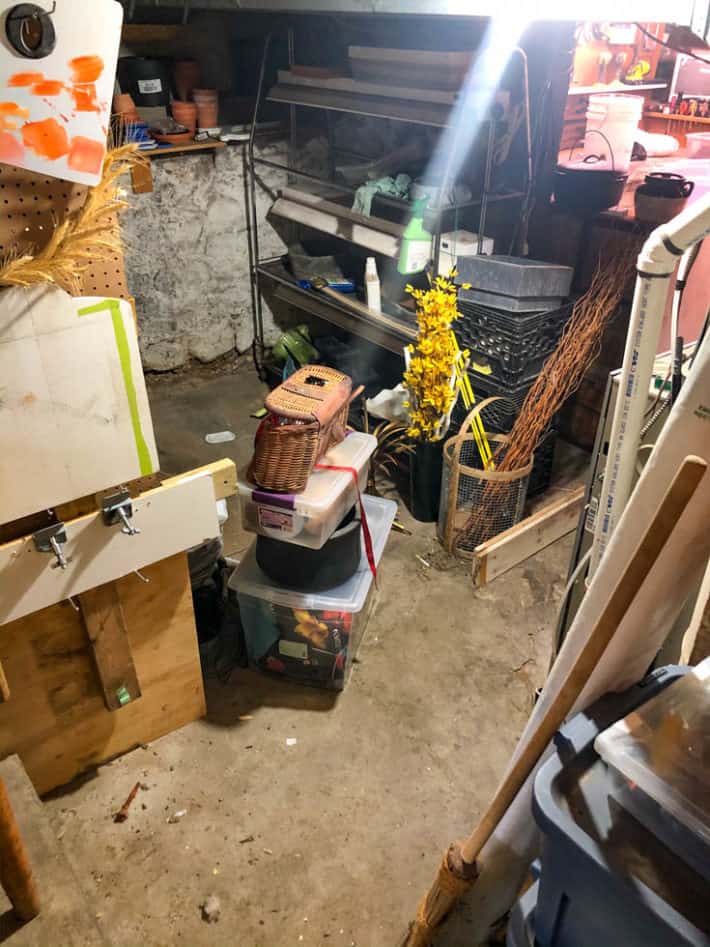 Still covered in shit you understand, but at least the storm is tracking north.

My workbench on the other hand looks GREAT. 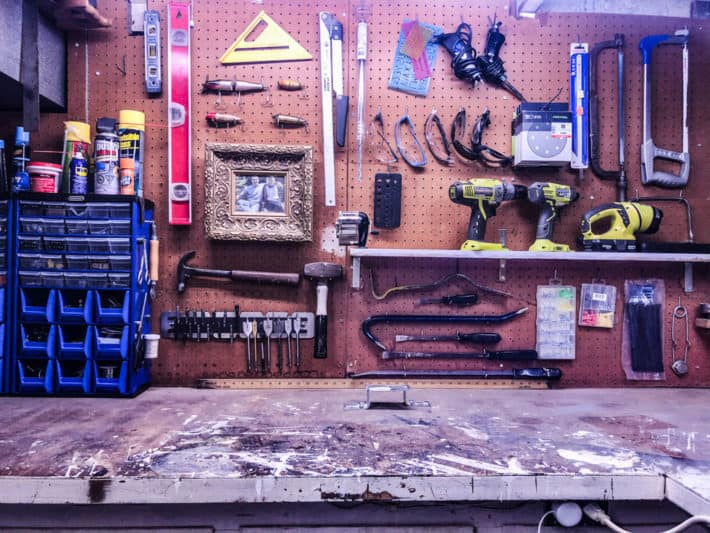 Everything is organized on the pegboard with 2 new parts drawers lined up side by side. Everything is within easy reach.  That was 24 hours ago. 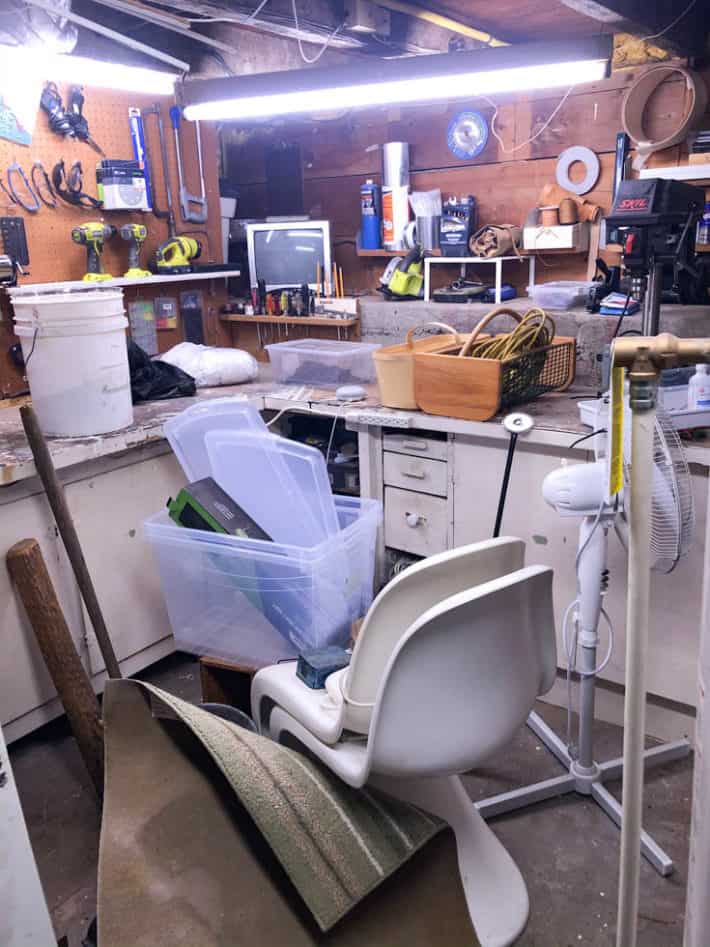 This is it now. You see, I started to clean up the other side of the basement which led to this. I told you. One step forward, two steps back into a tourists-only Mexican Porta Potty.

I should have just thrown out the mason jar. We all know that would have been the most mental health friendly thing to do.

All I want is a basement that holds my very large supply of hobby materials and tools. And I want to be able to access them and put them away without the fear of someone finding me a month later surrounded by an avalanche of plastic pots and sex dolls. I mean mannequins.

Nope. It's not going to be beautiful or inspire you to Pin it or even want to copy it. In fact if you're especially sensitive to messy spaces it'll probably still require you take a pill and have a rest after looking at it. The walls are rubble, the floors are cement and the ceiling is made up of 10% wood, 10% hazardous looking electrical wires and 80% dead bugs. That's not going to change.

How to Trim and Cut a Roast into Steaks

I buy most of my meat from either my farmer friend Murray (Murray's Butcher Shoppe) or my local feed store because the owners have cattle. But once in a while if I'm at Costco I'll buy one of their tenderloin roasts and cut it into steaks at home.

Either way buying a whole roast (whether it's a strip loin, tenderloin or whatever .. it's a much cheaper way to eat steak than buying individual steaks. 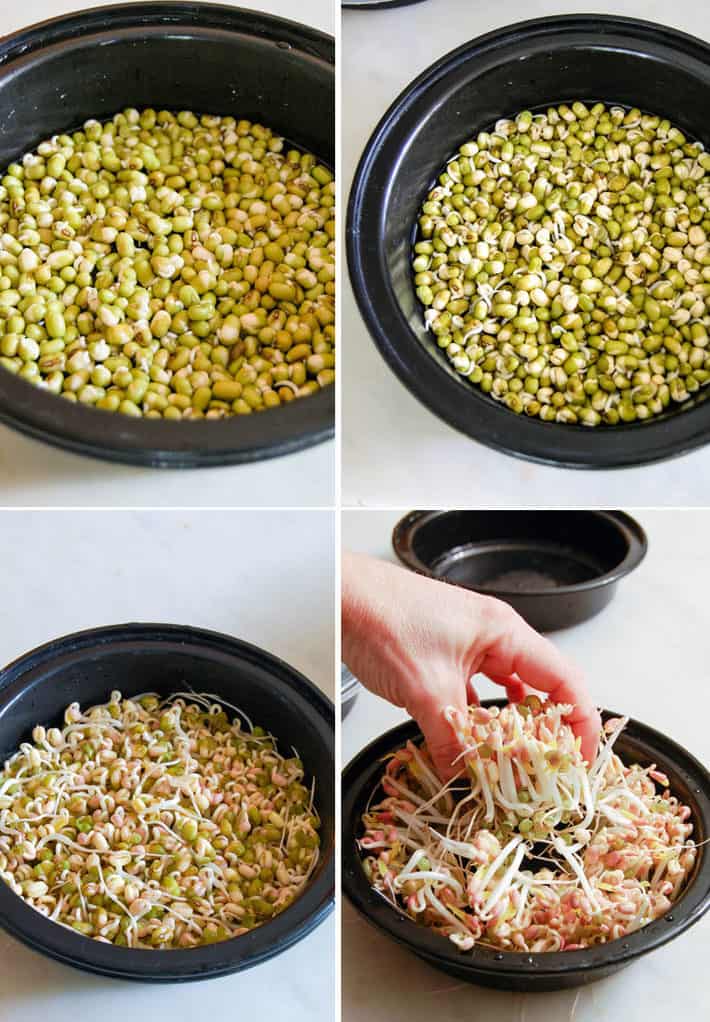 How to Grow Bean Sprouts.

If you missed it earlier this week, I've been growing mung bean sprouts. Last week I used them to make a quick dinner with rice, marinated tofu, sprouts and my homemade spicy peanut sauce.

If you have a store bought peanut sauce you like just use that! 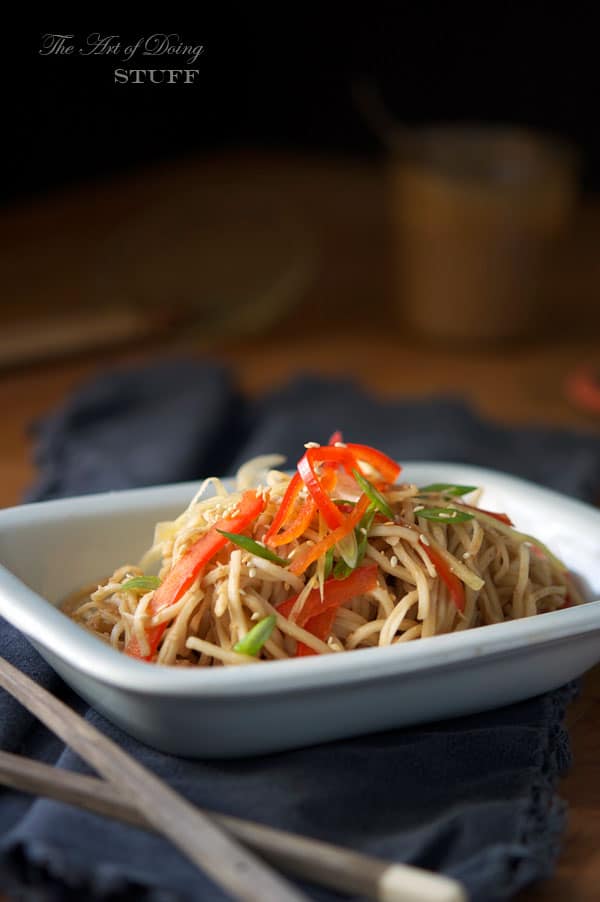 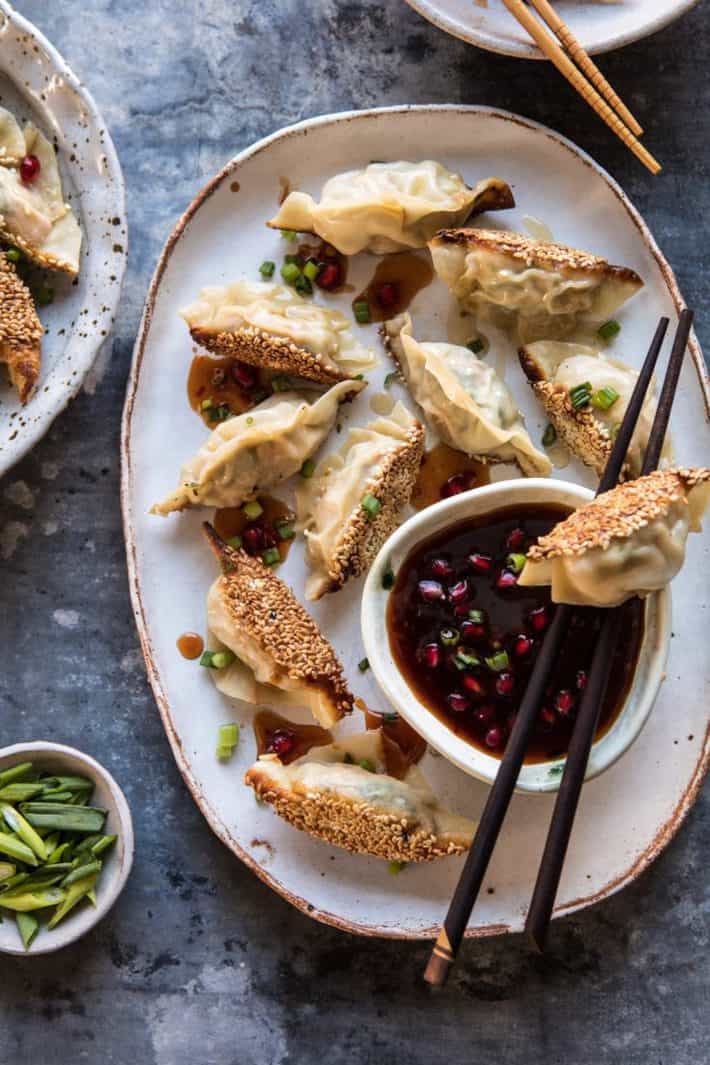 I make a batch of these every few months and then just stick them in the freezer. To cook them you just fry them in a pan for a few minutes then steam them. Easy delicious dinner. 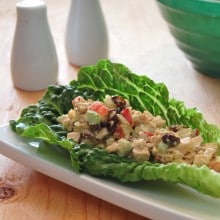 I FOUND AN APPLE IN MY CRISPER! Not just any apple, an apple from my tree. I thought I'd eaten all of my apples, but no. So I'm going to make an easy curried chicken salad with it this week. The jury is still out on whether I'll eat it on a lettuce leaf or two huge toasted hunks of bread, golden brown and dripping with butter. Actually - the jury has reached a verdict.

I hope the rest of your weekend is good. It's Sunday! Stay in your pajamas, make a roast and then come on over and help me clean out my basement.