This week?  What did I do this week?  I went to the mall.  So now you know you're in for a horror story. But the day didn't start out that way.  ALSO read on to find out how to win a copy of Floret's new book A Year in Flowers! 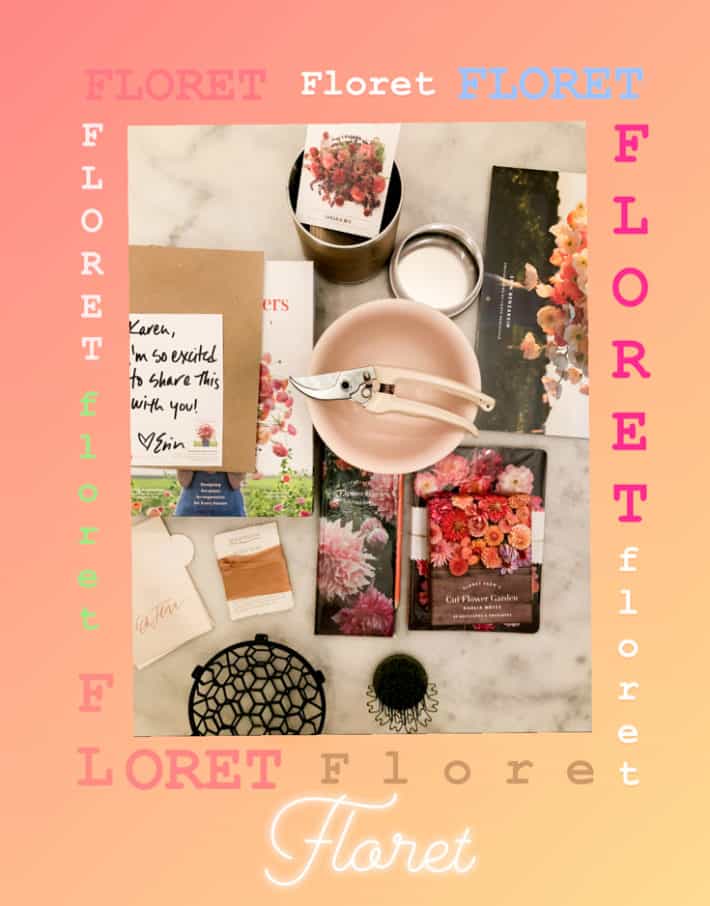 The day began with gleeful anticipation. This was the day I knew I was going to get the sought after "Influencer Box" from Erin Benzakein from Floret Flowers. I'd checked the tracking number at 9 a.m. and it showed those 3 little words everyone longs to hear around Valentine's Day - "Out for Delivery".

Mainly I floated around the house, very near the front door, waiting for the package,  but after a couple hours of doing that I got hungry on account of the fact that floating is very strenuous in real life, as opposed to in a dream.

I decided to expunge some nervous energy by calling my mother. You may know her as Betty. I told Betty I was thinking of going to the Apple store to pick up a new Apple Watch since mine is  ...... AND JUST LIKE THAT Betty was at my doorstep, spinning in circles ready to go to the mall.

I went to retrieve my car keys, leaving my mom vibrating in my foyer like a dog who knows they're going to an off the leash park.

That's when the horror show began. Well, in truth I guess it began when the first person came up with the idea of a mall. 🙄

Betty has the patience of a gnat on uppers when it comes to going places and having fun. She hears the world "mall" and that's it, YOU ARE GOING TO THE MALL IMMEDIATELY.  Try as she might, there was just no way she could keep quiet and let me open my influencer box in peace. As she videoed, I got "'C'mon Karen, let's go."  followed by "We have to get to the mall", "HURRY UP KAREN" and a "THEY'RE GOING TO BE CLOSED SOON"  thrown in for good measure.  This was at 1 o'clock in the afternoon.

I sighed, closed up the box I had just opened and said, no. Not like this. I'll open this when we get back.

Cue Betty spinning in circles again as we headed out the door to ... the mall.

That's the end of the story. You were probably anticipating that something awful happened at the mall weren't you? It did. It was the mall. AND I WAS IN IT.

Of course awful things happened there. The lighting was terrible, the music annoying, AND IT WAS A MALL.

To see the video of the whole debacle go to my Instagram page and click on the "Floret Box" highlight. Or just click here. There's a fun surprise for all of you at the end of it.

O.K. I'll just tell you what the surprise is.

In last week's post I told you about going to Seedy Saturday where I intended to buy zero seeds and instead bought many, many seeds.  Betty spins for malls - I spin for seeds.

I didn't get a chance to show you what I got last week so here's a look at my seed purchases with a bit of a description about them all. 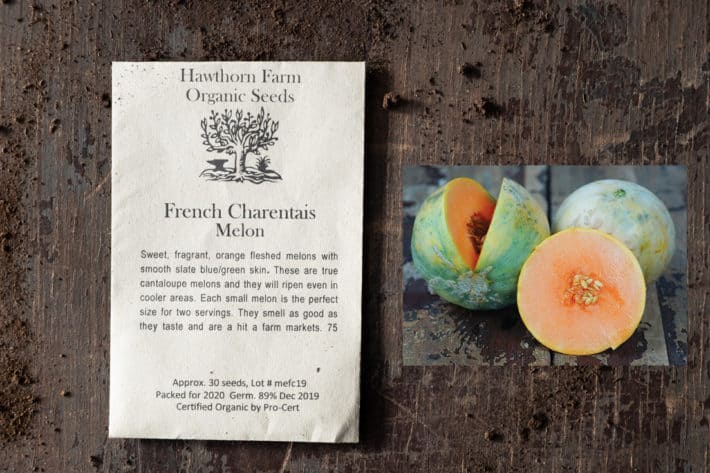 The Charentais Melon is one I've wanted to grow for a few years but never came across the seed. It's a famous rareish melon from France that apparently has a sweet, aromatic, indescribable umami about it.  I was powerless to say no. I had to buy it. It was on my celebrity cheat list. 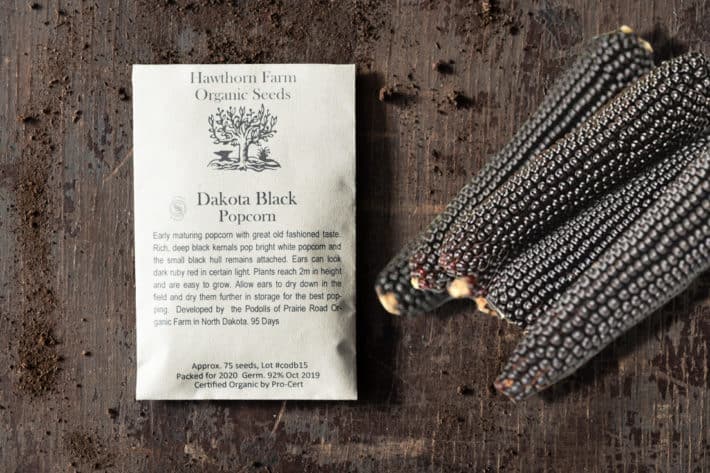 Dakota Black Popcorn was not on my cheat list. But I have noticed it over the years and rumour has it, it's a very good variety of popcorn. Plus you know, it's BLACK. Again. Basically powerless. Now I'm going to have to figure out a way to keep the 3 different varieties of corn I'm growing this year to not cross pollinate. I'm also growing Glass Gem again for the first time in a few years and my favourite (so far) variety of sweet corn, Serendipity. 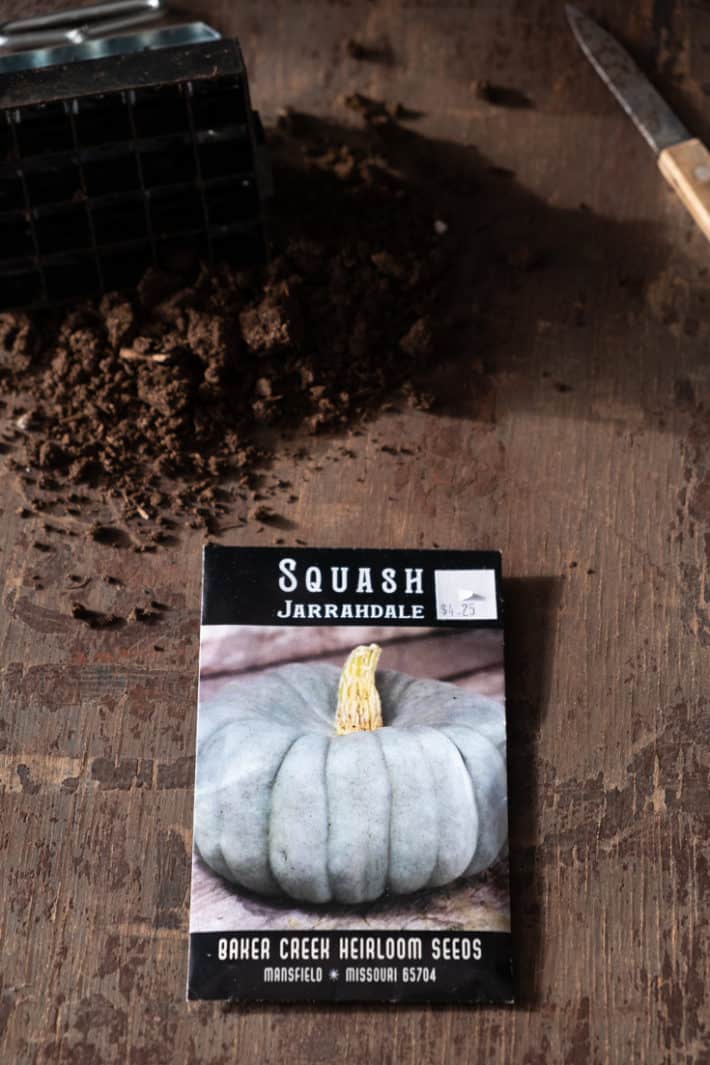 I've grown Jarrahdale squash for the past couple of years. I really like it. It's sweet, not watery and stores fairly well. I have seeds left from a 3 year old packet from Baker Creek but figured they were getting less viable now so I should buy a new packet.

That's a total lie. I was so excited by these seeds that I completely forgot I already own a packet of them. If seeds are 3 years old, in most cases they're perfectly growable. You might get a slightly lower germination rate is all. (unless it's lettuce - for me anyway, lettuce seed is only viable for a year) 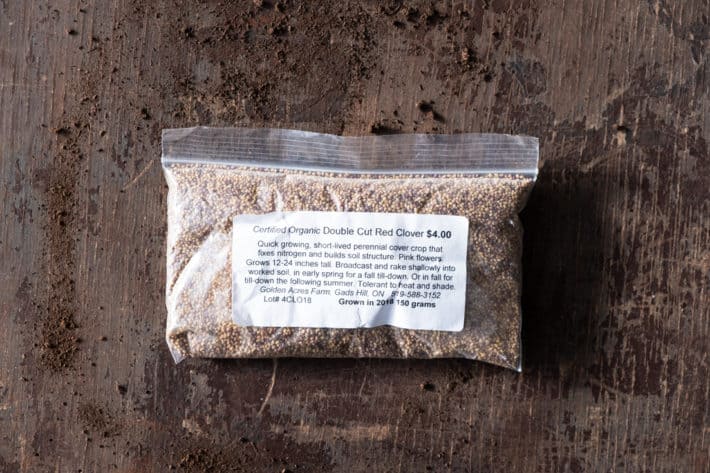 Double Cut Red Clover will be a cover crop for me in a couple of beds this year. You just throw it down, let it grow and then either dig it into the soil or just chop it off at soil level. I chop off at soil level because I don't dig my soil.  Doing it this way also  means you don't have to wait a few weeks after digging in the greens to plant. 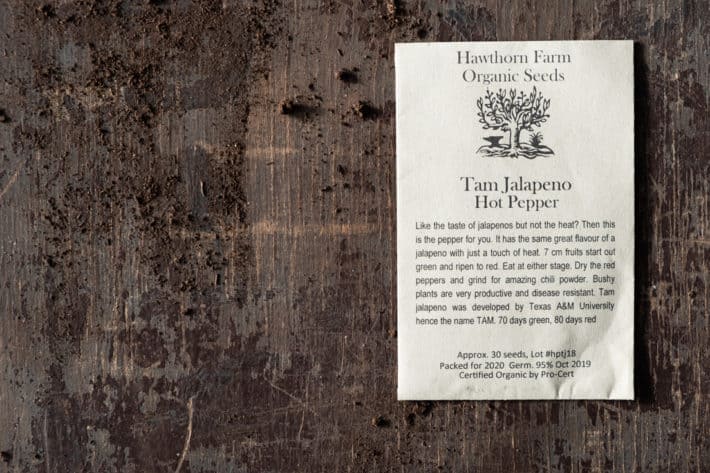 This is the purchase that demonstrates both my optimism and stupidity. I grew Tam Jalapenos last year. They're supposed to be a milder jalapeno pepper.  I like very hot jalapenos for most things, but for my jalapeno poppers where you're eating an entire jalapeno I don't want it so hot that you can't eat more than one of them.

So as I said I grew this variety last year. They were blindingly hot. There were in NO way milder than a regular jalapeno and in fact, I believe they were much hotter.

I saw these seeds just over the top of my rose coloured glasses and snatched them up convinced that THIS would be the year the mild jalapenos actually tasted mild. 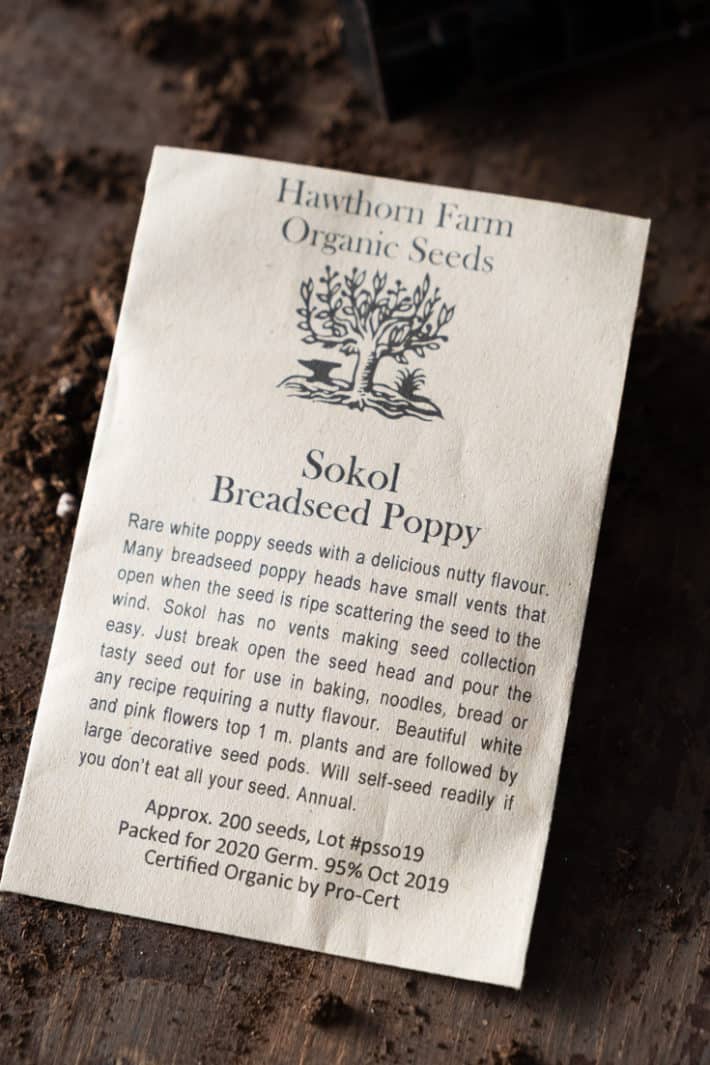 I meant to grow poppies with edible poppy seeds last  year but became overwhelmed with all my poppy planting. I saw these rare white poppy seeds at the sale and had to buy them. Yes.  You heard me. HAD TO BUY THEM. If you're looking for poppies with edible poppyseeds look for ones that are labelled breadseed poppies or are of the "Papaver somniferum" variety. All of those have seeds meant for eating. 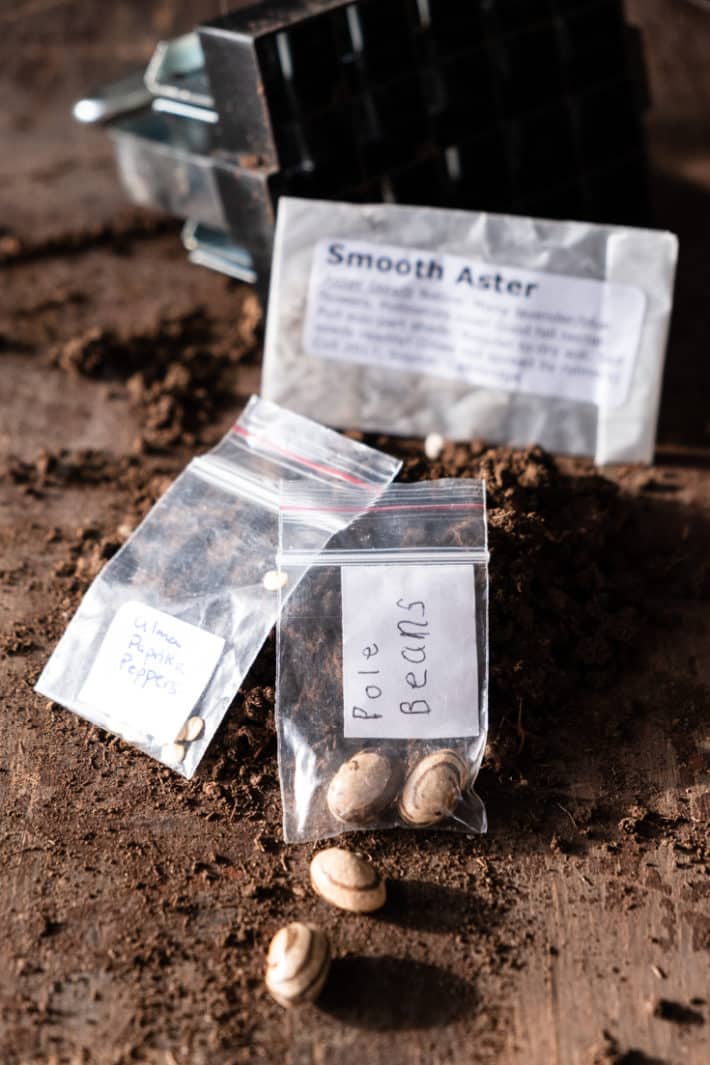 Part of the fun of Seedy Saturday is running in like a lunatic and heading to the seed exchange table. That's where you can drop off any seeds you have to share and pick up ones that someone else has shared. I dropped off a bunch of things like Glass Gem Corn, and a bunch of different rare bean seeds.

This Seedy Saturday was a bit lower key than others so a lot of the packets that people put down were labelled "beans".  Or "lettuce".  No variety or strain, just the basic vegetable it was.  I  managed to find what I think are rare Eye of the Goat beans (Ojo de Cabra) and a packet of Alma Paprika peppers. 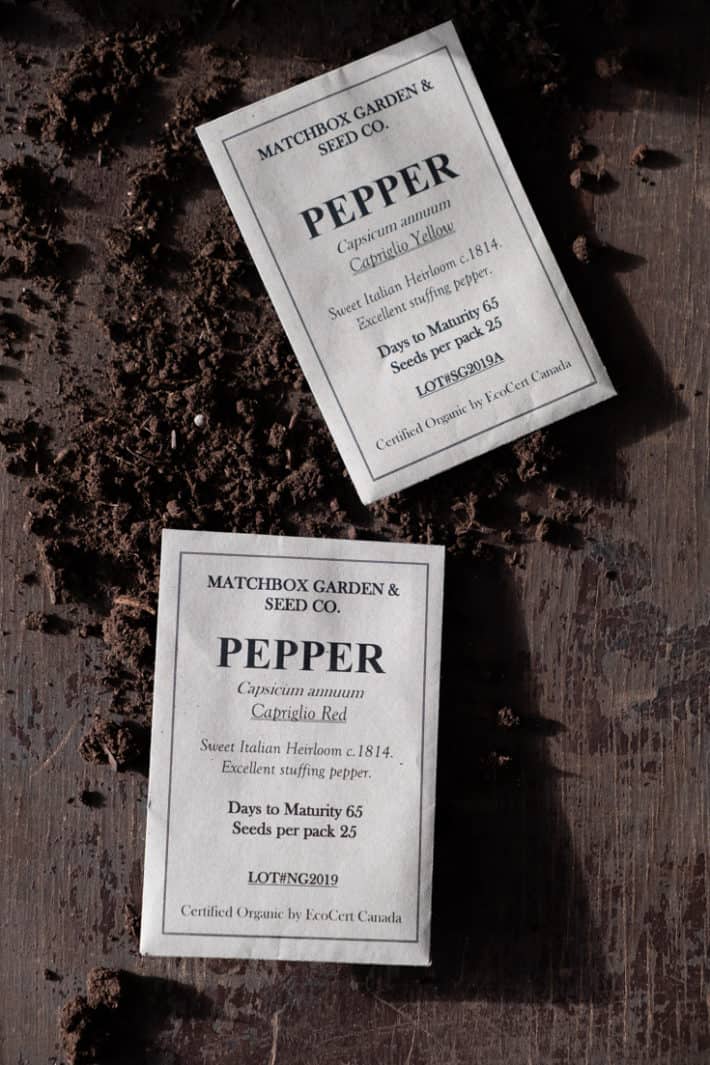 Now these.  The special seeds.  Have you ever gone to a restaurant and told the waiter to just bring whatever the chef recommends?  I have. It's fun.  I mean, you have to assume that no one knows better about what to eat in the restaurant than the chef, right?

That's true for seed sellers. I talked for quite a while with Hanna, the owner of Matchbox Garden & Seed Company.  She is a seed enthusiast, to say the least, who has grown her love of food (she's a chef) and growing vegetables into a successful multifaceted business.

After staring at her wall of seeds I gave up on trying to decide on anything and just asked her to recommend something.  She said she noticed I had an affinity for rare or unusual vegetables and I said YES!  But - they also have to be delicious.

I don't want to grow something that's weird or rare just for the sake of individuality. I need it to taste good too. She wholeheartedly agreed (being a chef and all) and pulled out a packet of rare Italian heirloom peppers called Capriglio.

These are the peppers that people ate before bell peppers were invented. They have thick walls, are kind of squat and are perfect for stuffing. Plus she had a killer personal story about getting the seeds so I was sold. 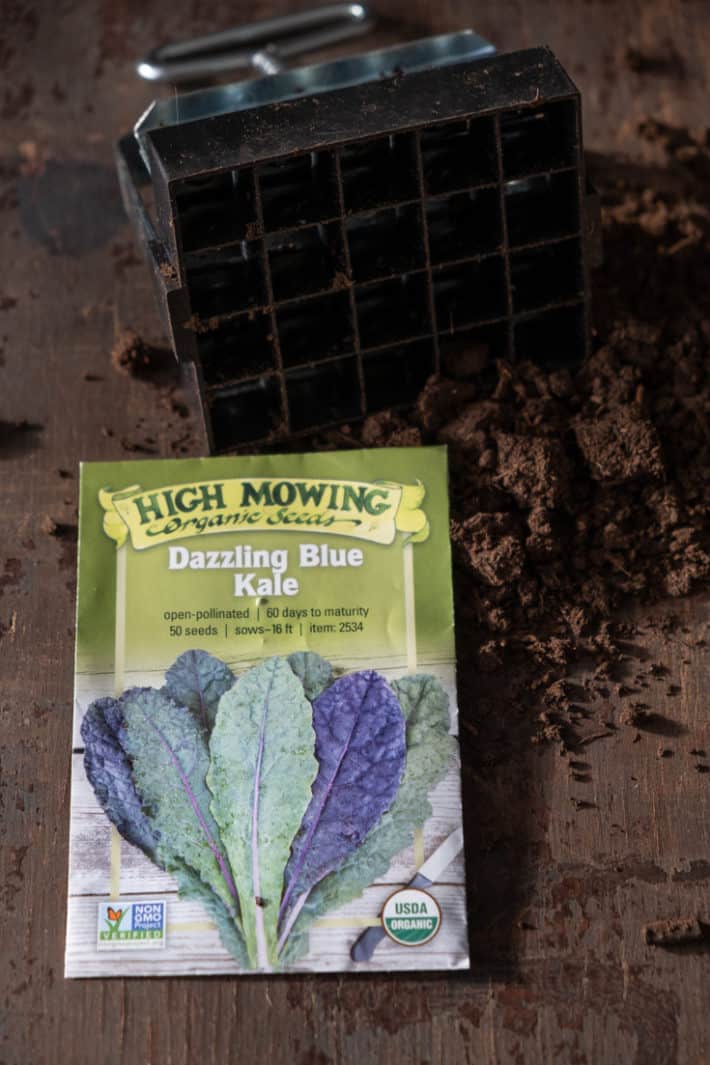 And finally, I bought kale. Don't even ask me why. I don't like kale. I DO however, like one type of kale, Lacinato kale. And this is the same type of leaf as dinosaur kale so I imagine it's of the same original source. Plus it's a cool "dazzling blue" colour. 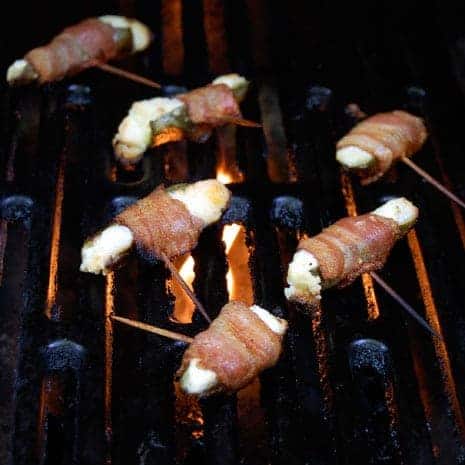 These are the jalapeno poppers that I make and am searching for the perfect mild hot pepper for. I have a whack in my freezer that I'm thinking of scorching my tongue on this weekend. 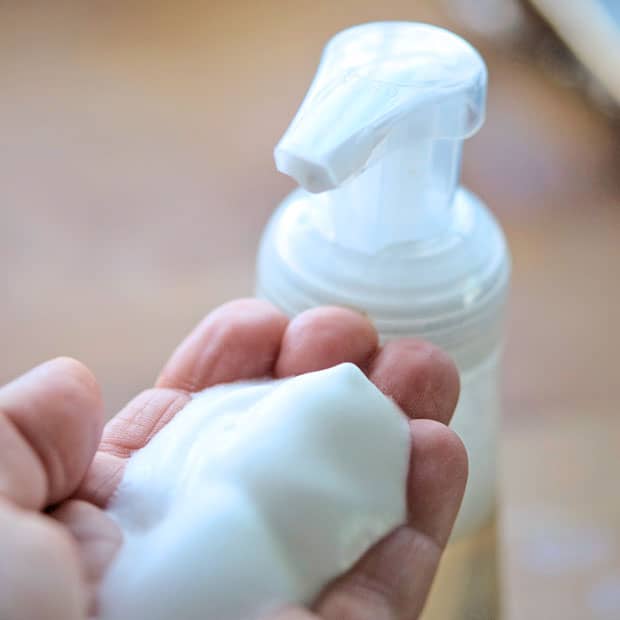 How to Make Foaming Soap

I figure it's just about time to swap out the Christmas pine scented soap from my dispensers to something more spring-like. Because it's almost spring. In my imaginary world. 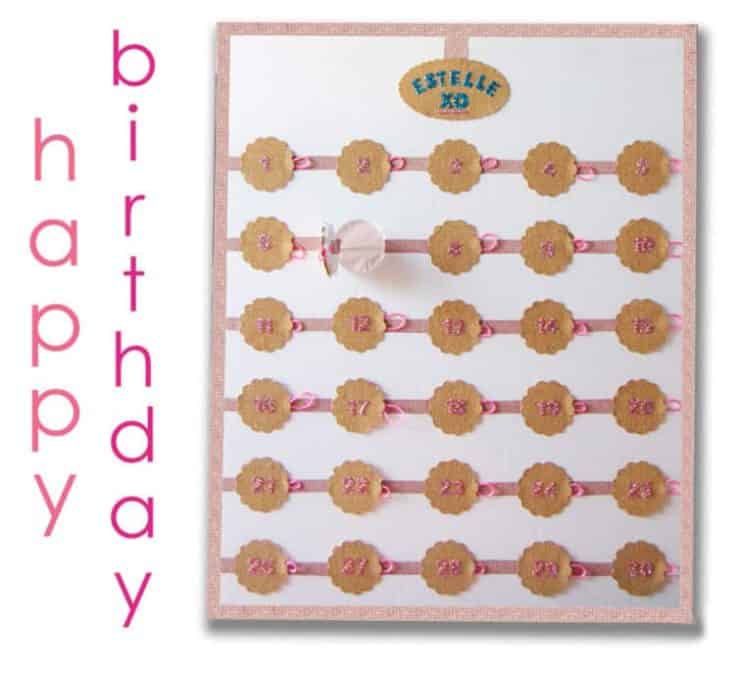 NEVER BE STUCK FOR A BIRTHDAY PRESENT AGAIN. THE BIRTHDAY ADVENT CALENDAR. 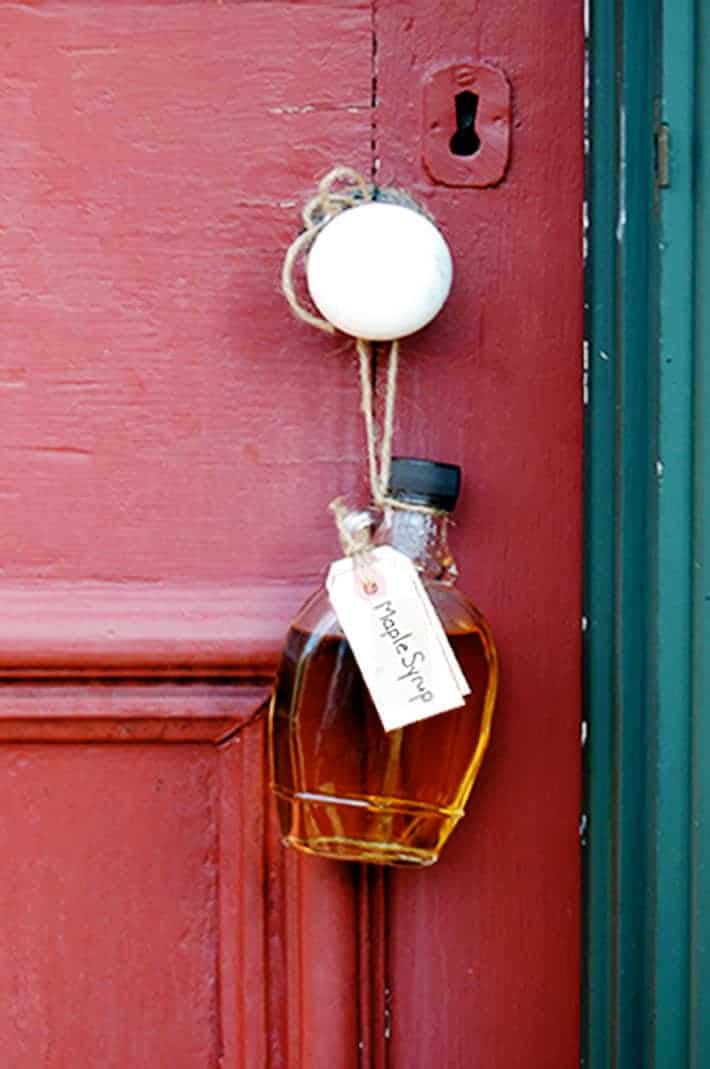 How to Make Maple Syrup at Home. All You Need to Know.

If you missed it earlier this week, I talked about getting my maple syrup supplies out in preparation for the season. Here's how to make your own maple syrup. Now that I've typed that word I have a rather large craving for pancakes or French toast. 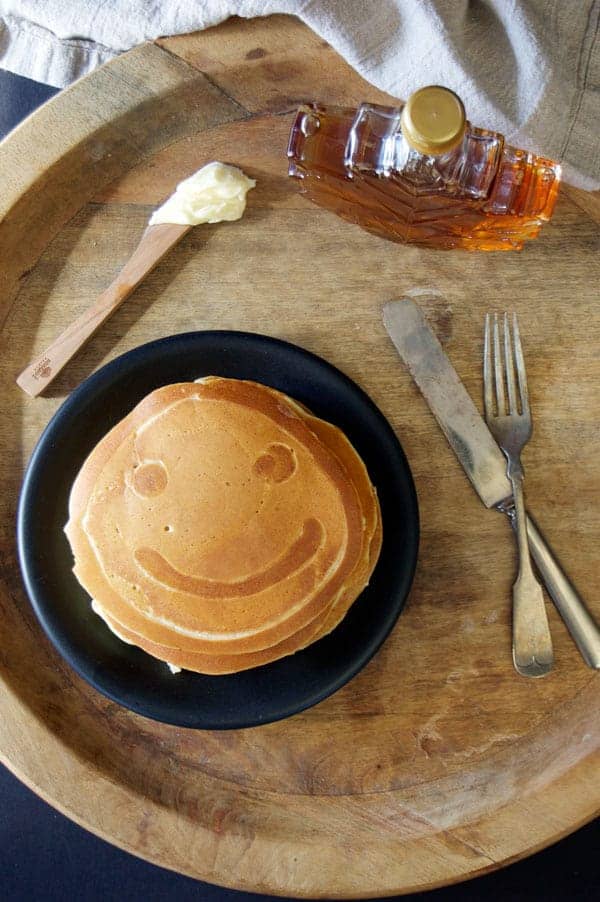 Pancakes with Faces for Shrove Tuesday

Told you I was developing a craving. I'm committing, right here before you to have breakfast for dinner one night this weekend. Pancakes, bacon, fresh fruit, whipped cream and homemade maple syrup. 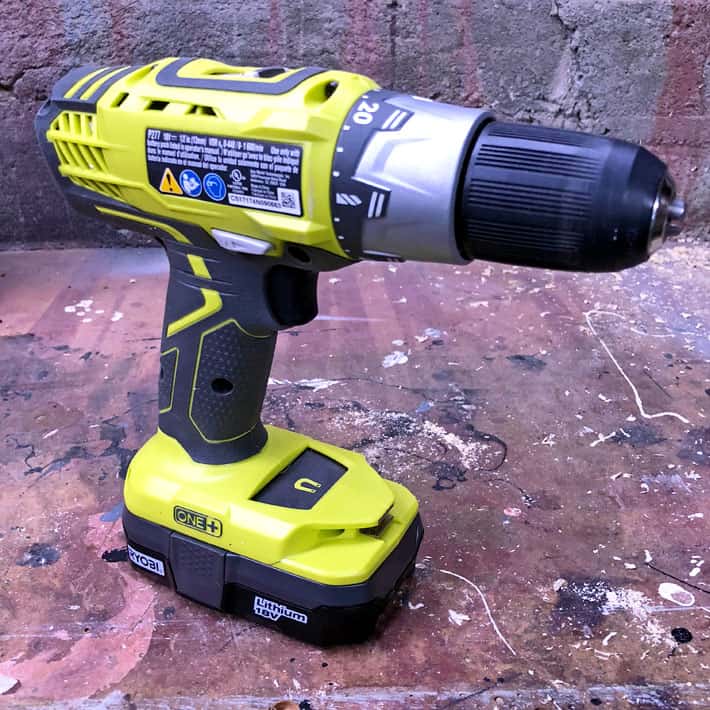 Have a Ryobi Battery That Won't Charge? You Can Fix That.

Also this week in case you missed it, how to fix that rechargeable battery that won't recharge.

Don't forget to enter to win one of TWO copies of the new Floret book "A Year in Flowers". Just click over to my Instagram page to enter.

Have a good remainder of your weekend! I'll be here watching television, building things and avoiding the mall.