Home » Tips » How to Pull Apart a Pineapple.

How to Pull Apart a Pineapple.

I’m sure you’ve seen the viral video making the rounds on social media where someone eats a pineapple by just plucking pieces off of it.  How could I possibly see something like that and not test it out? 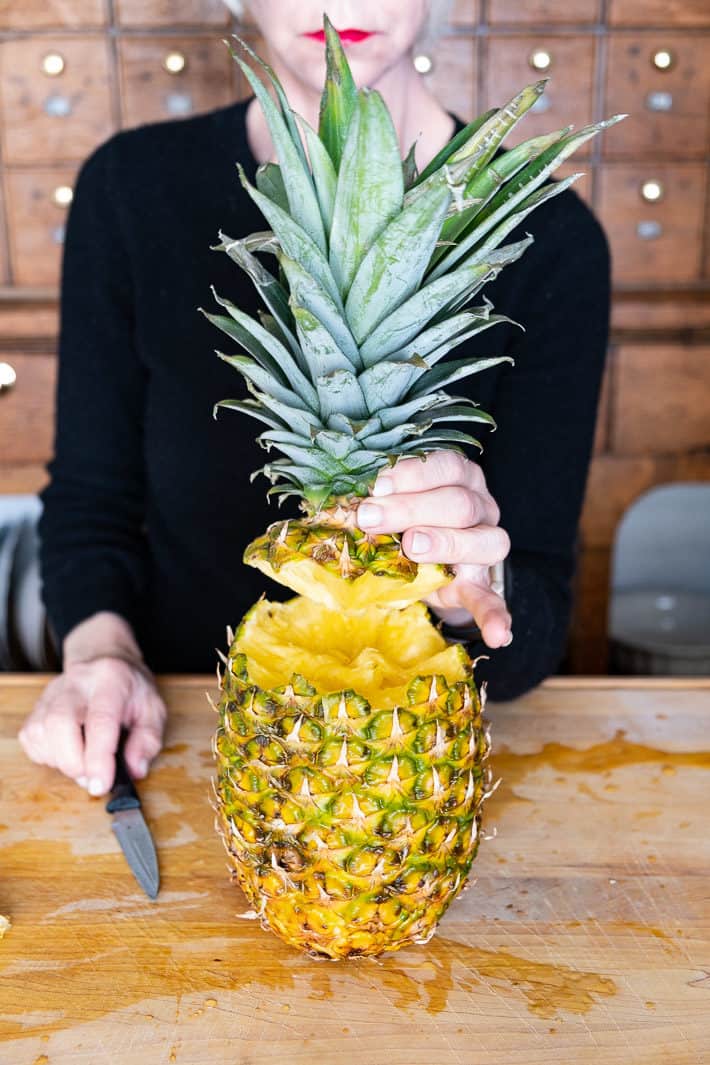 We all know there was zero chance I was going to see that video and not try it myself.  Watching someone magically pluck perfect, bite sizes pieces of pineapple off of the fruit without using a knife, or peeling it or having her nails filled or anything???

If you’ve been living in a cave (with no internet) you may not have seen it but I can assure you it was a BIG thing when this video came out.  Everyone was sharing and  spreading it around like the stomach flu on a cruise ship. WHAT?? How was it possible none of us knew how to eat a pineapple?? How could the world have lied to us this way?? What else didn’t we know?

In an attempt to prove we’re not as dumb as corn chips, I found out a couple of things about that video which I’ll tell you about in a moment.  But first, here’s my attempt at the pineapple trick.

So, it is something that can be done.  Technically.  It’s just a slightly juicier experience than most of us would like to have. 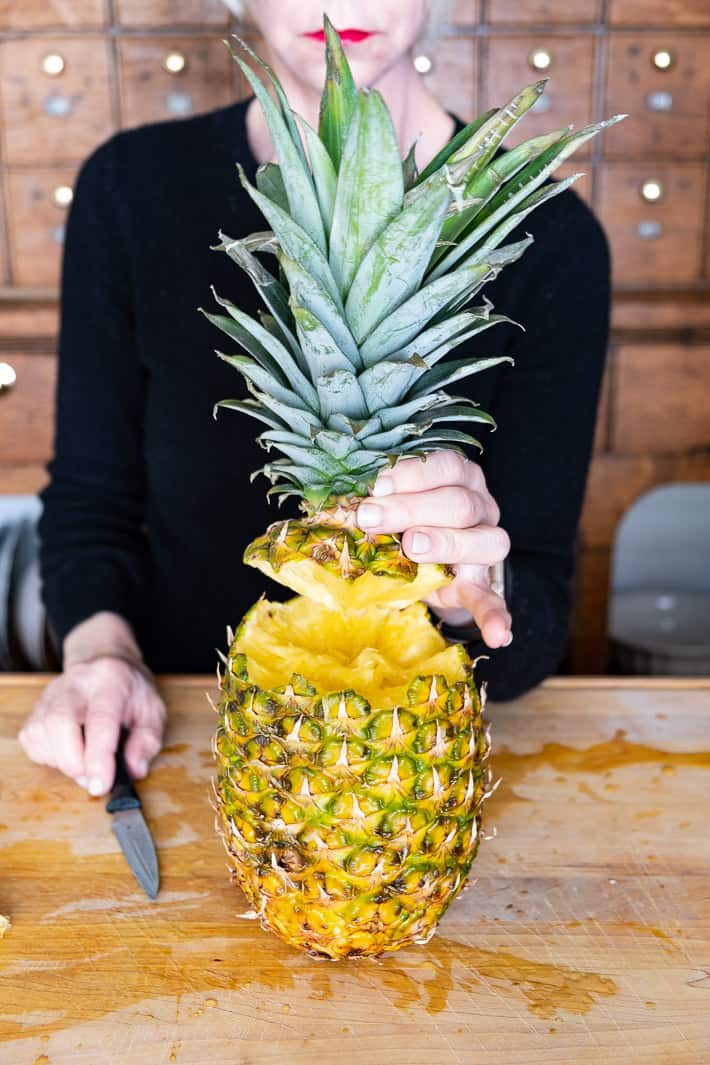 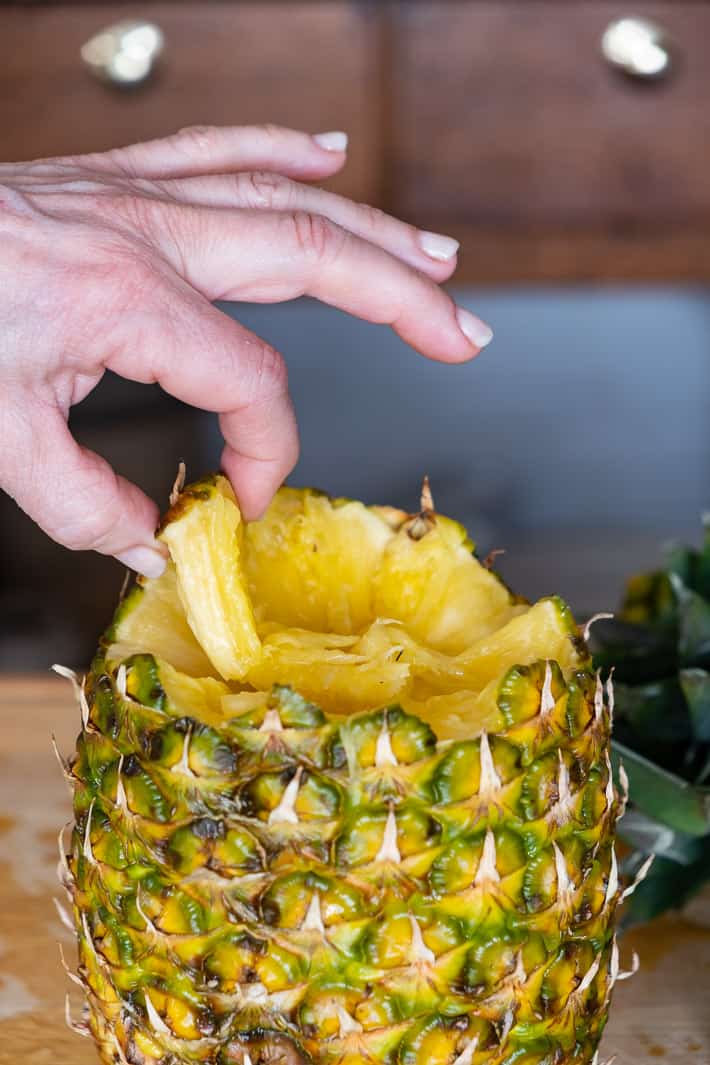 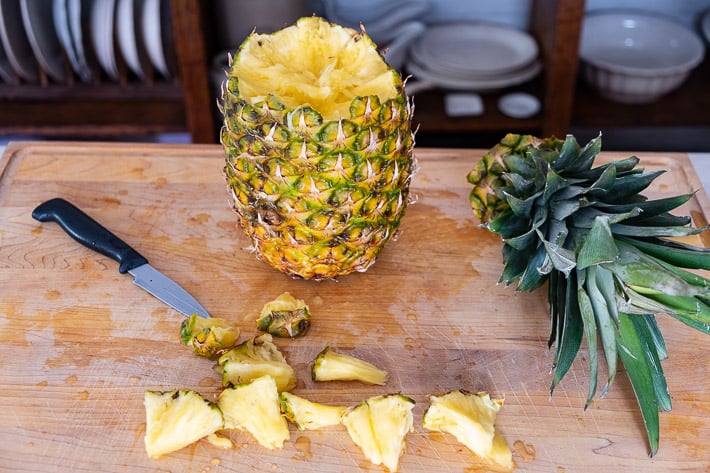 What is the Right Way to Eat a Pineapple?

Well it guess it depends on how fond of mess and stickiness and ants crawling up your arm.

If you like juice across your kitchen, and stickiness running down your forearm until it drips off your elbow attracting the nest of ants that live under your dishwasher then pulling apart a pineapple is the right way to eat it.  Just wedge your thumb under each piece (node? chunk? hunk?) and lift it up away from the core. You might need to score the pineapple first.

If you aren’t into that sort of thing, just slice it like you normally do.

Cut the top off of your pineapple in a zig zag pattern, following the guide of the bumps on the pineapple.

Wedge your thumb under one of the pineapple chunks and pull upwards releasing a perfect wedge of pineapple.

This absolutely works, but the ripeness of the pineapple will dictate how well it works.

If the pineapple is too ripe the pieces will be too mushy to pull away.

If the pineapple isn't ripe enough they'll be difficult to separate and won't release naturally.

After a tiny bit or research I found out that there are different varieties of pineapples. One of those varieties is called the Tainung No. 4.  It’s known as the Easy Peeler Pineapple, and it has very little fibre, is mostly fleshy and ISN’T very juicy.  And as far as I can tell you can only get it in Taiwan.  More research led me to this article that concurs, the pineapple in the video is probably a very specific type of pineapple.

Having said that, it did work on a regular pineapple and turned it into a snack-able food that you can just set out and pick pieces out of.

It has to be a ripe pineapple. An unripe one just won’t pull apart.  But if it’s tooooo ripe then it’ll be too mushy to pull apart as well. It’s a conundrum.

Like a bowl of potato chips (if you went to the grocery store to buy potato chips, but they were out of them, and you were forced to buy a stupid pineapple.) 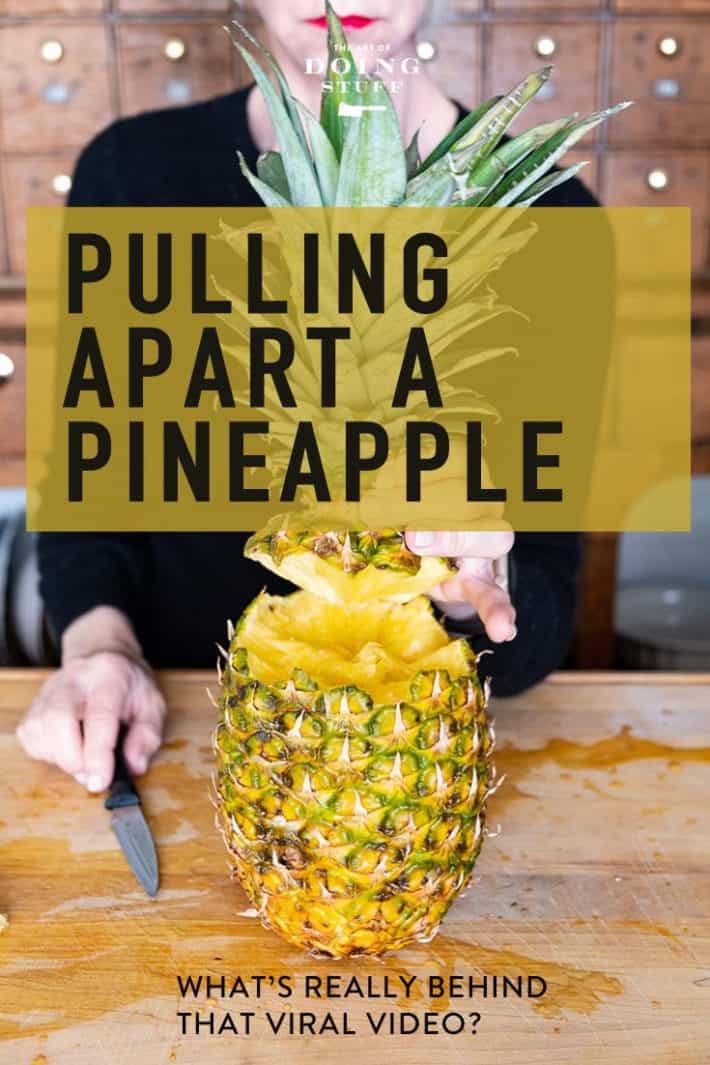