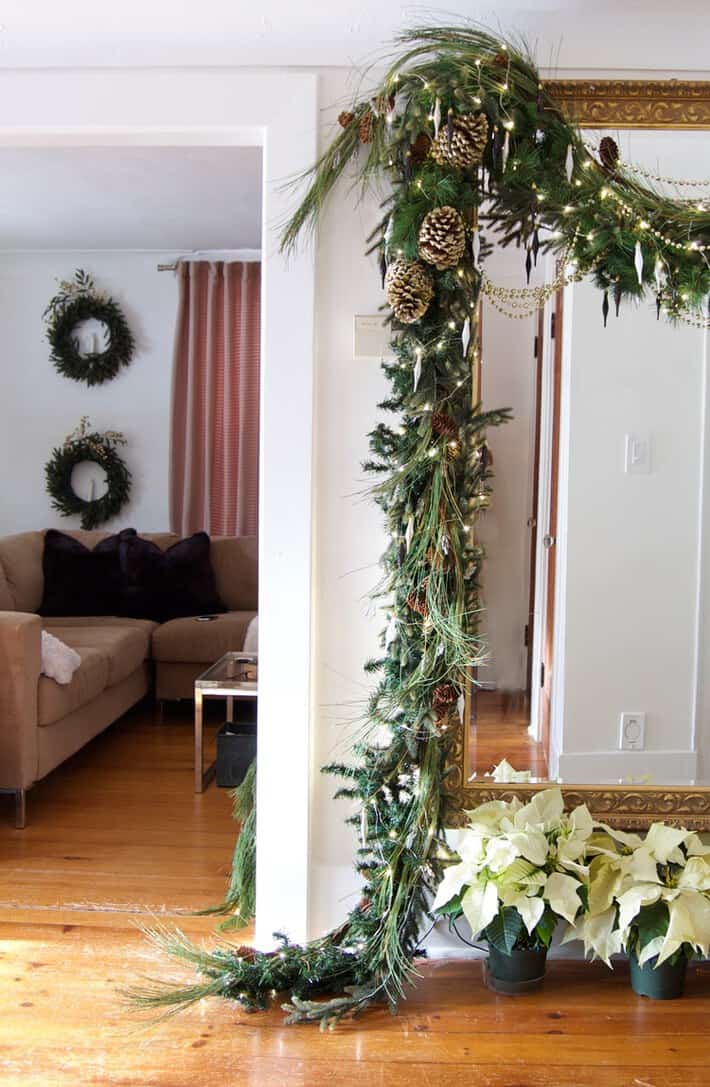 You're a wrestler you say?  A crossfitter?  A yoga expert?  Yeah, good for you.  You must be so proud. Pftt.  Amateur.   I am none of those things, but I'm still more of an athlete than you.

I excel in the sport of Christmas decorating.

I train just as hard as you, carb load not only before the big game, but during and after it, *plus* win or lose I'm covered head to toe in gold sparkles for the entire month of December. I'm like a walking gold medal.  If you propped me on a pole I'd look like Brandi the Christmas stripper, only I'd have cookie crumbs in my bra instead of money.  I'm awesome.

Look, I know at this point you're feeling a bit intimidated by my obvious superior athletic abilities, but don't be.   We all put on our team jerseys one arm at time. It's just that your jersey is some stupid, super-boring one that reduces you to a number while mine happens to be a pair of tree sap covered pajamas with 4.5 pounds of artificial garland and mystery dirt stuck to them.  So again, awesome.

I also realized that this is the first time you'll see what's become of my foyer since removing all of the bookcases.  This is a very exciting post indeed. 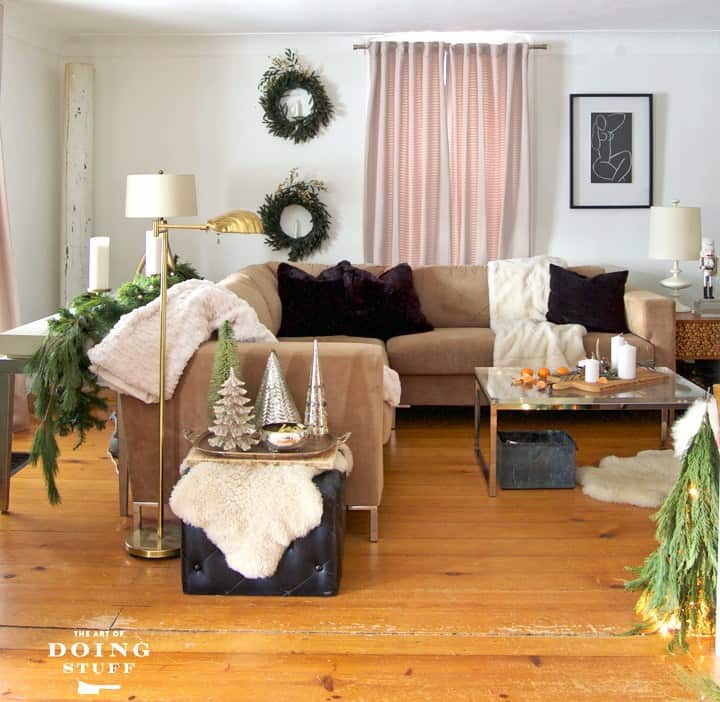 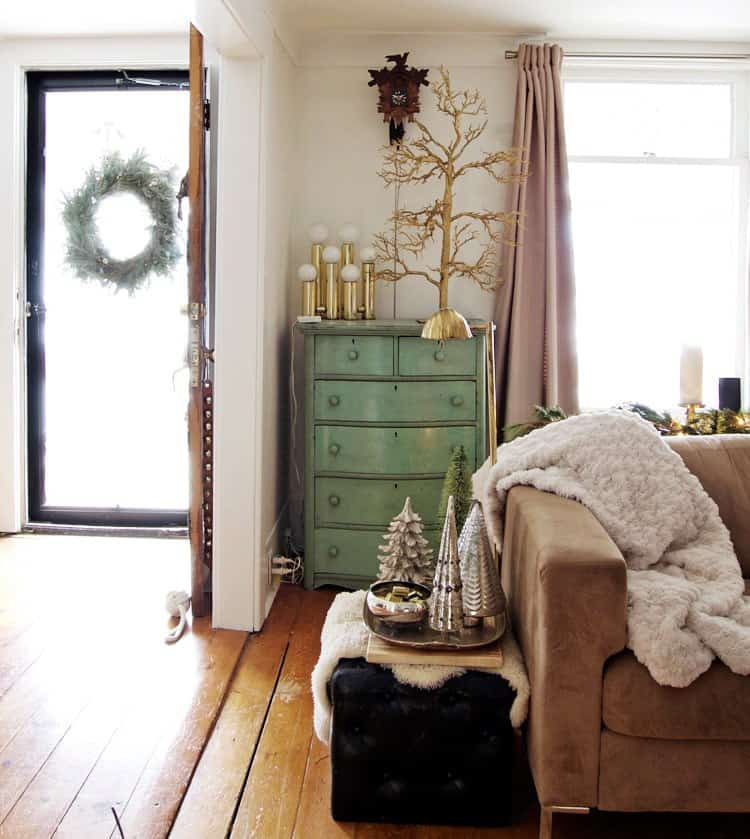 This year it's out with all white and in with big hits of black. 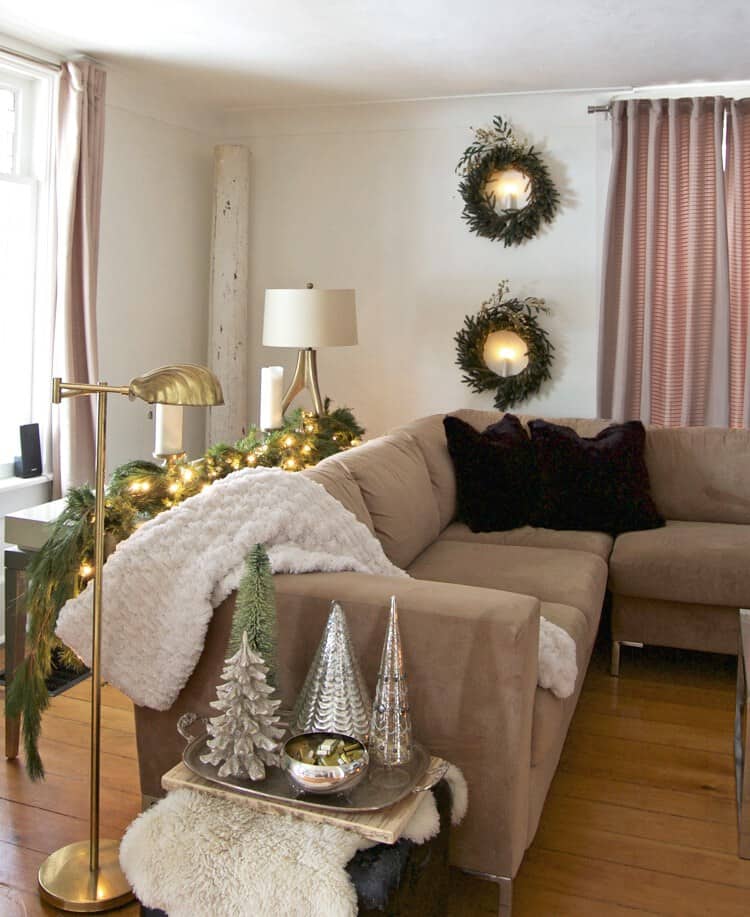 It's also a bit of a turnaround for me in terms of shoving some of the simple, minimalistic, decorations to the side in favour of big, fat, cookie eating decorations.  I have retired the anaemic garland I've loved so much over the past few years and I'm embracing my inner Dynasty. 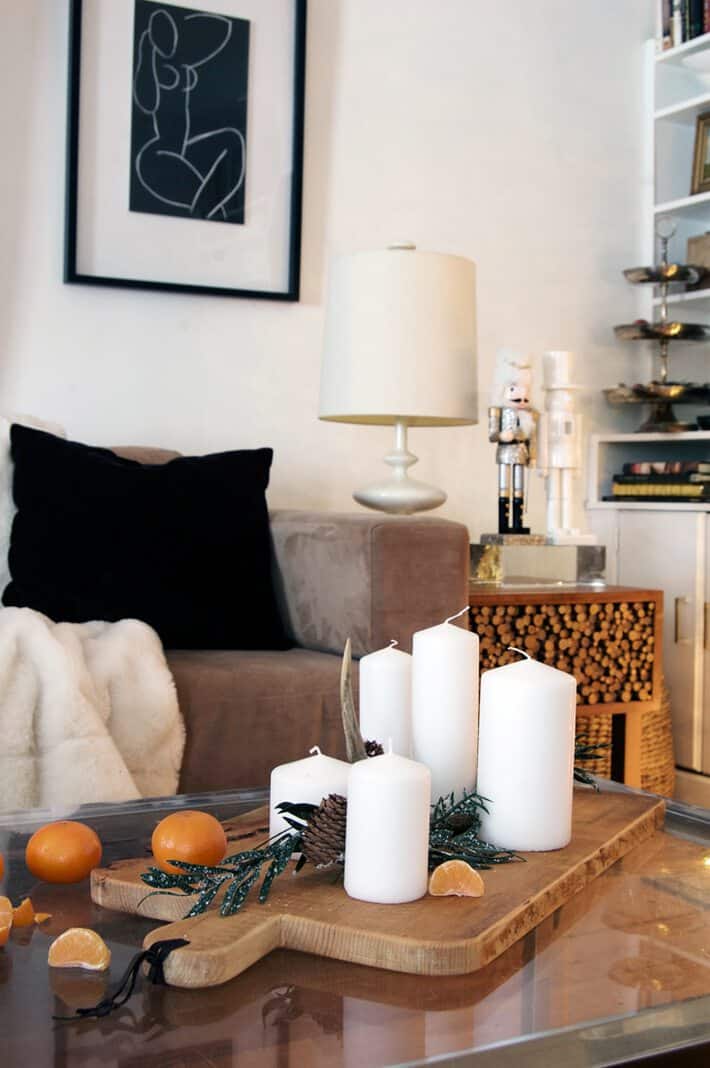 Which is not to say that everything is over the top.  Everything over the top is too much, just like eating an entire Costco sized chicken pot pie is too much. Sometimes.    My coffee table decoration is just one of the cheese boards I made with a few candles on it. 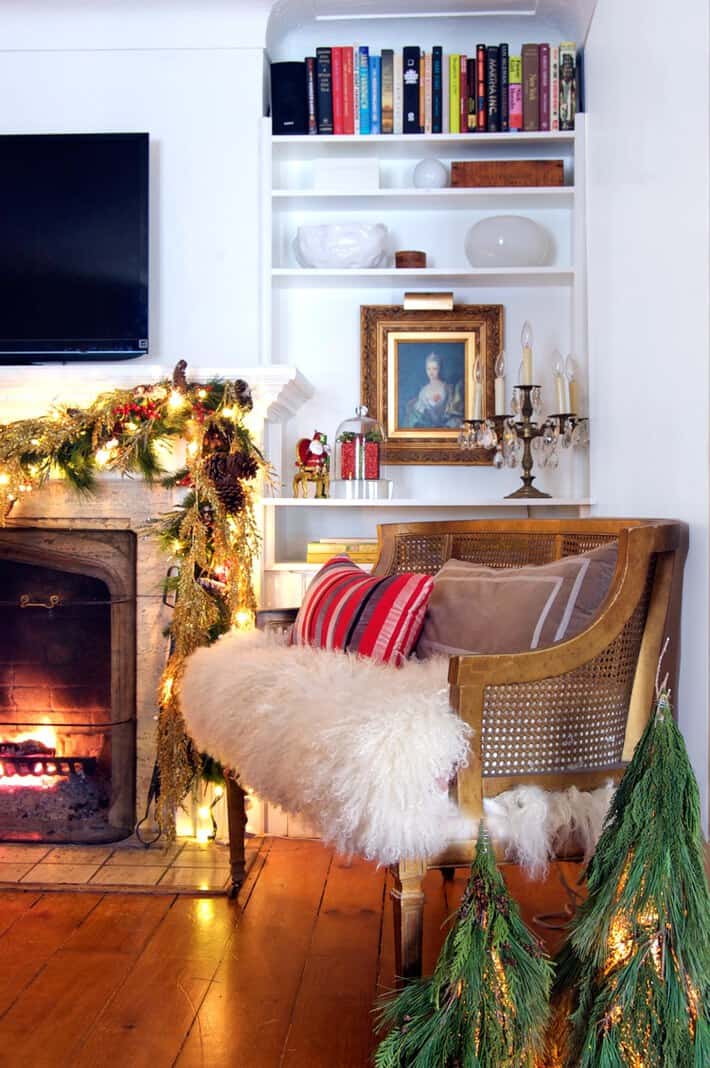 All of the garland in the house though?  Yeah, every bit of it is totally over the top with a capital Carrington.

Ready to see the new foyer? 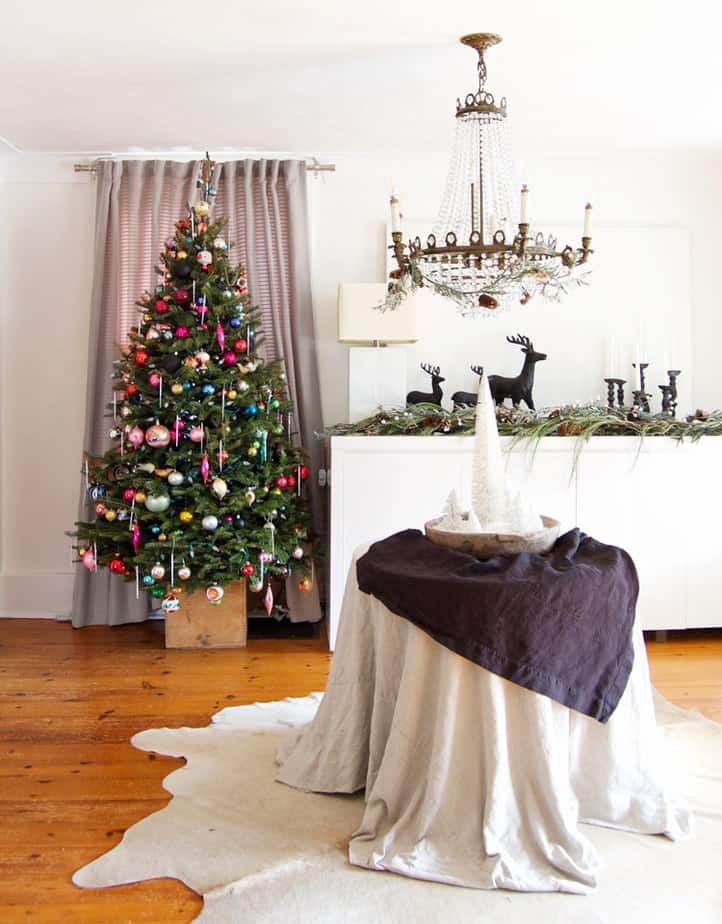 There are so many things in this picture that I feel compelled to tell you about.

The tree.  For the first time in my life I bought a surprise tree.  One of those things wrapped in netting and twine, smashed up so tight you have no idea what's actually inside.  It was like a tree wearing Spanx.  I was excited and terrified to cut it loose for fear of what might come boinging out at me.

As luck would have it the surprise tree was perfect.  Too perfect in fact. I had to take a pair of shears to screw it up a bit.

The tablecloths    Those are not tablecloths over my foyer table.  The bottom, natural coloured one is my linen duvet cover and the black one on top is my black linen pinafore.  I'm very cold at night and very dirty while cooking, but my foyer looks good.

The Chandelier  You might remember my $100 Kijiji chandelier.  Once I got it together I discovered it's missing a lot of crystals and one of the arms causes the bulb (and my dimmer) to blow out.  Sooooo watch for a DIY on how to do a little electrical repair on chandeliers the first week of January on the blog. 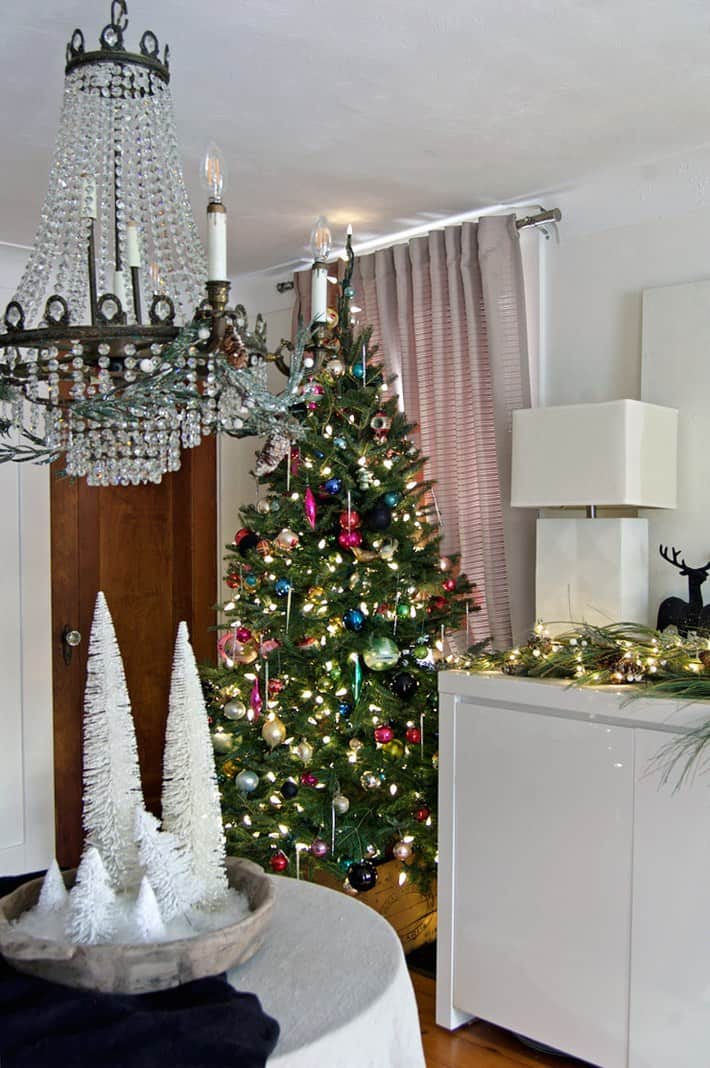 I still haven't figured out an option for window treatments but I won't be able to do the thing I most wanted which was interior wood shutters.  There just isn't room for them to open on enough windows.  So I've half decided to go with simple roman blinds, just like the ones in my kitchen.

You won't find any photos of my kitchen at Christmas in this post incidentally because it looks exactly like it did last year, so just take a look at my Christmas House Tour 2015 if you want to see what it looks like at this very moment. 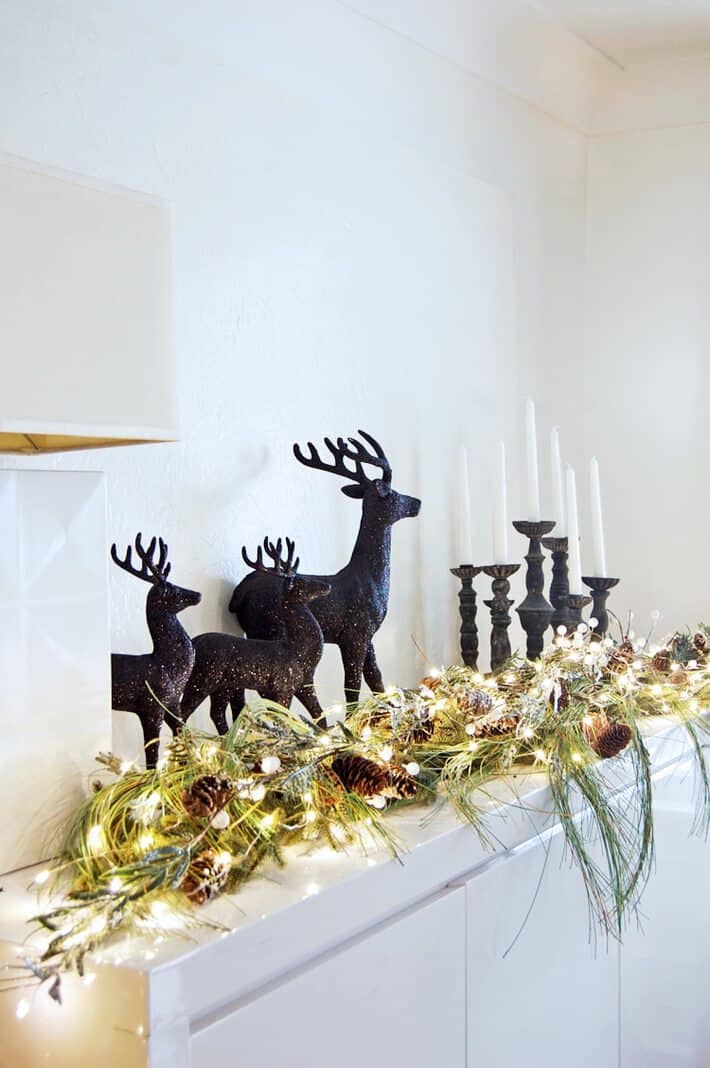 I brought the black into this room with the black metal candelabra at the end of the buffet and 3 black reindeer.  Black decorations were hard to find this year but I'm guessing by next year they'll be way easier to come by.

Simple, rustic and white have been in for so long that there's bound to be a backlash soon by way of people clamouring for the opposite of white and simple.  Black and brash. 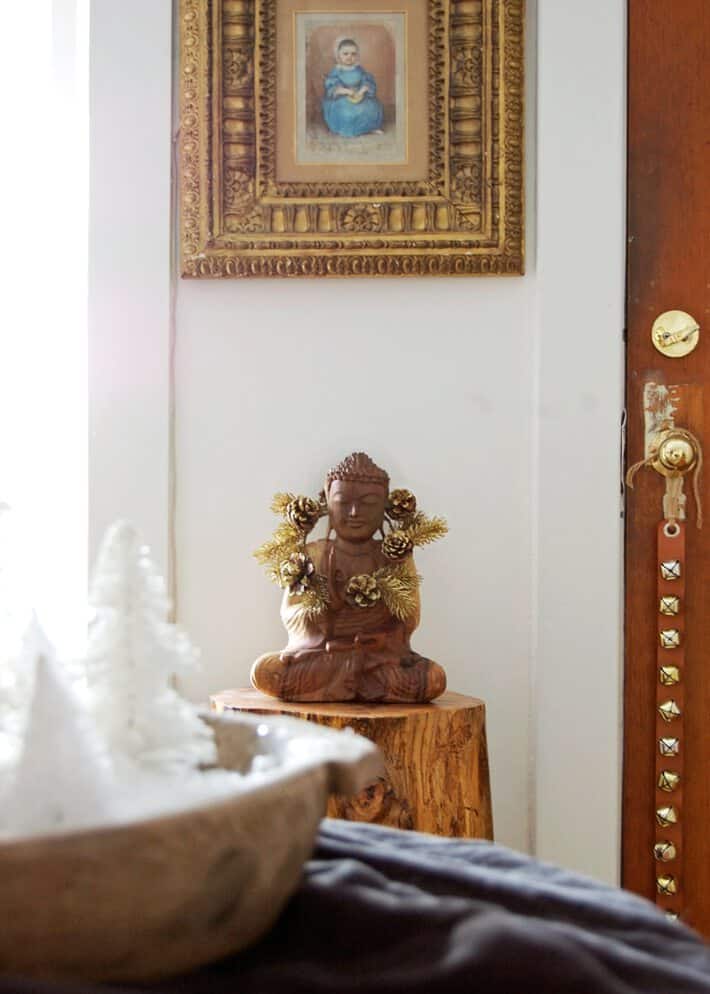 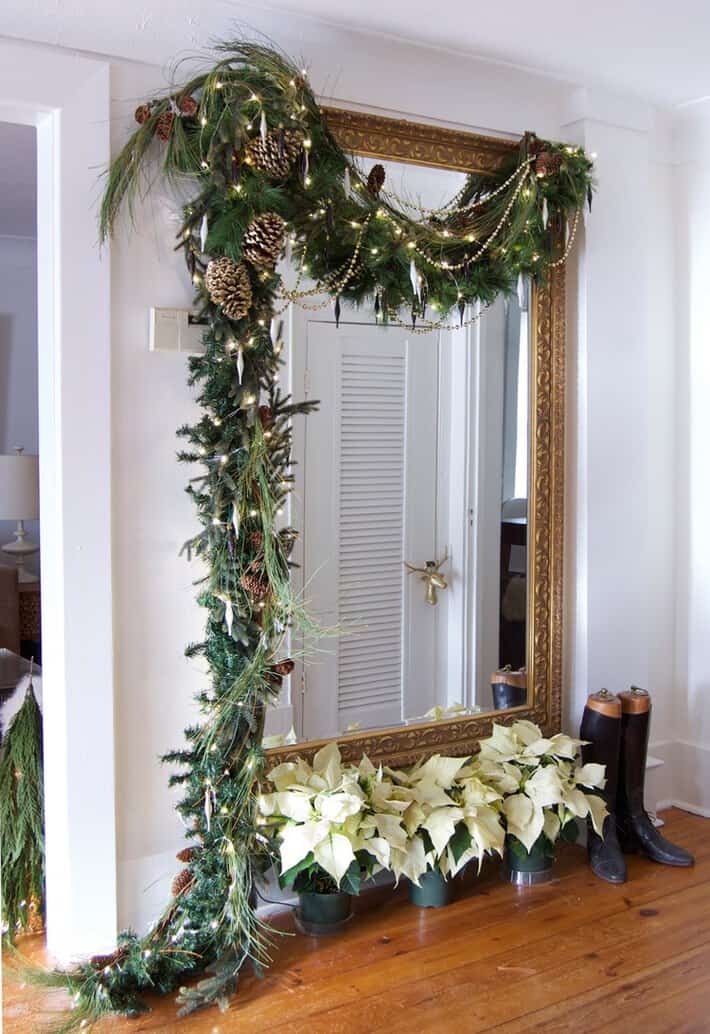 Enter Dynasty era garland number 4.  It's 3 or 4 garlands twisted together with pinecones, gold beads and black and white ornaments added to it.  It. Is. Over. The. Top.

Are you ready for the dining room and the completed bookcase project that caused me to run naked and screaming through the streets?  (that's rhetorical if you happen to be one of my neighbours) 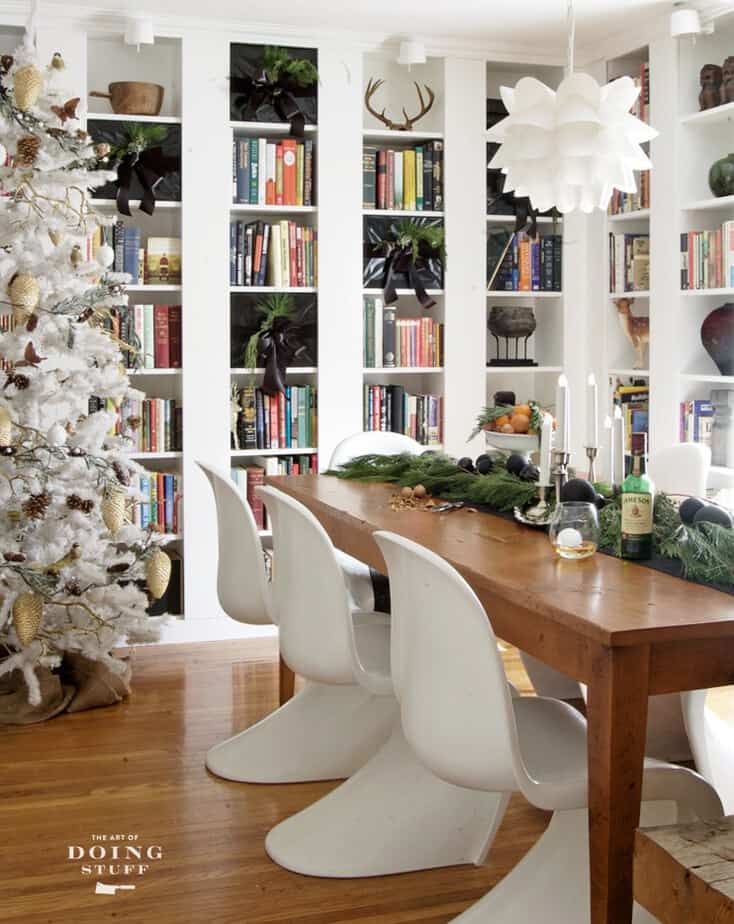 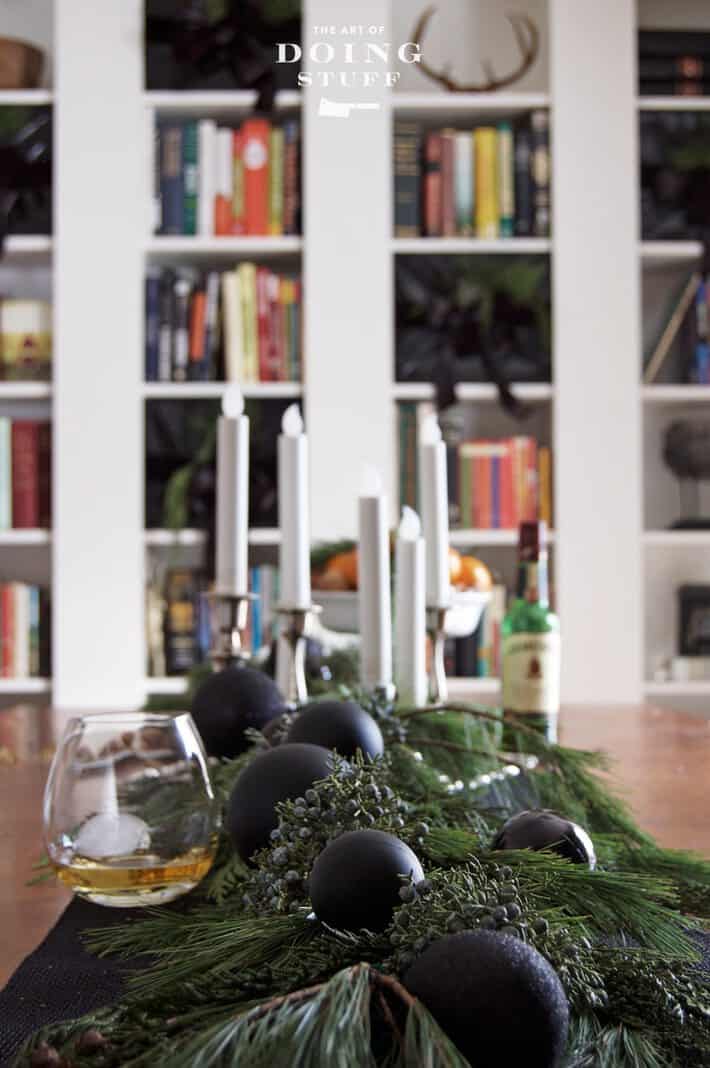 Enter the black dining room accents.  Black ornaments tucked in the garland which is sitting on a black burlap runner. 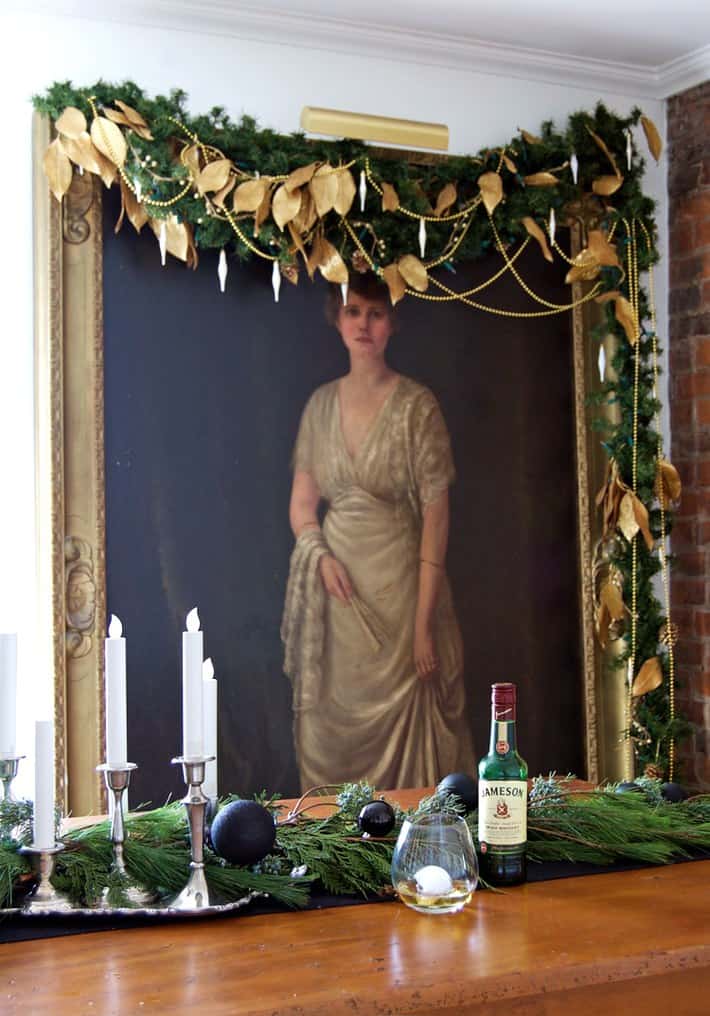 Margaret is the beautiful black backdrop to it all. 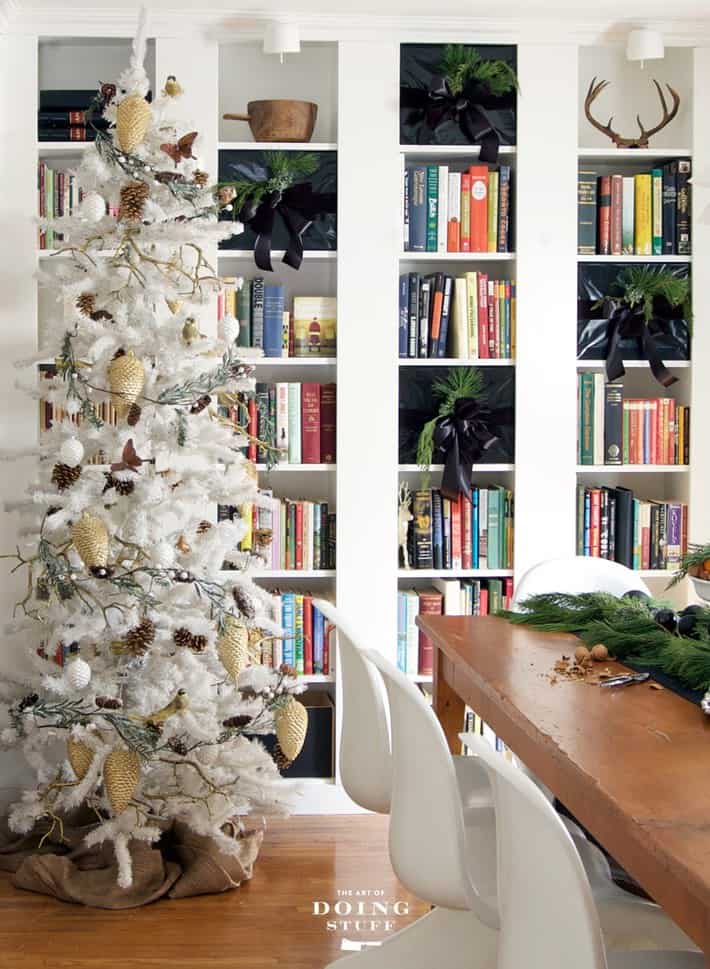 And then of course there are the black presents, inspired by basketball coach Amos.

I hope you enjoyed your Christmas tour through my house this year, I'm glad you could make it. I'm even more glad that you're only imaginary here because then I don't have to make small talk and you don't have to worry about breaking anything.

It's been an exciting post hasn't it?  So exciting you might feel inclined to tip me.  You don't need to. But if you insist,  I shall keep my bra open and ready for you to stuff with cookies.