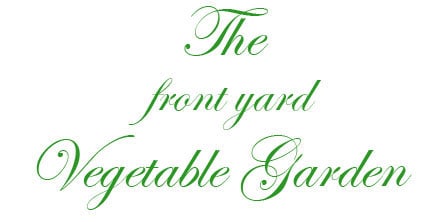 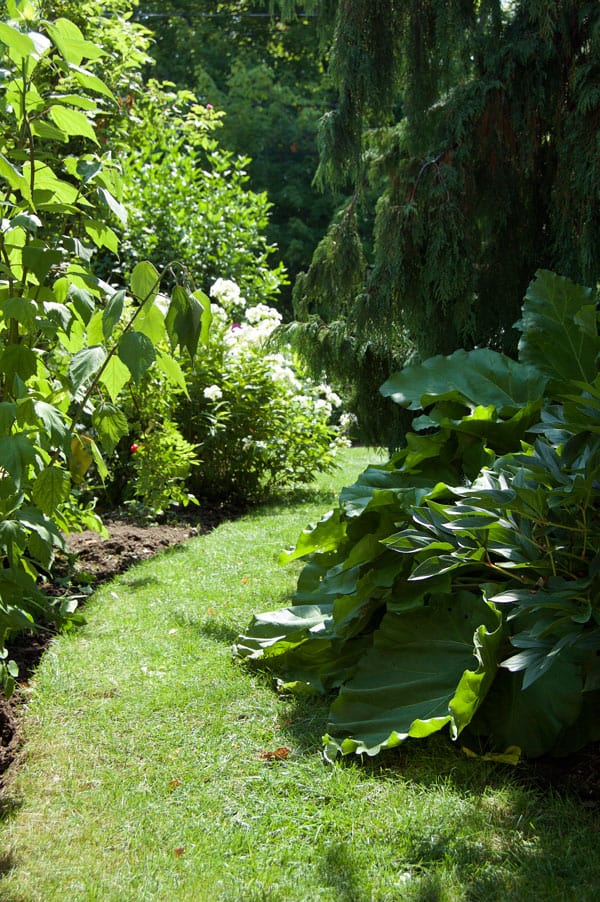 Yeah, so the good part is over.  The side yard, where there are very few vegetables aside from a couple of potato plants and the massive rhubarb you can see in the foreground, is the most attractive part of the front yard this year. 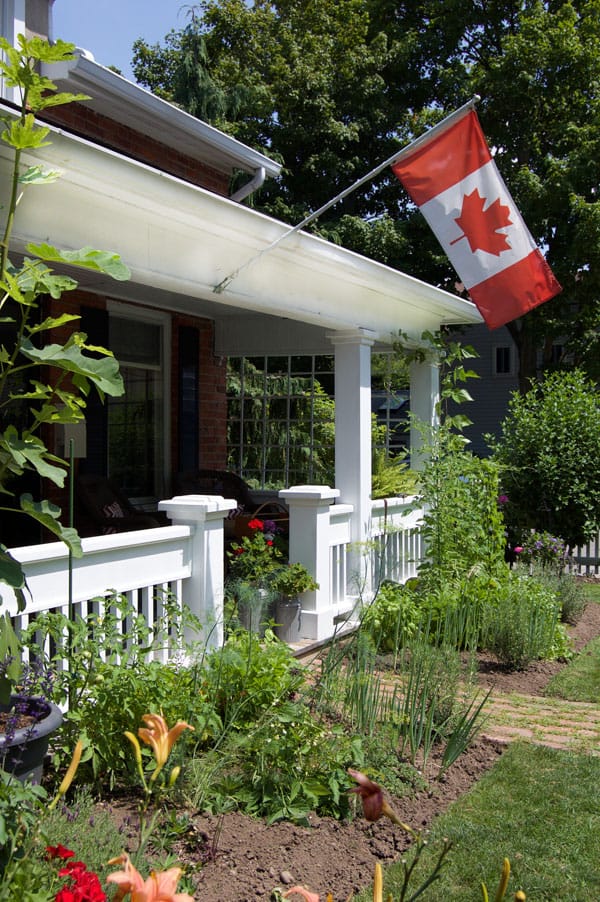 See?  I wasn’t fibbing.  Although  I don’t blame you one bit for assuming I was fibbing as I am a notorious fibber.  To be honest fibber gives you the impression that they’re tiny little fibs.  I’m actually more of a big fat liar.  Like that time I told my neighbour I had no idea how that garlic got planted in her yard.  Or the time I told my cat nobody was laughing at her, even though clearly they were because I had put a baby bonnet that said “Let’s Rock” on her. 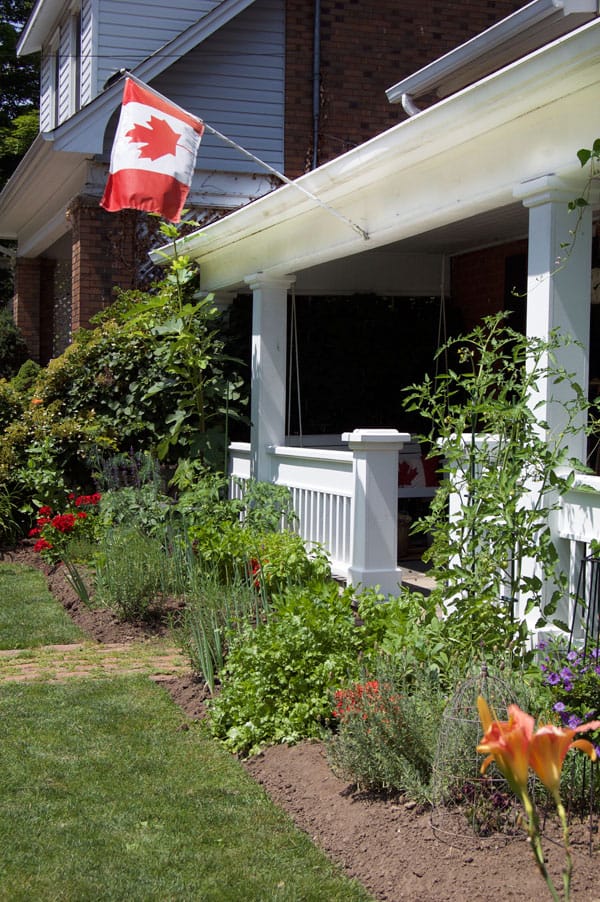 Since I now have a 20′ x 40′ community garden plot, (Update, I now have this GLORIOUS 40′ x 40′ garden plot) I don’t need to use my front yard for the sort of stuff that took up a lot of space like sweet potatoes, regular potatoes and 15 varieties of tomatoes.  Getting rid of the squash alone freed up all kinds of space.  I love being able to run out and grab food in the front yard so those are the sort of things I grew there this year.  Green beans, herbs, celery, a few tomato plants … 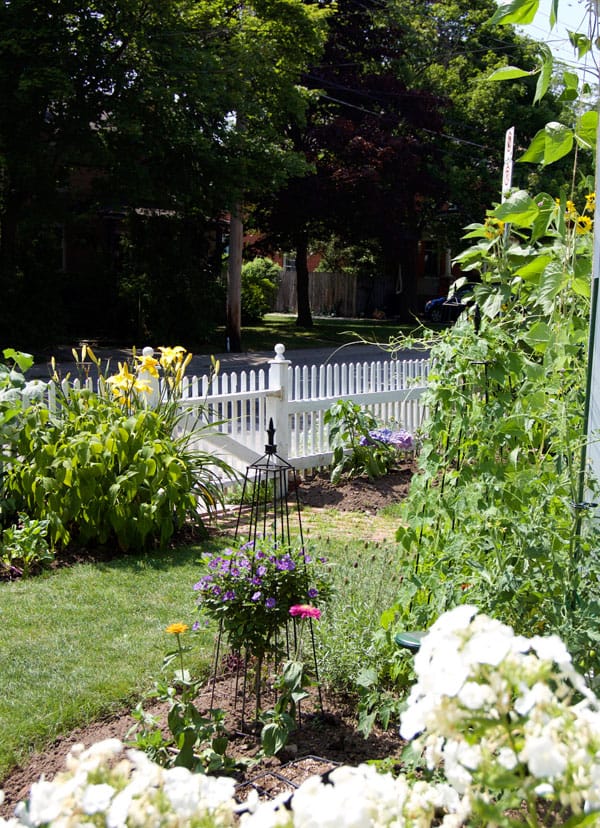 I thought getting rid of all the big stuff would make the garden look neater but all it’s done is make it look anemic. 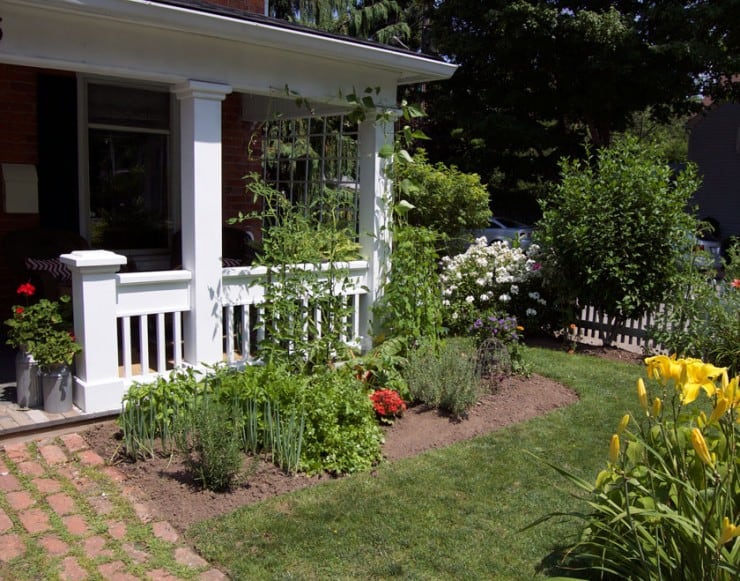 Luckily I have a plan, it was just too late to implement it this year when I came up with the idea. 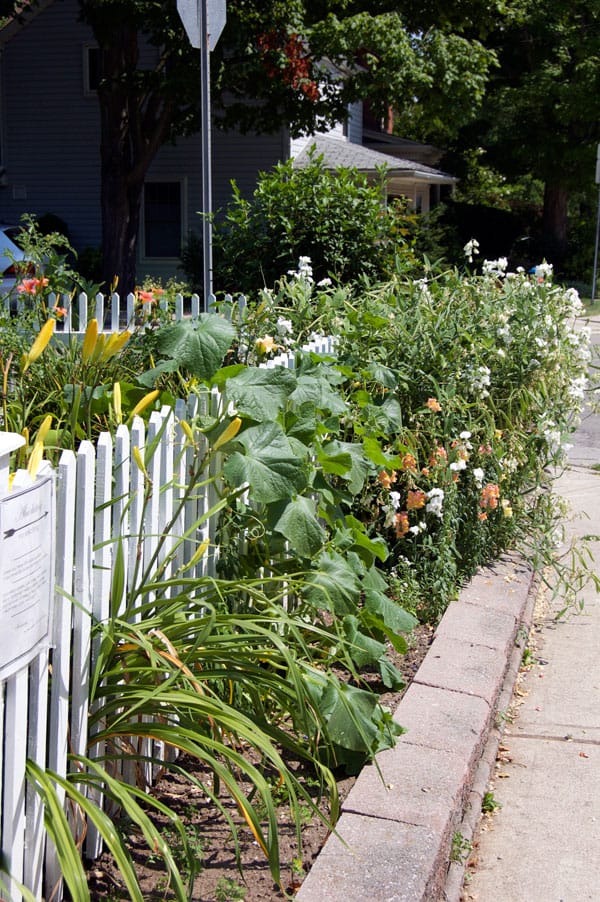 An English cottage garden is basically a garden that mixes perennials and vegetables.  Although it doesn’t always.  Sometimes it’s just perennials.  Things are grown close together so that when the vegetables come out of the garden, there’s still a lot of garden left to look at.  Heights are always varying and there’s sort of a “just thrown together” look to it.  Which is really hard to do without it looking like it’s just thrown together. 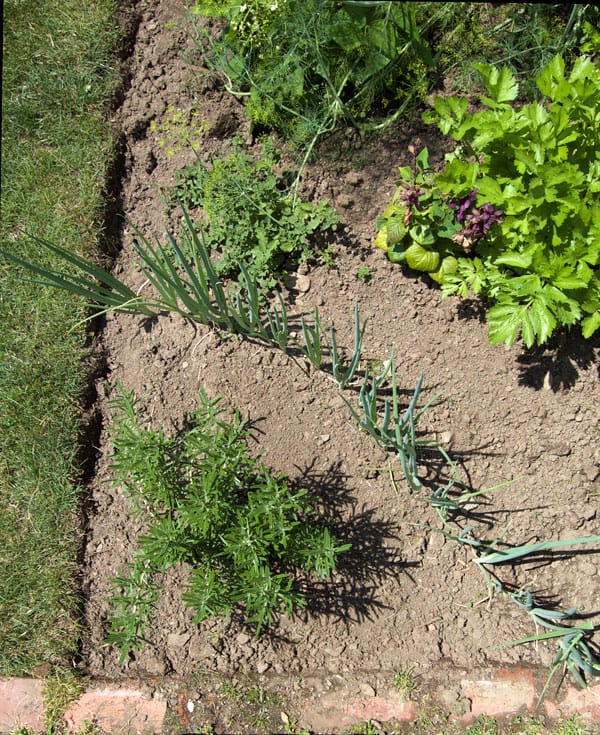 Typically things are grown in clumps as well as opposed to lines.  So I wouldn’t be planting my green onions in a line like this. 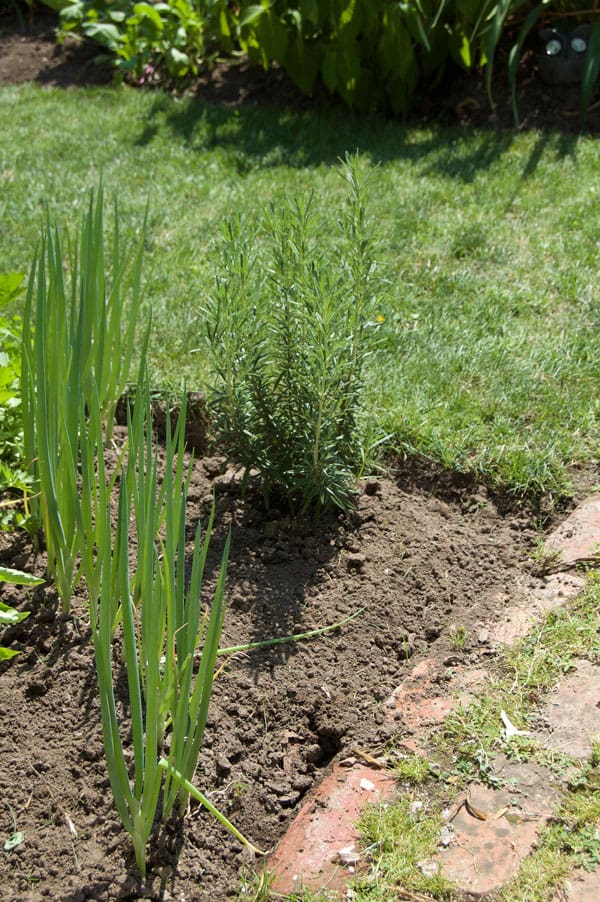 A potager garden would also be wayyy easier to make look good.  There’s nothing harder than making something that’s messy (an English garden in this case) look neat. 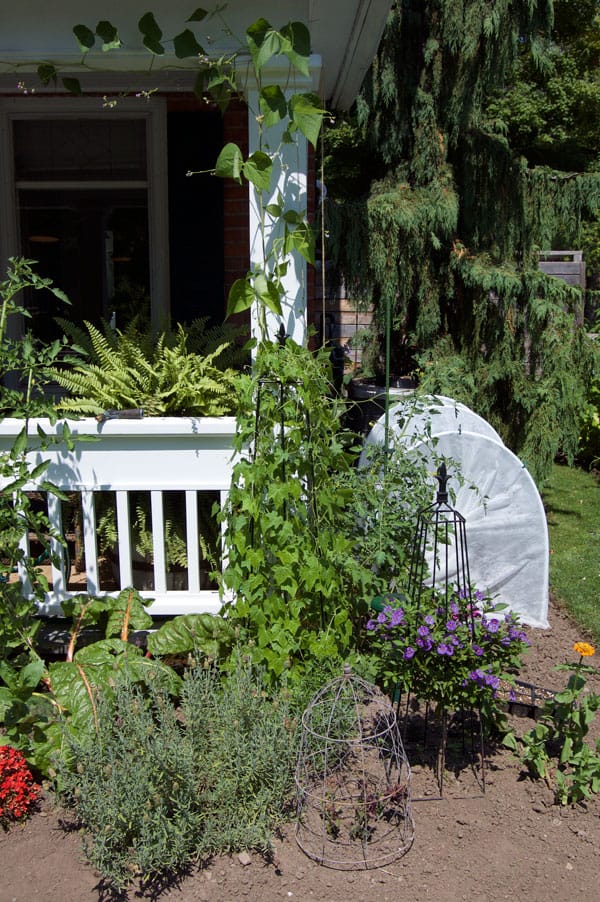 This corner of the front yard vegetable garden has a tiny bit of the feel of an English cottage garden.  There are flowers, herbs and vegetables all growing together in separate clumps.  The green beans growing across the porch works really well. Everything just needs to be bigger.  Fuller.  More demanding of your attention.  Like Beyonce.  I need to Beyoncify my garden. 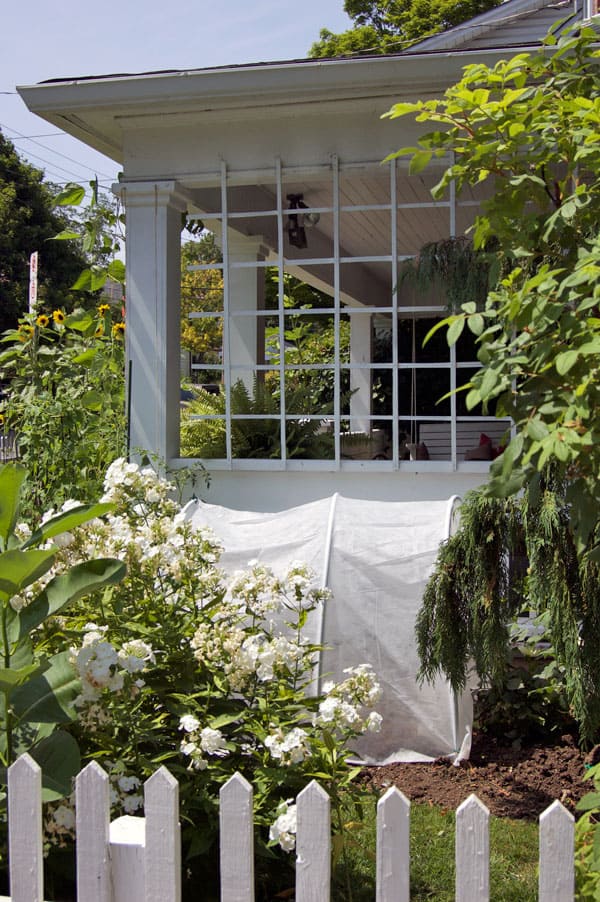 Then there’s the dreaded black kale.  We’ve had more cabbage moths this year than I’ve ever seen and they almost completely ate my black (dinosaur) kale even though I was constantly monitoring it for cabbage worms.  Finally, a few weeks ago, out of exasperation I moved my kale.  I also moved a tomato plant, some flowers and a bunch of herbs.  I just dug everything up with a huge amount of soil around the roots and put it where I wanted it.  Nothing withered, nothing died.  If you plan to do something like this try to do it either in the morning or evening when it isn’t so sunny out.  I didn’t of course, but you should. Also get your hole dug before you dig up the plant so you just have to lift it with a shovel and place it in its new hole. This is also solid advice for burying a body that may have died of unnatural causes. Due to not emptying the dishwasher one too many times. 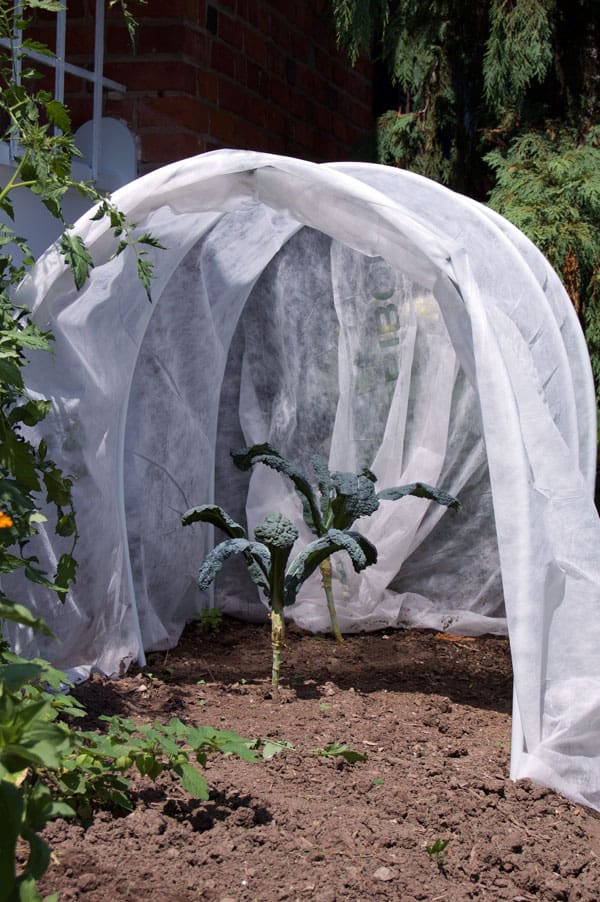 Once I moved the black kale, I put up some hoops and covered it with row cover.  That way no cabbage moths can get to the kale plants to lay their stupid eggs on it, which hatch into their stupid caterpillars.  I stripped all the leaves that had a lot of caterpillar damage and checked the plants very closely for any remaining eggs or caterpillars.  Once I was satisfied they were clean I closed it all up and things have been great between me and my kale ever since. 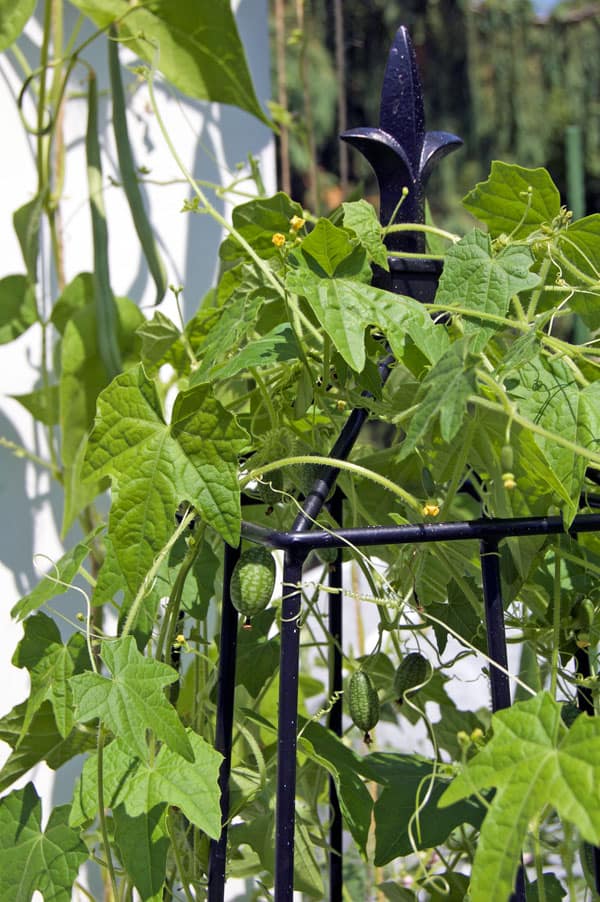 Did you notice the black obelisk in the shot of the corner of the garden? It’s covered with mouse melon. 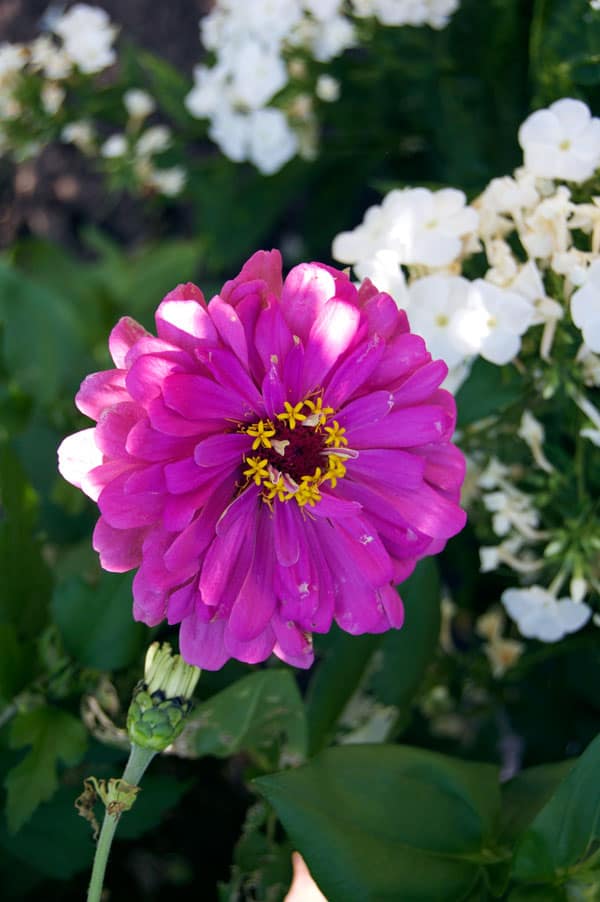 I grew a bunch of zinnias from seed in the spring and never thought they’d amount to anything but as it turns out they’ve amounted to a lot. 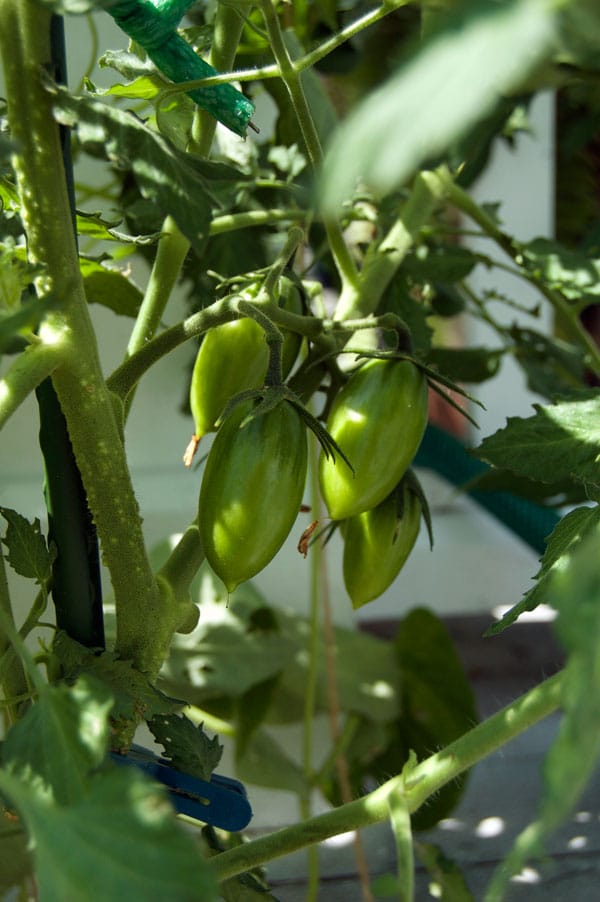 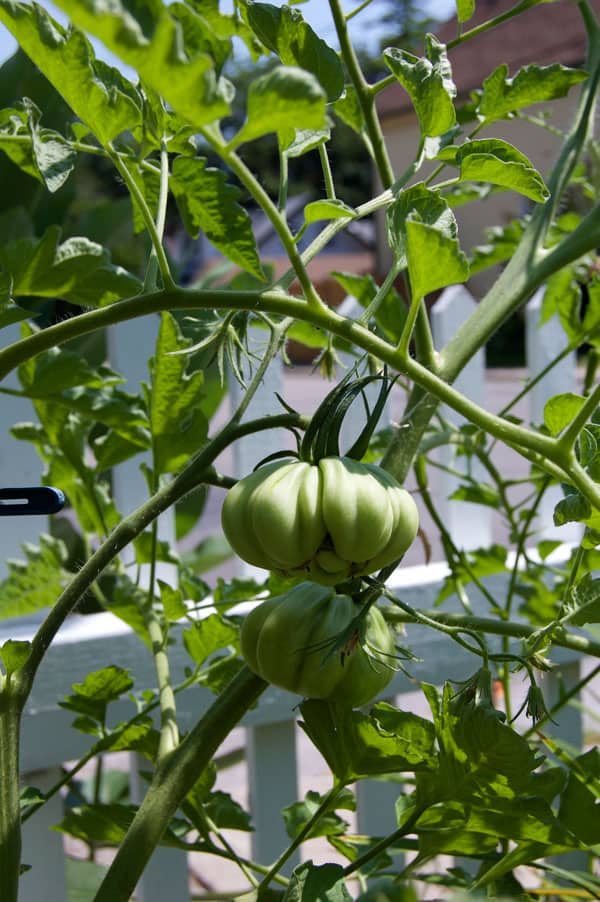 The Zapotec tomato is pleated all around and looks really great when it’s sliced. 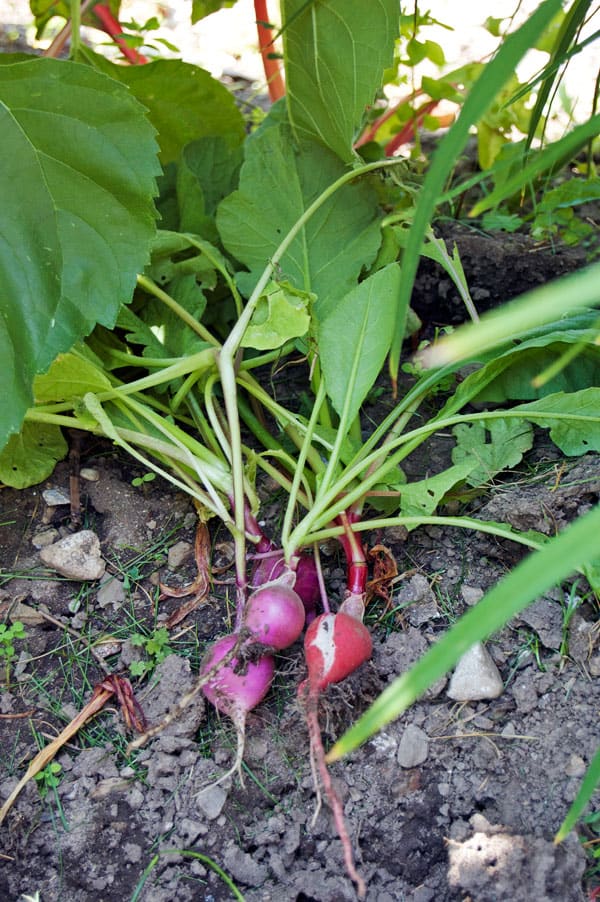 The last of the first planting of radishes.  I planted another batch in the shade a few weeks ago so they should be ready to pick in a month or so.  Normally radishes are ready to pick after 20-30 days but since it’s too hot for growing radishes I planted the in the shade to keep them cooler.  It’ll take longer for them to grow but my chances of actually getting radishes are better. 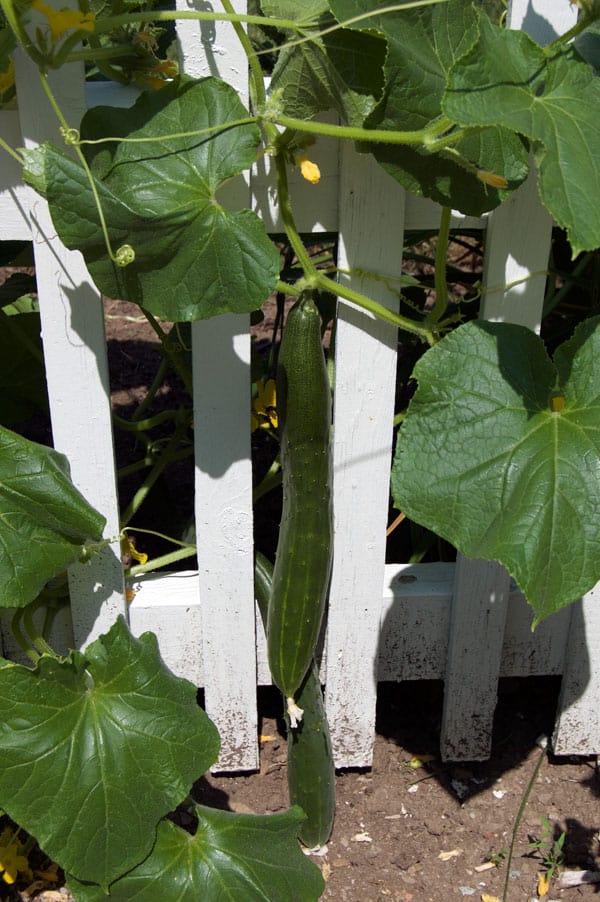 I use my picket fence for cucumbers. 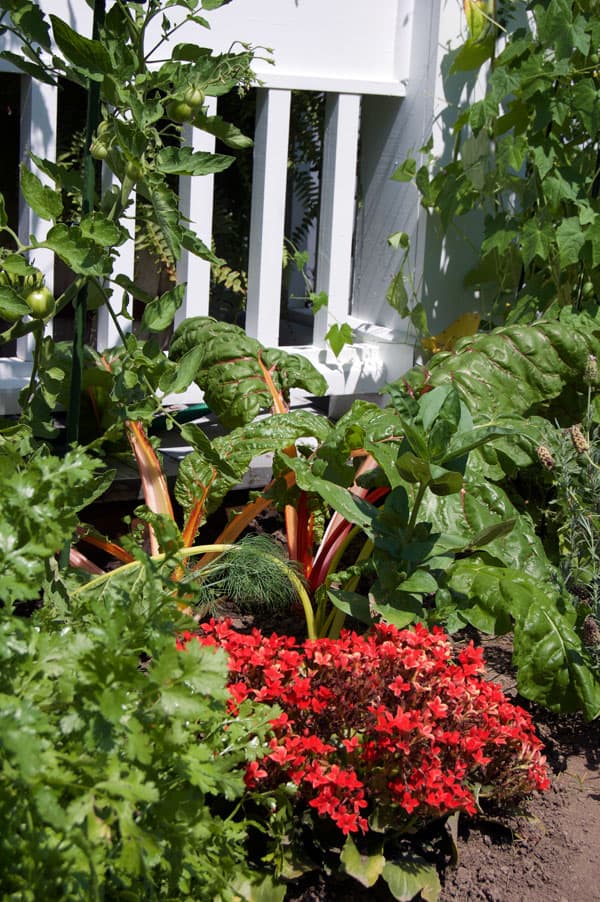 Mixed in with the rainbow Swiss Chard are herbs like cilantro, parsley and low growing flowers like the red kalanchoe. 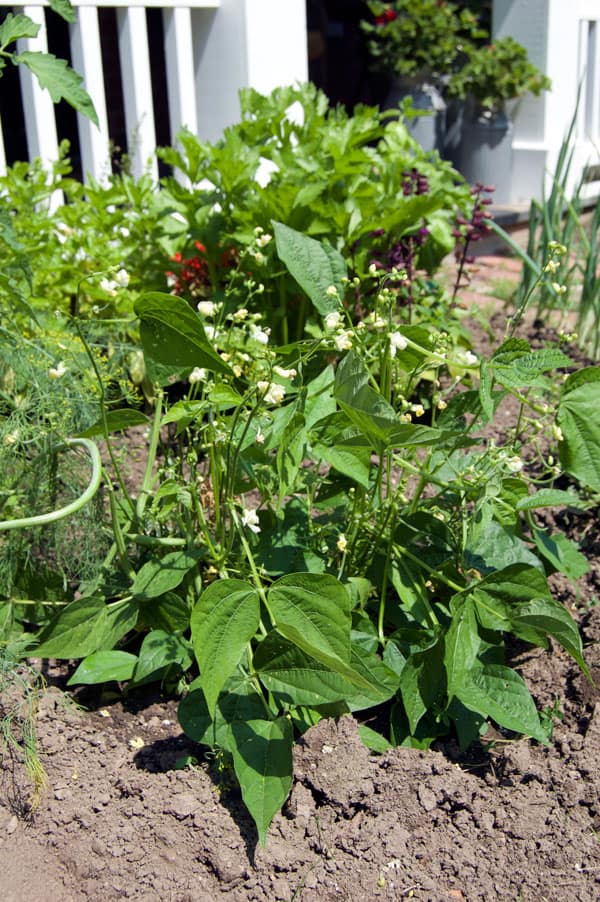 It’s hard to see here but this is the Mascotte green bean I told you about earlier this year.  I wanted to test it out to see whether it was worth growing for anyone who was short on space.  So I threw one into my front had and planted 3 plants at my mother’s house in a pot. 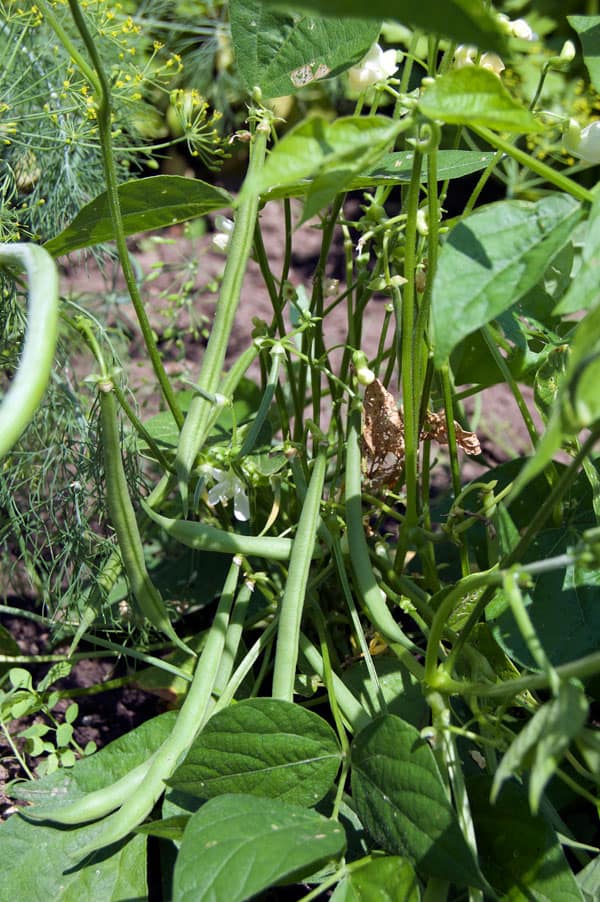 It’s definitely worth it for anyone who can only grow their vegetables in pots or window boxes on an apartment balcony.  These green bean plants are filthy with green beans.  But you need to plant a lot of them.  For a standard window box I’d try to get at least 8-10 plants in there. 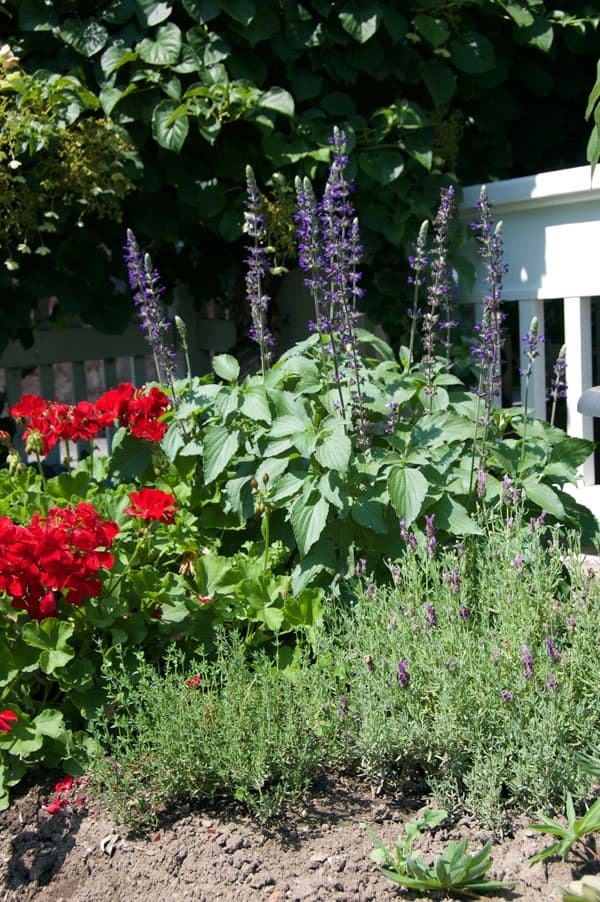 Again, this corner of the garden has a bit of the English Cottage garden feel I want to try to perfect.  Lavender is mixed in with oregano, salvia, geraniums and earlier this year that’s where I had all my lettuces. 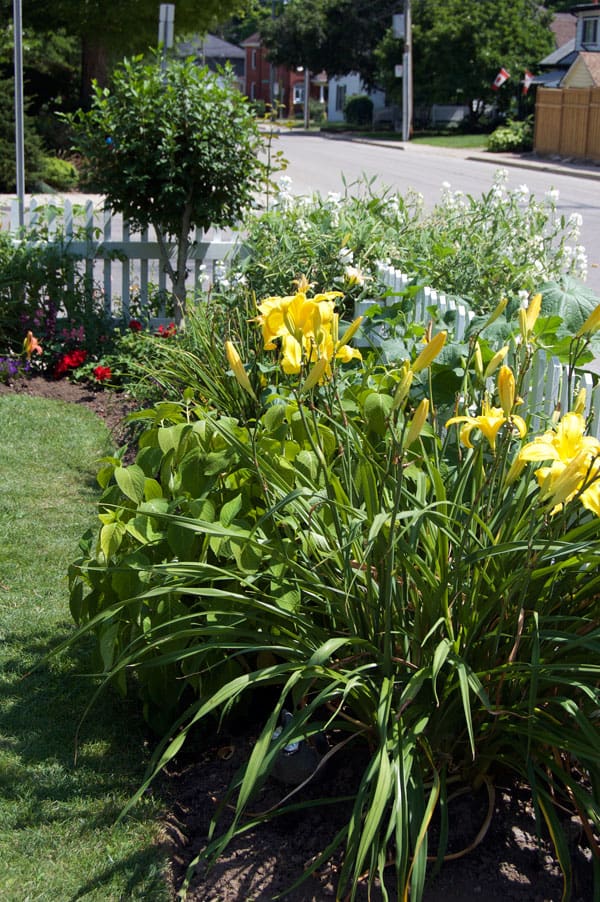 This is my favourite day lily and it’s one of many perennials I’m going to split in the fall to help fill in the front section of the garden in front of the porch.  I’ll also split my phlox, delphiniums and foxglove to plant in the front.  That should help beef things up and give the garden more of an “I’ve been here forever” look as opposed to the “I’m brand new” look it’s sporting now. 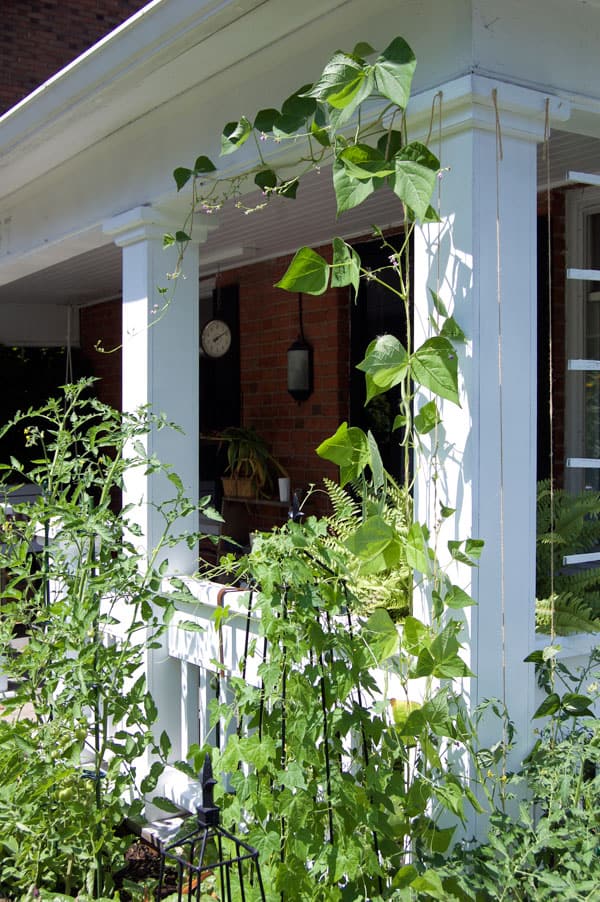 The green beans growing across the porch will stay.  It’s wild enough to look English Cottage garden, without being so wild it looks Grey Gardens. 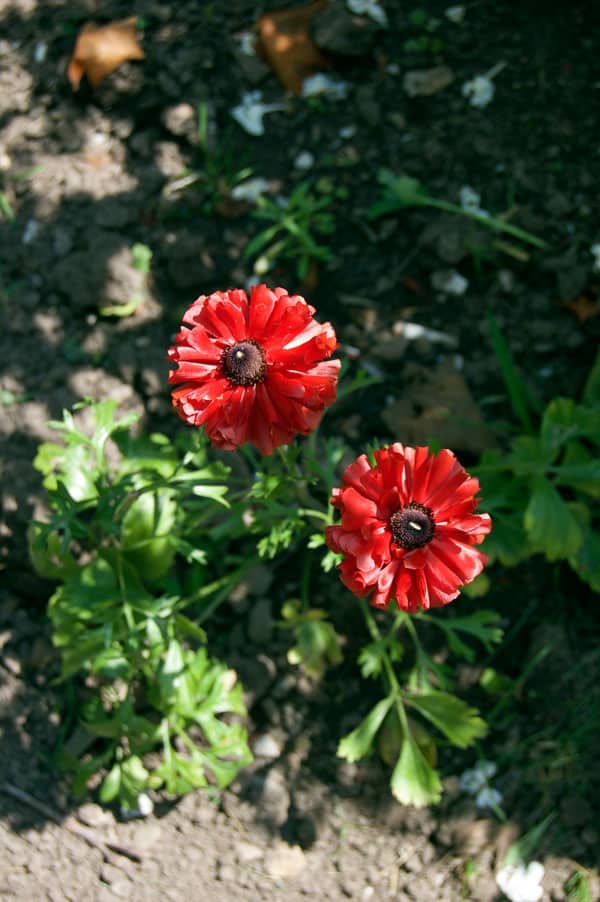 Ranunculus on its last legs. 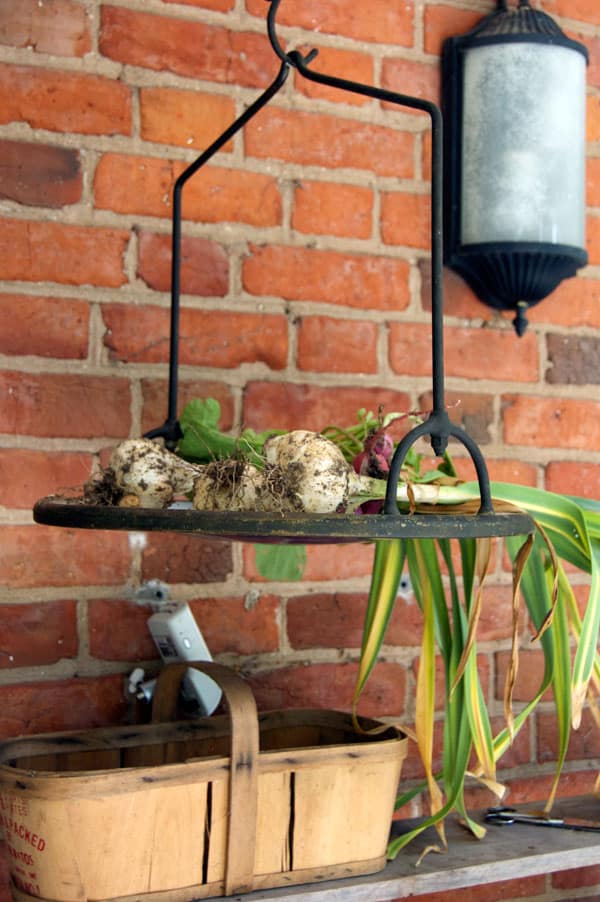 Elephant garlic is not garlic. I didn’t know that.  Did you know that? I always thought elephant garlic was garlic because some idiot called it garlic.  Plus there’s that whole thing where it looks like garlic. But it’s not garlic.  It’s from the onion family.  And yet.  It tastes like mild garlic.

Seriously, someone’s screwing with us here.

The other major thing I’d have to do to make this an English Cottage Garden is to get rid of the straight lines.  No straight lines allowed.

So the front would have to go from something like this … 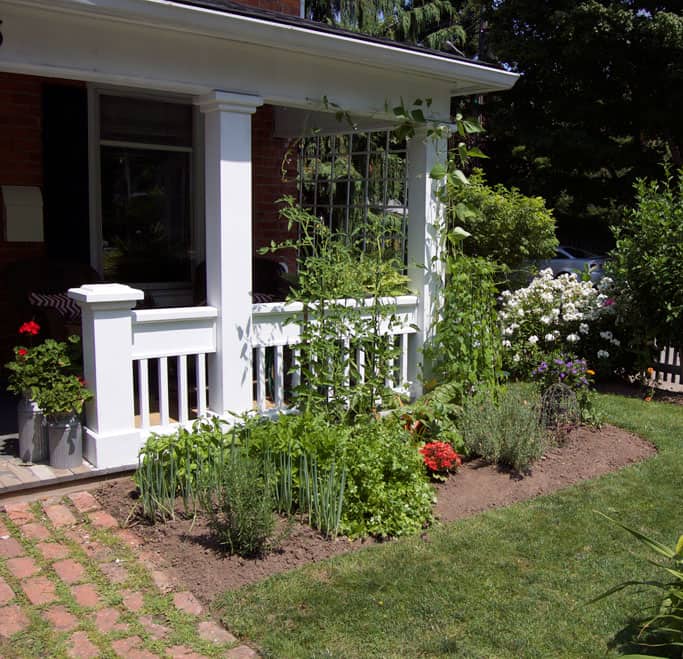 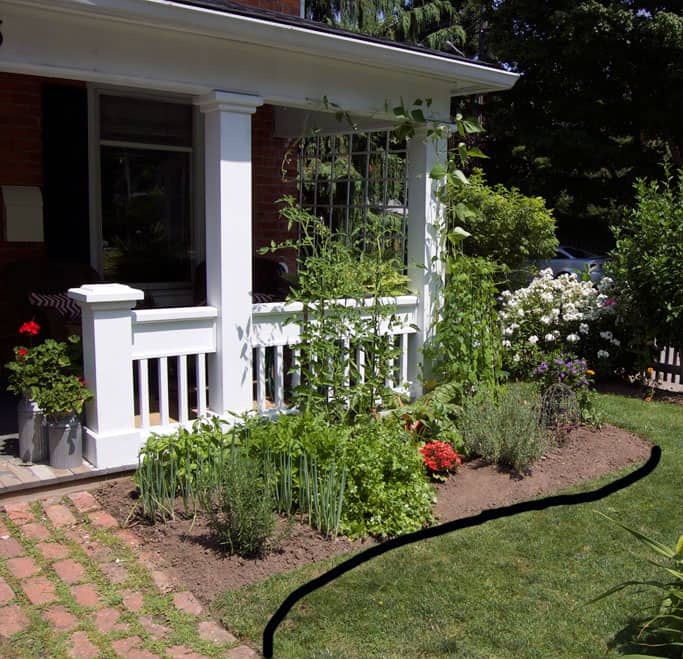 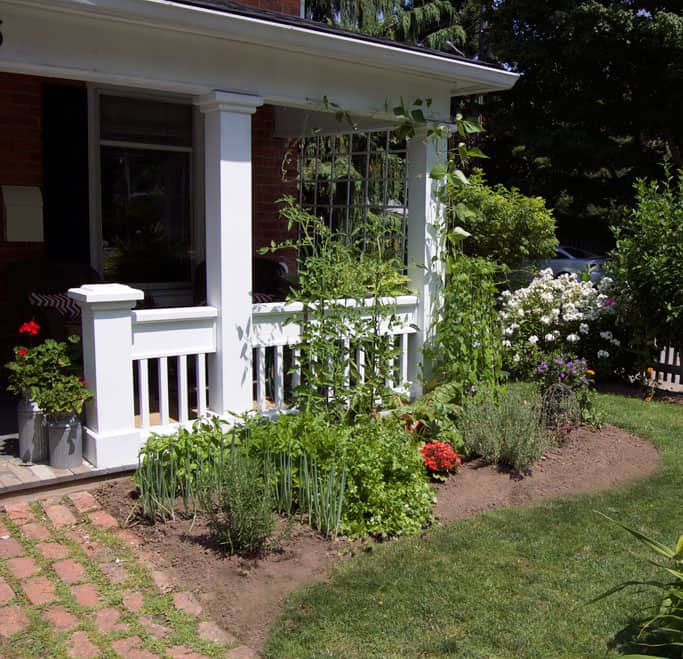 It’s not a huge change but the curving, softer lines are the way it should be.  If you go back up to the nice photo of my side yard at the top you’ll notice part of the reason it’s so nice is because it’s a curved bed, not straight. If I wanted to do a sort of potager/cottage garden feel I could formalize the yard by edging the beds with tiny boxwoods.  The only problem is that tiny boxwoods eventually become huge boxwoods.

So there you have it. An update on this year’s Front Yard Vegetable(less) garden.  To me it seems like so few vegetables when in reality, I mean let’s face it there are a LOT in there.

If you happen to live in England or France and can direct me to a really great book on English Cottage gardens or French potagers feel free to let me know about it in the comments.

Actually, feel free to come and do my garden for me.  I’ll play some Beyonce for you while you’re doing it.