O.K. you have the pumpkin but you’re not good with knives. It has nothing to do with past felonies! You just can’t be bothered to carve a pumpkin. Now what? I have a few ideas for you that’ll have your pumpkin looking great with minimal carving. Sometimes no carving at all.

I used to love carving pumpkins. It’s because when I was working in my former profession as a television host it was one of the few things I got to do in the year that was creative. I know. You think the entertainment business is creative, and it is, but like most businesses, the majority of the creativity is performed by the accountants.

For lowly hosts and writers – well, we just do what the producers ask. And very rarely do they ask you to carve pumpkins or do other types of crafty things. And exactly zero producers ever asked me to build a chicken coop. Assheads.

Not coincidentally my life as an elaborate pumpkin carver stopped when I started growing my own pumpkins.

Carve it up? Peel the skin off and mangle the thing that took me 9 months to grow? Don’t be absurd. You wouldn’t do it to your baby and I won’t do it to mine.

Except, yes, I will eat my baby.

That’s lesson #1 in no carve pumpkins. Grow your own: no matter how much pressure you feel from the neighbourhood pumpkin police, you’ll feel no guilt about protecting what you raised.

Lesson #2 in no carve pumpkins is to grow (or buy) interesting looking pumpkins.

If the pumpkin looks good (in this case a Thai Rai Kaw Tok squash) you don’t need to carve it at all as far as I’m concerned. Nope, it doesn’t glow from within because you haven’t cut the top of its skull off and shoved a candle in it but it doesn’t have to glow from inside – because we are living in the modern age and it can glow from the outside.

In fact, I’m a firm believer that a decorated pumpkin looks just as good (usually better) than a carved one.

Drape the pumpkin with gauzy material, tangle some fairy lights around and you’re rocking the chicest pumpkin on the block – no stabbing, cutting or gut gore necessary.

Plus then you can store and eat the pumpkin.

Those fancy pumpkins you buy from the grocery store or the Pinterest perfect farm where everyone wears plaid, but the Ralph Lauren plaid, not the utilitarian authentic farmer plaid? They’re perfectly edible. All of them.

The big blue ribbed ones are often Jarrahdale, the pinkish deeply pleated ones are Cinderella and the warty pumpkins

In fact all varieties of pumpkins are edible. The traditional big orange pumpkins are technically edible, but they’ll have less flavour and could be stringy or watery. They won’t taste nearly as good as the stranger looking varieties (which are also sometimes squash.)

SEE? This is one of my favourite Halloween decorating displays and nothing is carved. Although looking at the feather boa around the door, I realize it looks too sparse and should really be beefed up a bit.

Now if you absolutely INSIST on carving your pumpkin but don’t have any artistic talent the very first thing I would tell you to do is to carve a classic pumpkin with triangle eyes and a big grin. You can never go wrong with the classics.

But if you don’t think you can even manage that, just cut a hole in your pumpkin, shove something into the hole (something creepy preferably) – and you’re done.

That’s a ceramic skull cookie jar (it’s REALLY REALLY realistic and I should know; in grade 4 I brought a crumbling human skull to school for show and tell.

You can read about that in this post on how much your bookcases say about you. If you click over just to read the email I recently wrote to a boy who was in that grade 4 class it’ll be worth it. I have to stress I actually sent the email and did not let him know it was a joke prior or afterwards.

As you can see there’s nothing unusual to see here. I’m just a regular woman who likes to see doll parts sticking out of pumpkins.

And we’re going to end this no carve pumpkin festival with a final pumpkin that has no carving at all but you do get to stab it.

And that sums up what I like in Halloween decor. It has to be creepy but somehow also beautiful. Like Grey Gardens. Or Tilda Swinton. Or White Trash Marshmallow Salad.

Now if you’ll excuse me I have a very busy day of not hosting television shows to get to. 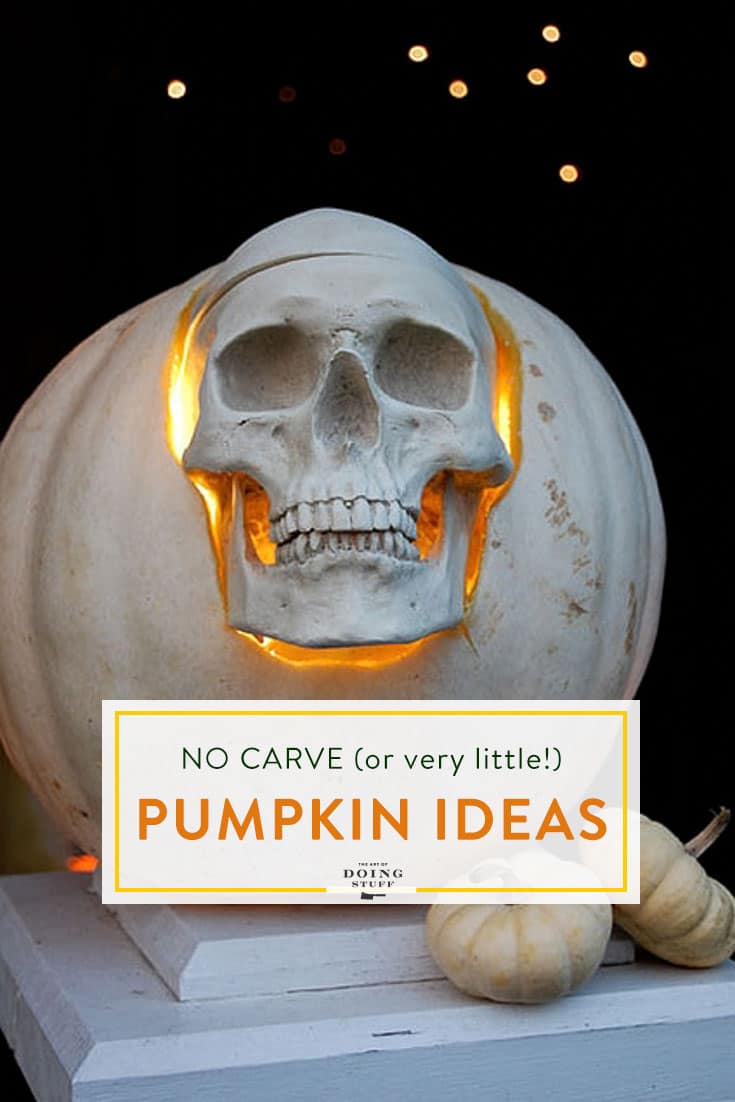