As you may know last weekend was Thanksgiving in Canada. You may know that because a) you're Canadian or b) you read my post a week ago about setting my Thanksgiving dining room table. 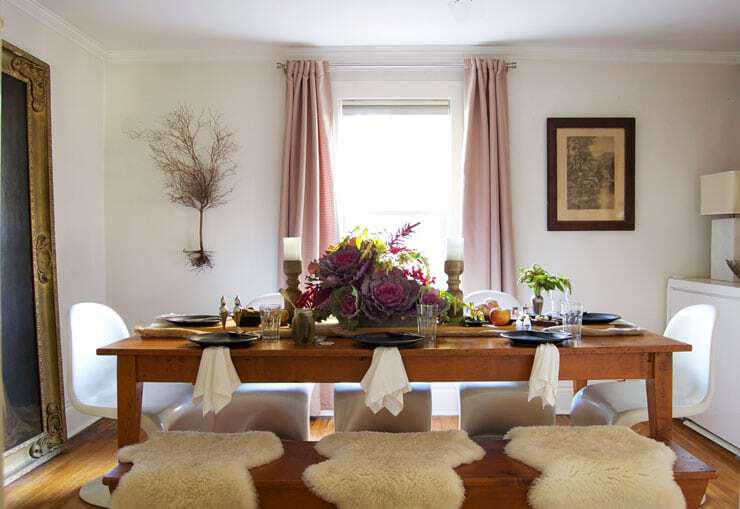 It all looked so idyllic. Like something from a magazine where guests arrived with pies in hand, sipped apple cider and playfully threw straw at each other. There may have been a before dinner game of touch football in the backyard where no one's hair got messy and grass stains and bloody elbows miraculously disappeared immediately.

I think we all know that's not how things went. So I thought it would be a nice treat for all of you to see how Thanksgiving actually went in this series of photos I took the liberty of taking throughout the day.

Because as perfect as the Thanksgiving table looked, that's pretty much where the perfection began and ended.

The night started off like any other Thanksgiving dinner I've ever had, with the guests arriving exactly one hour late claiming starvation. 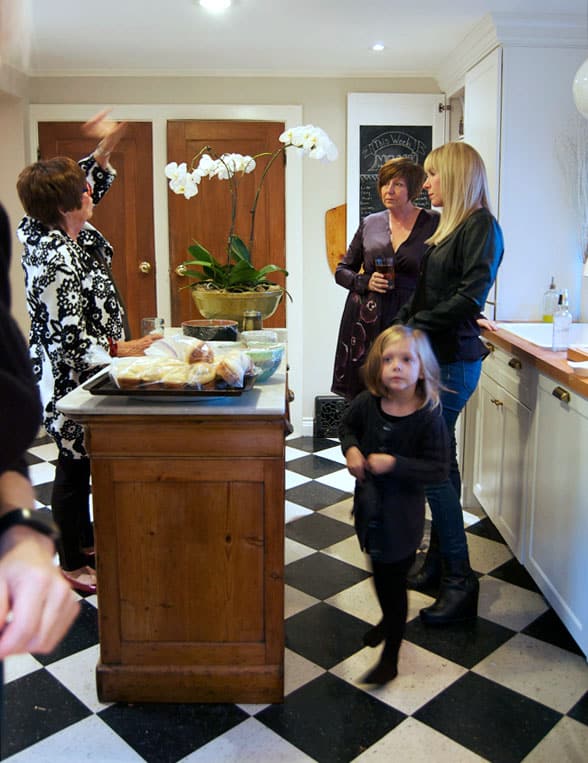 I should probably apologize to them or send out a fruit basket because every room in my house must have been filled with ghosts or entities or a bad smell because without saying why, each and every one of them refused to venture out of the kitchen.  Maybe there were snakes.  The other rooms could have been filled with snakes.  Yeah, I should send out fruit baskets for sure. 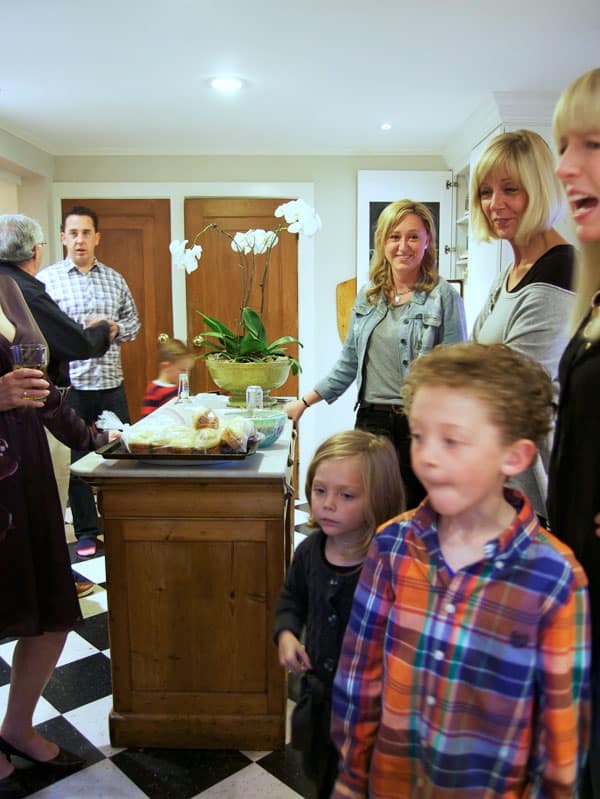 By 7 o'clock the buffet was served even though it wasn't a buffet. 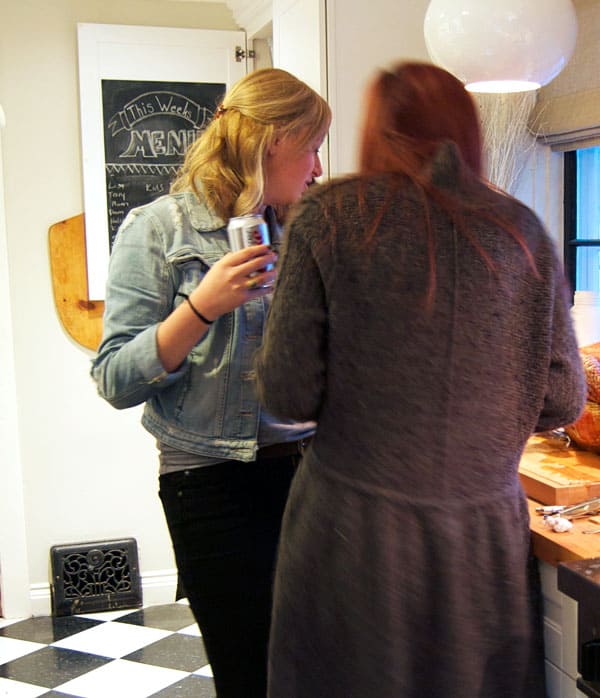 Like a pack of snarling jackals, guests were clawing their way to the carcass, quickly turning on each other in an attempt to show their dominance.  Soon the pack had been thinned out, all of them terrified to get in the way of the sharp toothed head of the pack ... 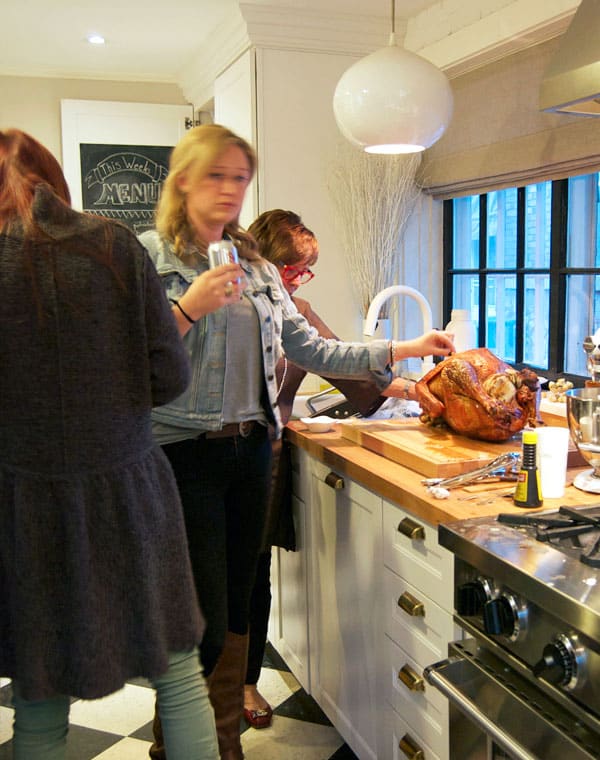 … Betty.  The most courageous, dangerous and martini filled of all the jackals. 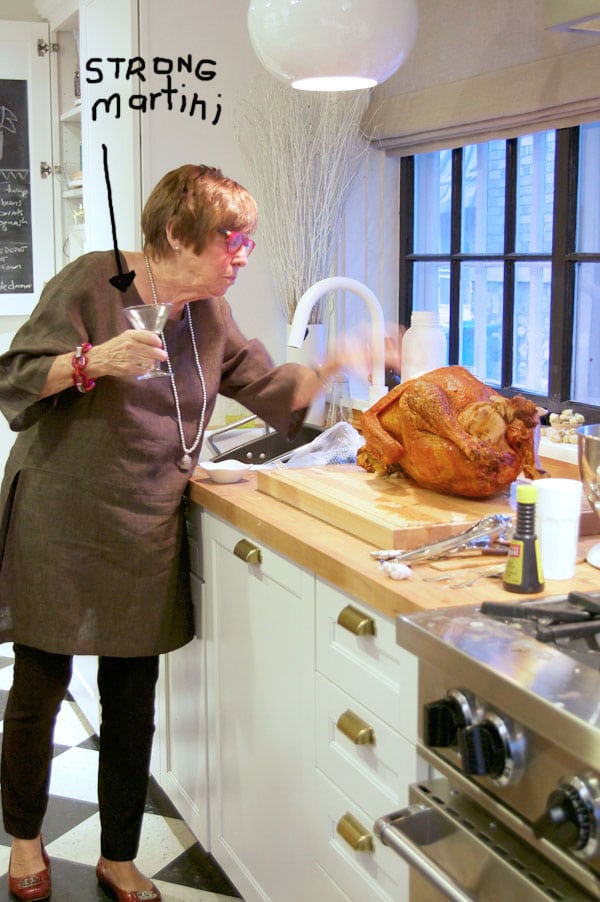 Within seconds all the others had left the kitchen, presumably to feed on whatever else they could scavenge in the other rooms.  Snakes probably. 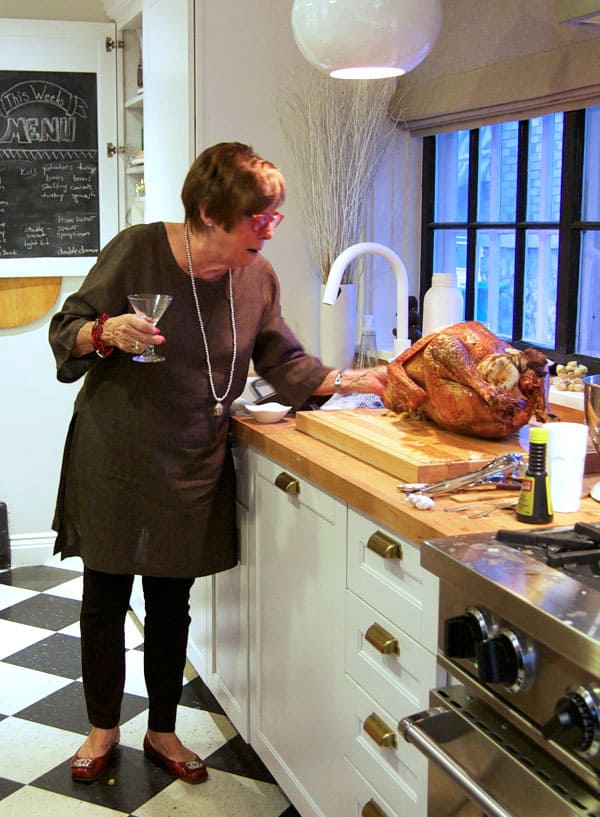 Feeling safer with the other animals at bay, the Betty, put her martini down.  This allowed her the use of both her paws for tearing at the turkey skin. 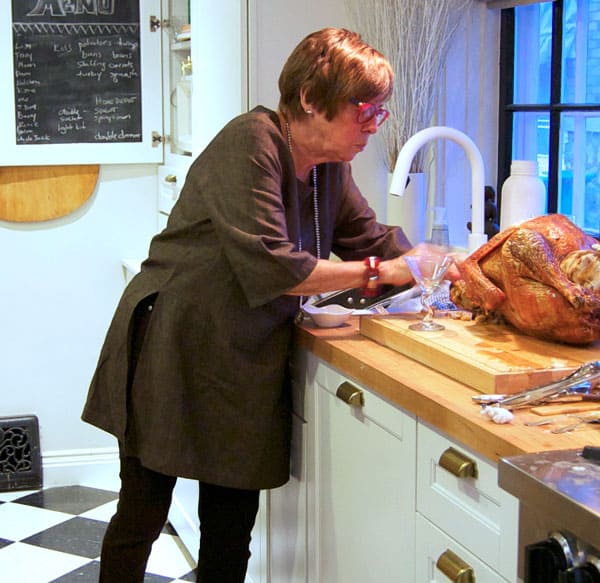 Armed again with the martini and a fistful of carnage, the Betty becomes visibly more sedate and approachable, slinking out of the room to devour her prey in the dark corner of a room. 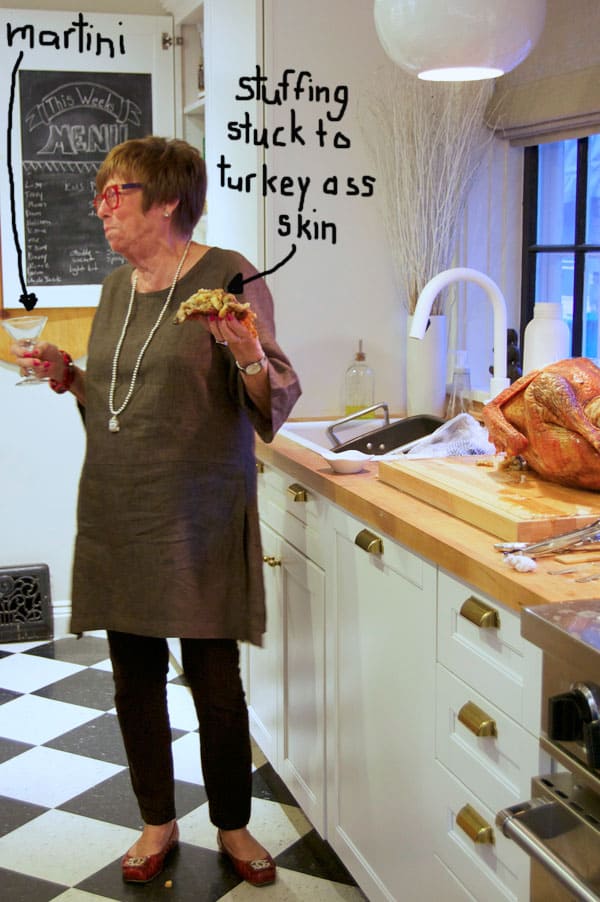 Several hours late and 2 guests short (they arrived near the end of the meal) it was on.  The free for all of eating, scarfing, snorting and laughing.  It was around this time that the kids spilled chocolate milk all over their table, which I was wise enough to cover with a pure white, antique linen tablecloth.  'Cause I'm smart like that.

As you can see, by the time dinner came around I couldn't even be bothered to put the mashed potatoes in a bowl. They got served in the pot they were cooked in, just out of reach of the Betty, who you can see is eyeing them proprietarily. 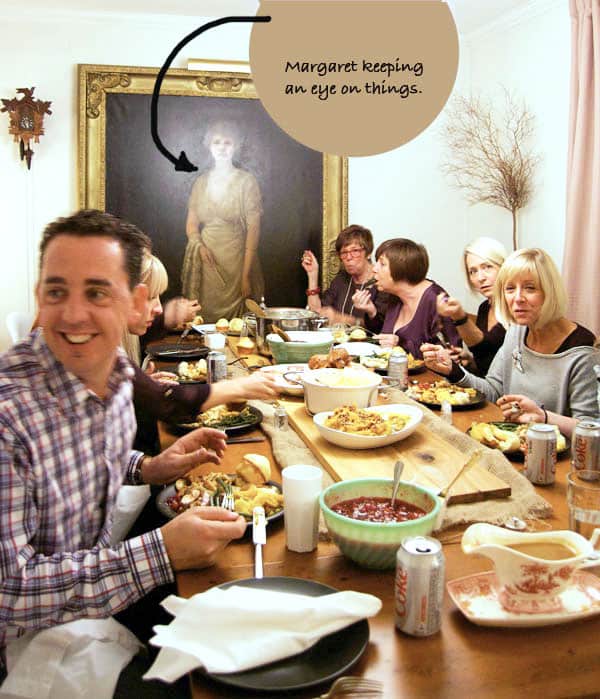 After dinner some guests stayed at the dining room table while other wandered into the living room to watch the hockey game even though I hid the remote control.  I do that every year so no one will watch television.  Every year they find it.  They're like raccoons.

Found this in my laundry closet.  No idea how or why.  Once I realized it was the roasting pan from the turkey it all made a little more sense. My family was insane. 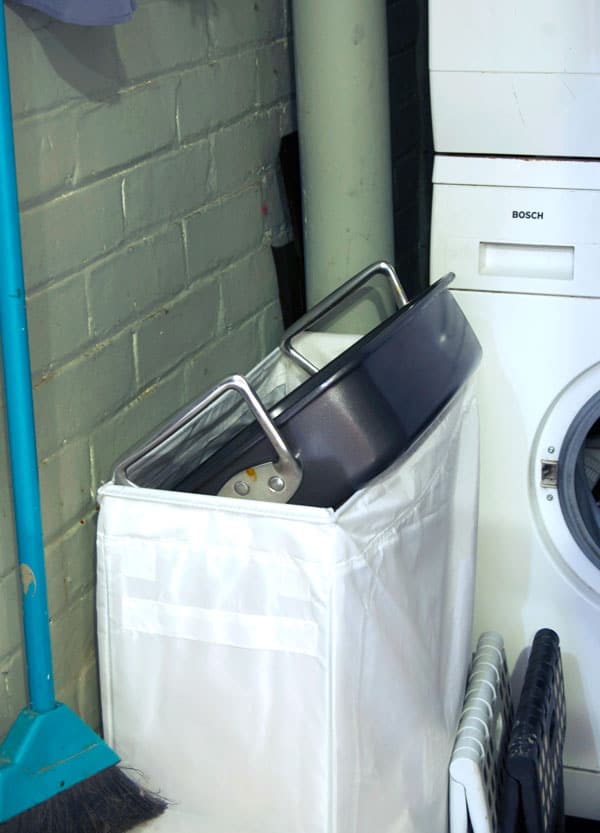 Here's a quick timeline of how everything went down this Thanksgiving of 2014.

4:30 p.m. - It's a beautiful sunny day with a slight chill in the air.  Light a fire in the pizza oven outside for everyone to sit around with snacks prior to dinner.

5:00 p.m. - Stand at door with smile plastered on anticipating the arrival of guests at scheduled time.

5:59 p.m. - Guests arrive, blow past the beautiful outdoor fire, head into the kitchen and set up some sort of family refugee camp around the cooked turkey.

6:02 p.m. - Bikram Yoga niece is writhing on the floor itching, coughing and oozing.  Eyes are watering, mascara is running, head seems to have swollen to a bizarre proportion.  In a turn of luck, only the exposed portions of her skin are covered in hives.

6:23 p.m. - Get punched in the vagina by one of the children.  Overall the night includes approximately 5 vagina punches.

7:00 p.m. - Roll Bikram Yoga niece over and drop some nuts into her mouth in a gesture of goodwill.  Since she's lost most of her motor skills, proceed to hold her chin and slam it up and down to mimic chewing, then rub her throat to help her swallow.

8:00 p.m. - Realize I forgot to put the radishes out during dinner and try to push them on people during the dessert portion of the evening.

8:15 - midnight - I have no idea what happened during this portion of the evening because I was stuck in a constant state of yawn, which resulted in my eyes being closed for 4 hours.

Midnight - The last guests shuffle out the door with leftover pie and a handful of radishes.

12:20 a.m. - Smash all the perishable food into the fridge and decide to worry about the mess in the morning.  Tired.  Exhausted.  So very tired.  Go upstairs.  Find my favourite, cozy pajamas, dim the lights and …

12:26 a.m. -  Strip the bed, throw the vomitty sheets in the washing machine (that's when I discovered the roasting pan in my laundry hamper), put new sheets on the bed,  grab a cookie from downstairs, step over a ball of wheezing that I assume is Bikram Yoga niece, lay down and go to bed.

I'm writing this post from my bed, which I hope to get out of just in time for Christmas dinner.  Which will be at my sister's house.