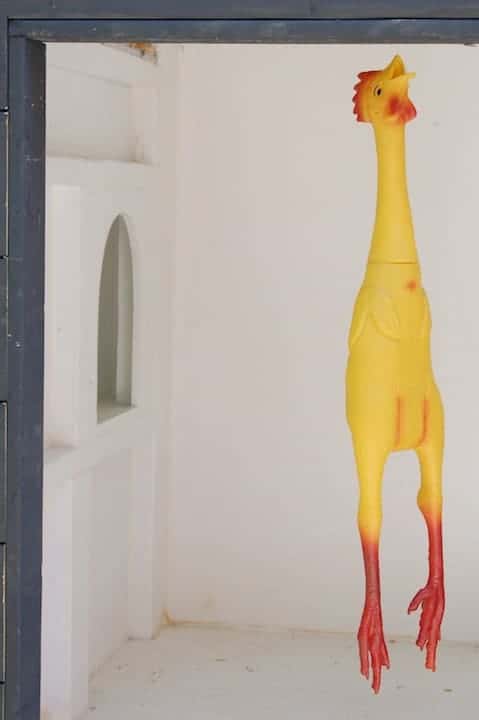 Now let me tell you a little something about that rubber chicken.  In telling the tale of the rubber chicken, you will learn an infinite amount about the family from which I come.

The fella and I have photography class every Wednesday night.  We get home around 10, he scurries off to bed and I make the rounds making sure the chickens are locked up in their temporary pen, the tools are put away, there's cold Diet Coke in the fridge.  You know.  All the important stuff.

I squawked.  And one of my boobs made a foul poop.  Suffice it to say the funny rubber chicken you're seeing right here is not so funny at 11:00 p.m. by the light of the moon, in a quiet residential neighbourhood.  It's quite ominous in fact.  Think horse head in a bed.

My first thought was Someone doesn't like me having these chickens. My second thought was That's one of the funniest things I've ever seen. It's easy to immediately go for the threatening thought when it's dark out and you're alone and you need a Diet Coke.

Then my senses kicked in and I realized it was a joke.  And the sort of joke one of my family members would pull.

My maternal grandmother used to catch rats in her basement, put them in a shoe box, wrap it up pretty and then leave it on her front lawn.  She would sit in her front window watching, waiting for someone to come by, pick up the present and walk away with it.   At which point, she was scream with laughter.  See? Weird.  But weird with a sense of humour!

So by method of weirdo deduction,  the big foam finger pointed right at my mother.

The next morning I called my mother and asked her about it.  She laughed for a full 10 minutes and then said.  Chicken?  What chicken? Hmm.

Luckily for me this particular genetic peculiarity doesn't skip a generation.

I'm inviting my mother for dinner tomorrow night.  And as a special treat we're going to have  potatoes, salad, corn on the cob and Chicken?  What chicken?