Home » HOME stuff » THE BACKYARD 2017. GETTING CLOSER TO PERFECT.

THE BACKYARD 2017. GETTING CLOSER TO PERFECT. 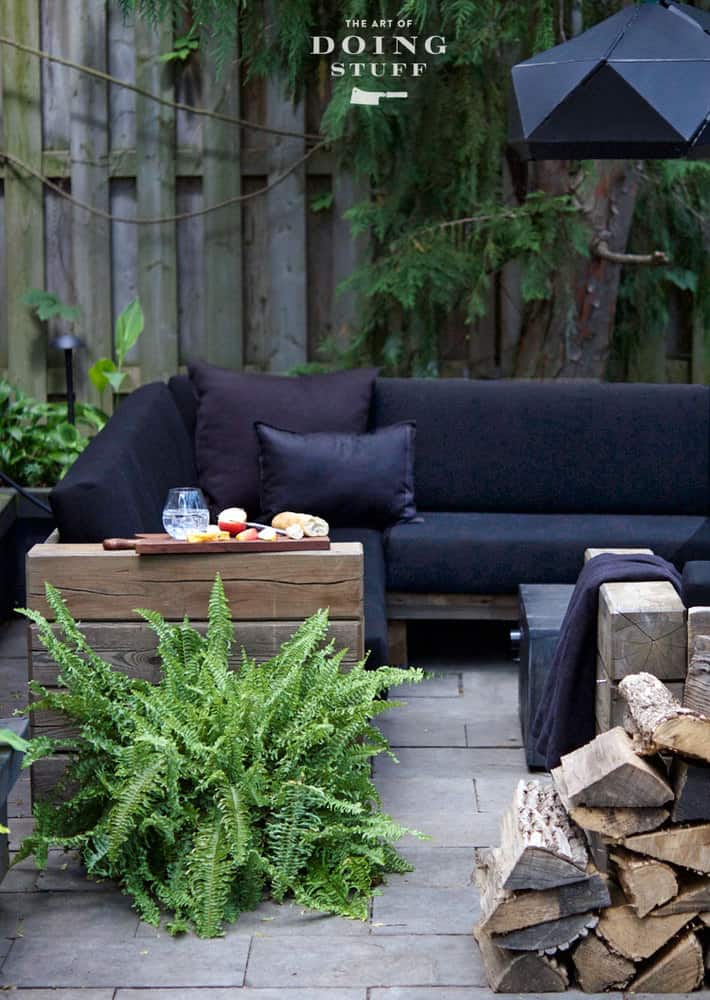 After 17 or so years of working on my backyard I think I’m finally happy.  Not with the backyard you understand, just happy in general. Which makes me far more tolerant of the things in my backyard which make me nuts.  Like the lack of storage, my possibly dying maple tree and the hellish mosquitos that have not only bit me, but bit my feet while resting on either side of a massive, potted citronella plant. Having said that, as the saying goes, this is the closest to being happy with my backyard as I’ve ever been.  There’s one more thing that would really make my backyard happiness complete and I’ll get into that later in the post. 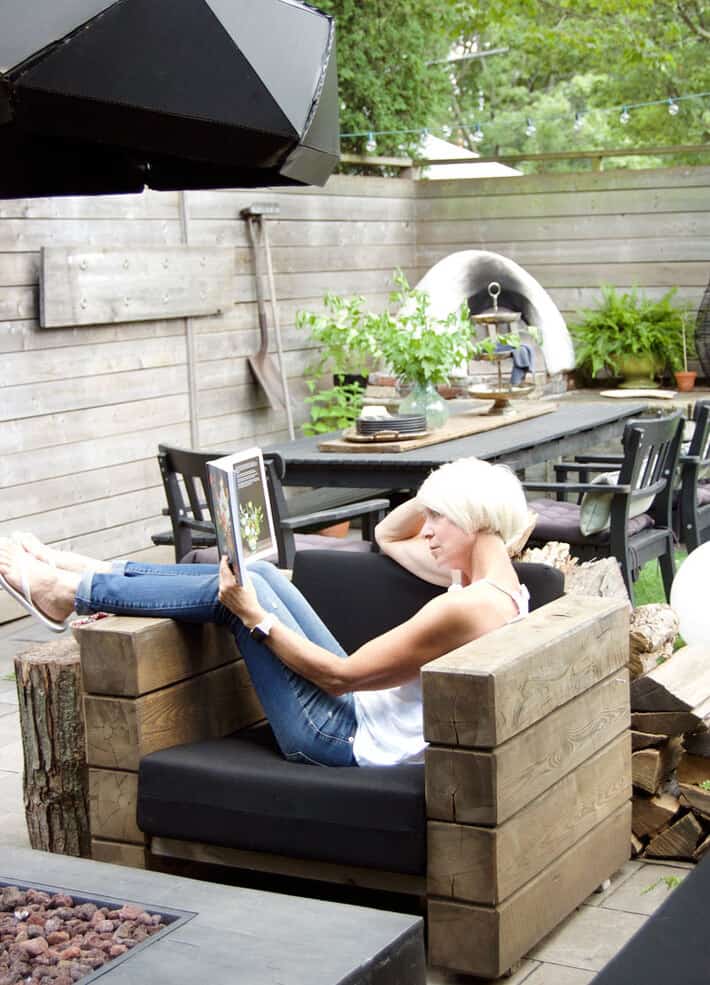 So here I am in my Restoration Hardware hacked chair pretending to read a book.  It’s a great book actually and I have read it, but I’m not really reading it here.  I’m pretending to read it.  It’s a fantastic floral design book called The Flower Recipe Book.  Very looks, Brooklyn style arrangements.  I also have The Plant Recipe Book which is similar but with plants as opposed to flowers.  Both are on sale now. 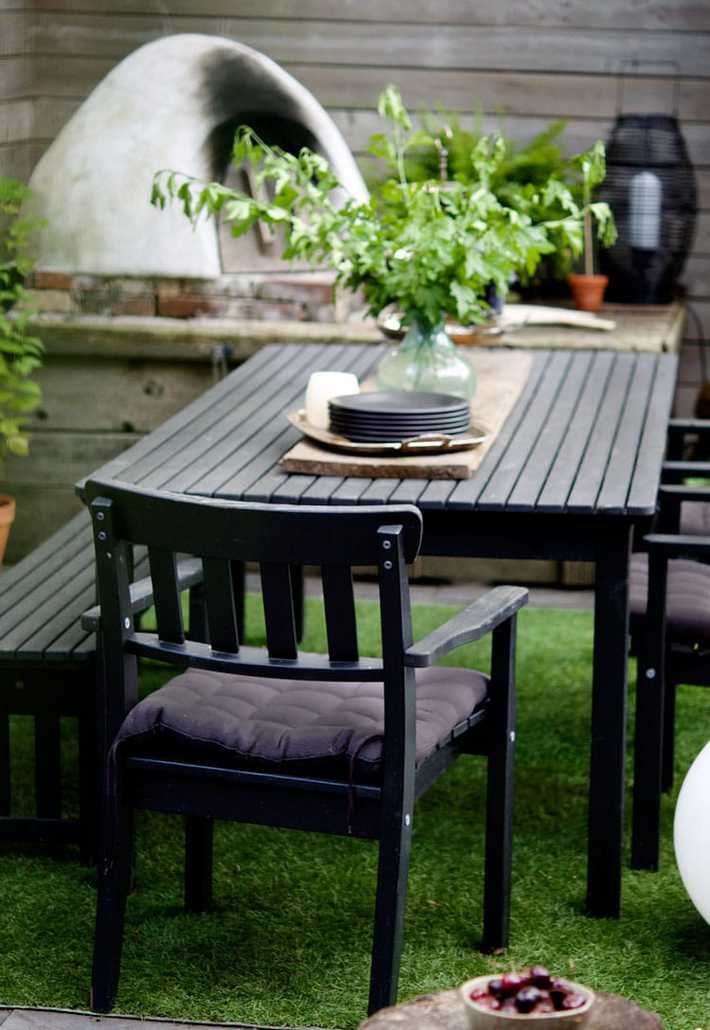 Last year I had my Restoration Hardware Furniture Hack beside the pizza oven which I LOVED because it was so cozy, but when I had pizza I had to walk it over to the other side of the backyard to slide it onto the table.  It didn’t make sense.  In the winter when I had my 8 cords of wood delivered I had to move the furniture from around the pizza oven to make room for wood stacking.  At the time my sister helped me drag the furniture over to where the dining table was and in the spring I decided it would make more sense to just leave it there and put the table by the pizza oven. 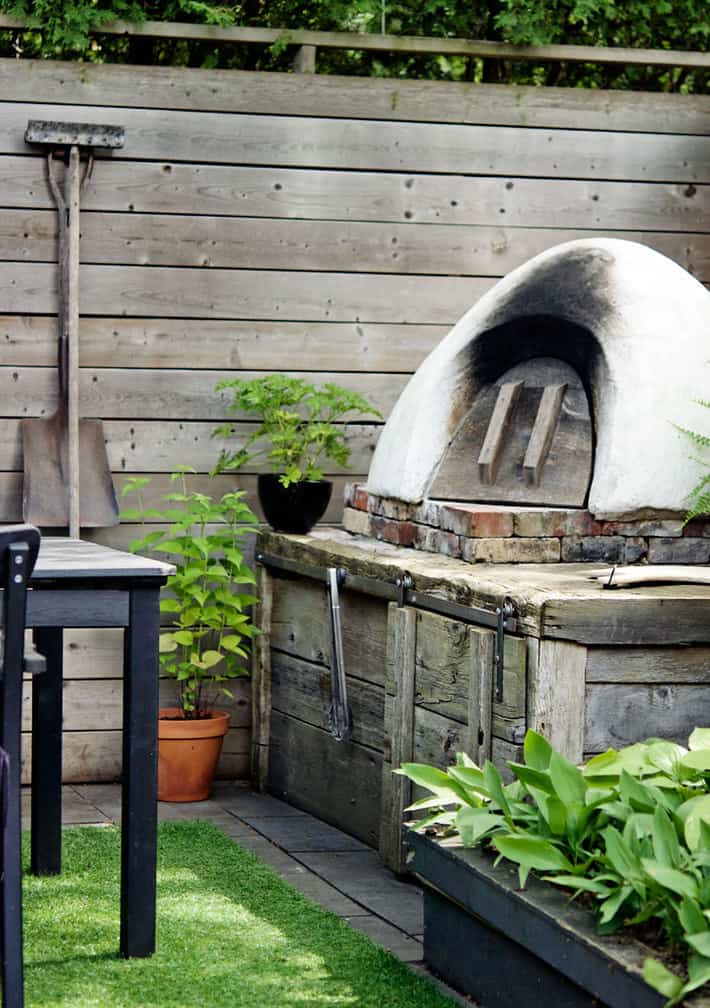 Still the best thing I’ve ever done for my backyard was build the pizza oven. It not only saved me a TON of money (like thousands) by building it myself, it’s created a reason for me to be outside and a reason for people to come over.  EVERYONE who comes wants to come over for pizza.  Everyone.  If you want to build your own pizza oven for about $100, start here. 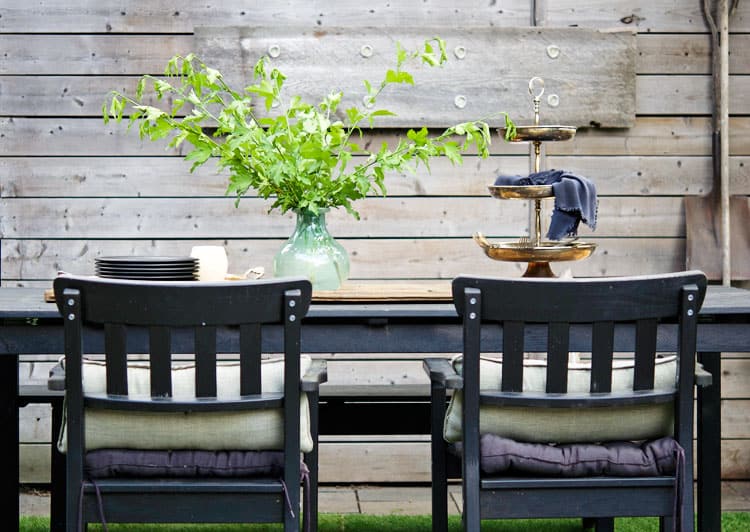 My outdoor dining table and chairs were from Ikea and they feel like regular furniture which is what I like about them.  It’s nice to have something outside that you like enough you could have it inside.  I mean, I wouldn’t but … I could. 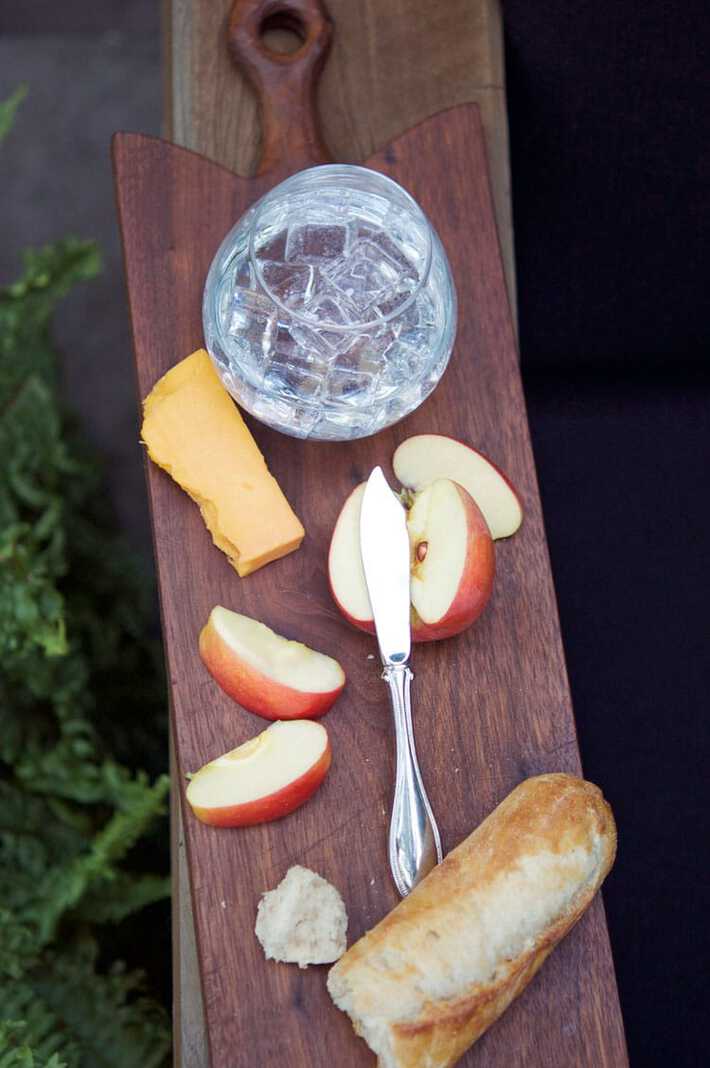 Those ice-cubes are fake.  For real.  They’re plastic ice cubes.  If you shoot anything outside in the summer your ice-cubes are gonna melt quick-like.  Buy fake ones and they’ll never melt. 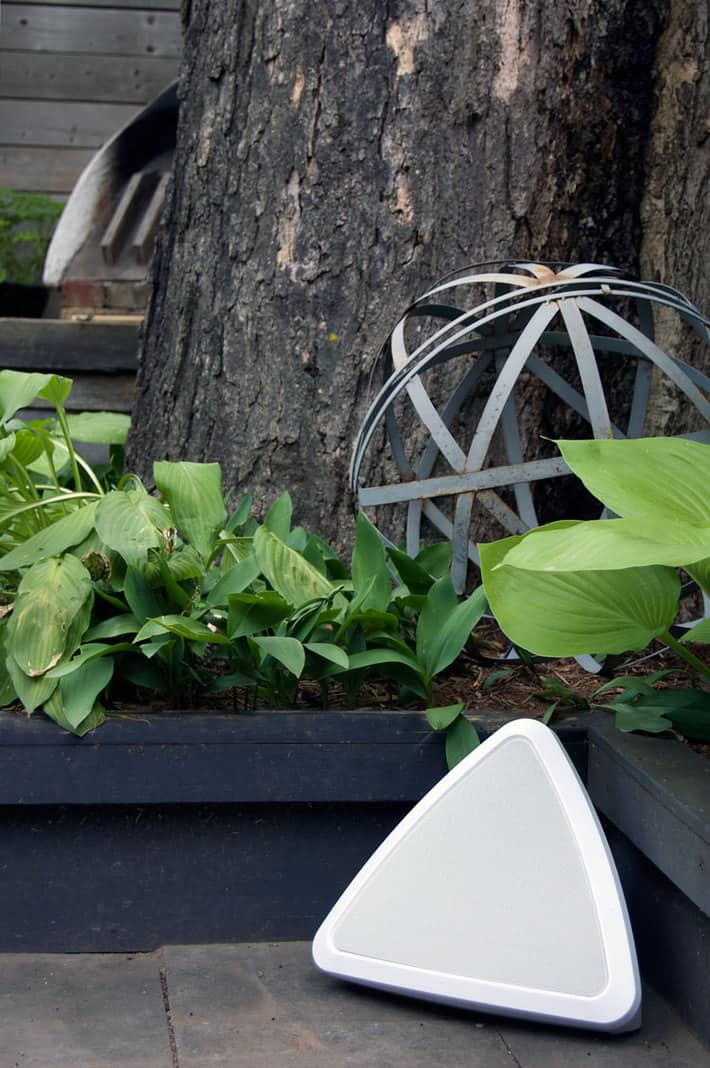 You know those sales racks they have right at the check out in stores? That’s where I found this speaker.  I wouldn’t say it’s the loudest speaker I’ve ever owned but it’s great for the backyard because it’s bluetooth, has a rechargeable battery so I can set it down anywhere without plugging it in and it’s waterproof  .  It’s called a Cornerstone if you want one.  You can also get two and they’ll pair to each other and create stereo sound.  Get ’em here if you’re in the States. If you’re in Canada, the only place I can find that carries them is The Source. 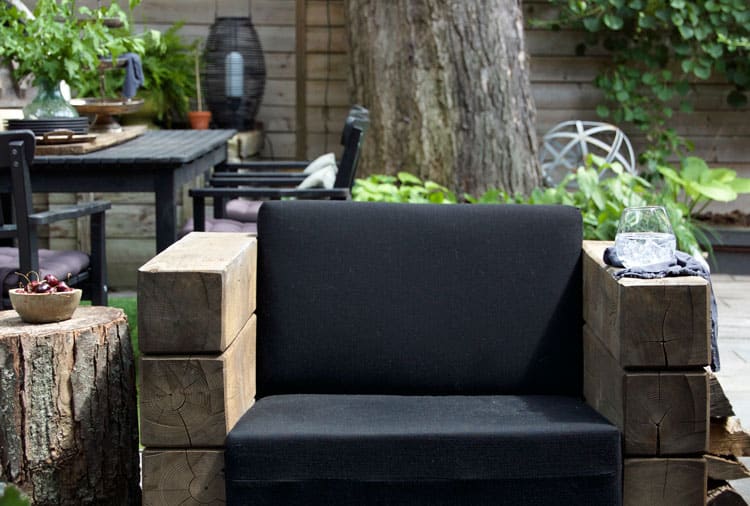 The light fixture you see hanging in the picture below is a prototype I made using corrugated plastic.  I based it on a cardboard light I got at Ikea that obviously wasn’t going to stand up to the elements outside.  Although, like an idiot I did try.  It’s made by cutting the plastic into shapes and then scoring it so it bends. It worked well but I need to make another one that’s a tad neater.  I’ll never do it.  But let’s pretend. 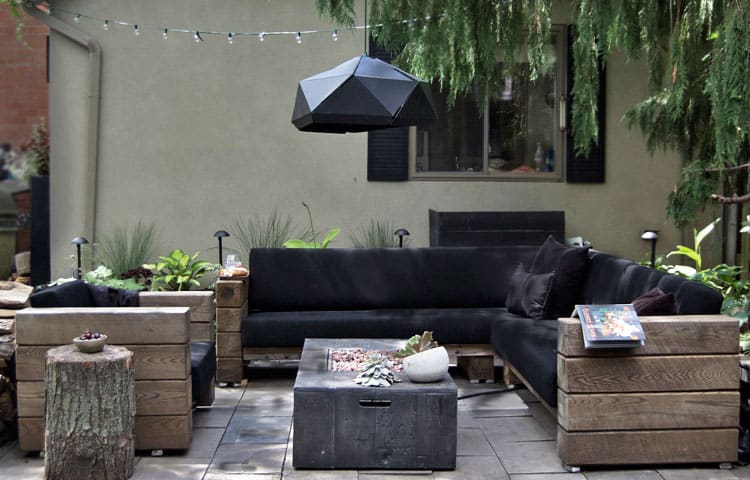 Some time last winter I bought the fire table that sits between my chair and sectional.  The manufacturer was coming out with new styles and Rona was selling off all the old stock for almost free. I think this was about $180 regular price around $1,000.  For now I have it hooked up to a propane tank. Once I’m sure I’ve completely committed to having the sectional in this area of the yard I’ll have a gas line permanently run to it.

Hey! There’s that book I’m pretending to read hanging over the arm of the sectional.  I really commit to my lies. 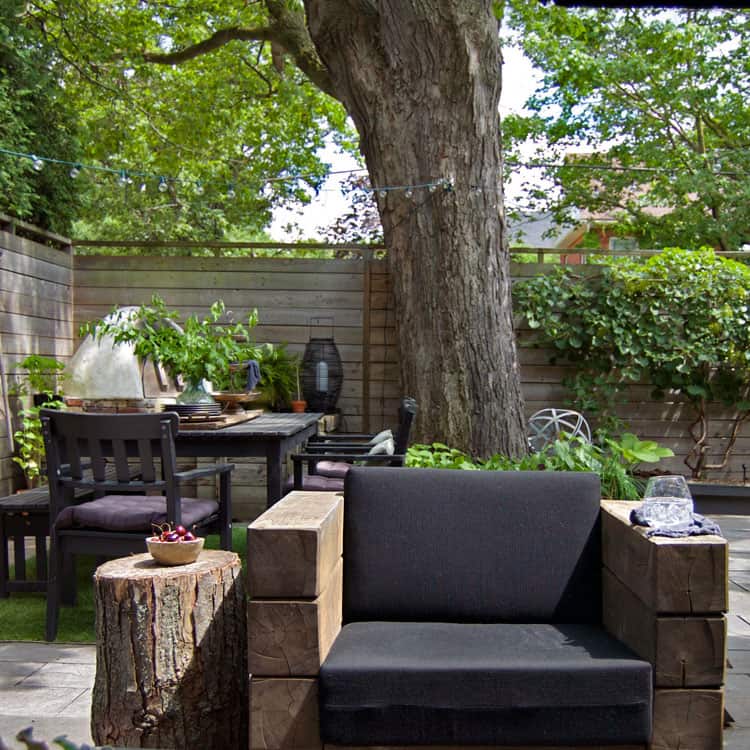 I know and I understand that I’ve been saying for almost a year now that I’ll be doing a post on how I built my Restoration Hardware furniture.  I have not yet done that.  Here’s the thing.  I don’t use plans, I don’t even know how to read them. I just build stuff.  I make it to fit me and my yard or house.  So when people ask me how wide or deep the chair is I can tell them, but that’s been built for me.  Not someone who is 6′ tall.  That’s half the advantage to building your own furniture, you can make it the size that feels right to you.

I haven’t abandoned the idea of writing up a post on the basics of how to do this furniture but it’s definitely something I keep putting off.  Sorry about that. 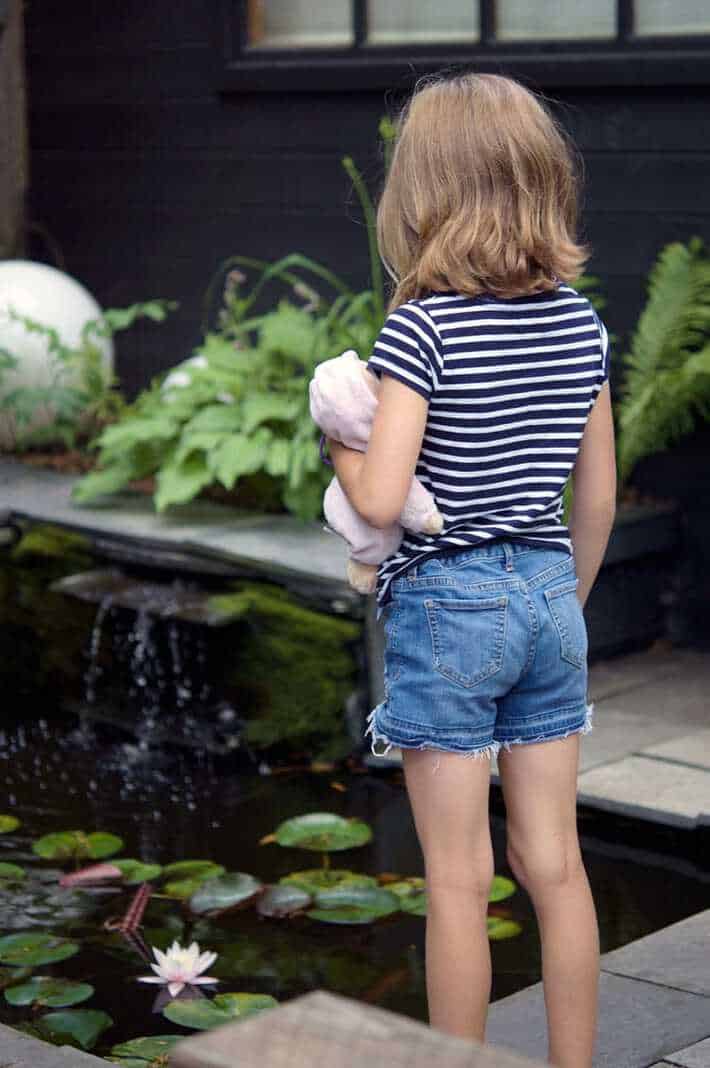 The fish are really easy to take care of  until they get a weird disease that eats their flesh to the point that you can see their internal organs. Then it’s a real shitshow.   If you haven’t read my post on how I treated my fish that had gaping holes in their sides you really should just for the before and after photos.  Big. Gaping. Holes.  You could see their insides! 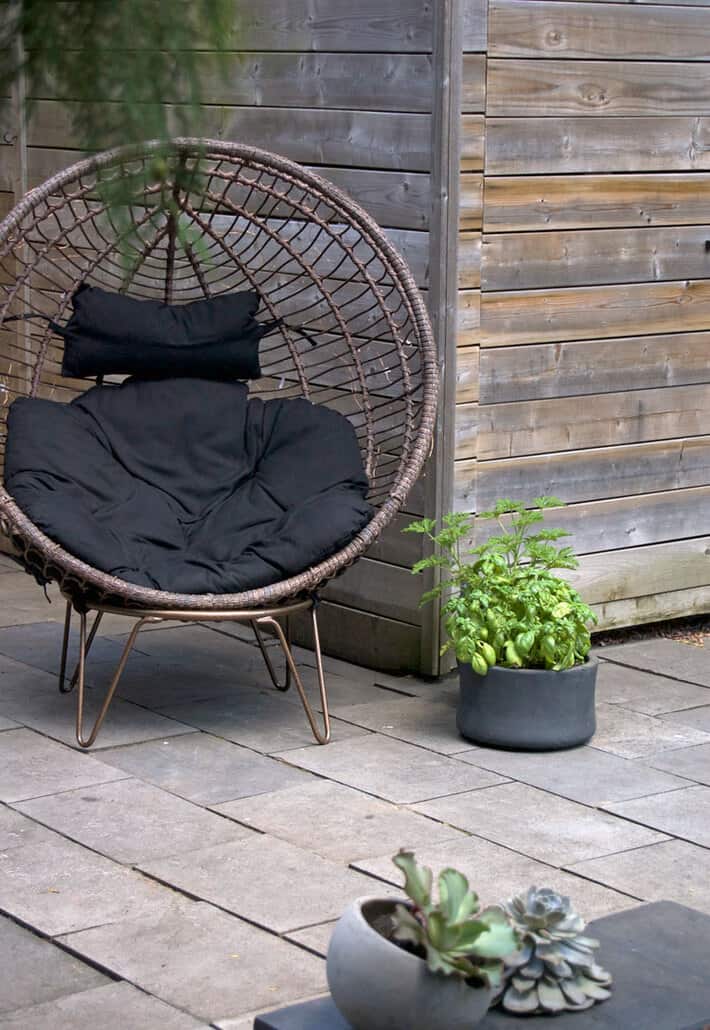 Most of you know the story behind THAT chair.  For those of you who don’t, read all about it.  It’s the reason the word fiasco was invented. 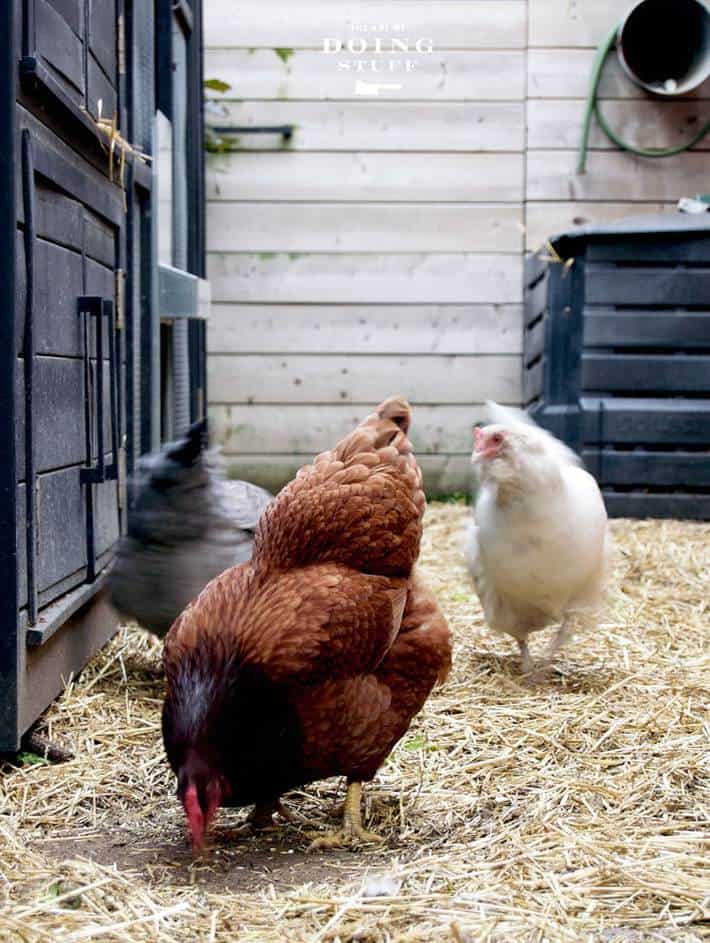 Yeah.  I still have them. And they’re still cute.

Before I let you go we’re going to take a nighttime tour, if you have time for that.  Come on in the back gate … 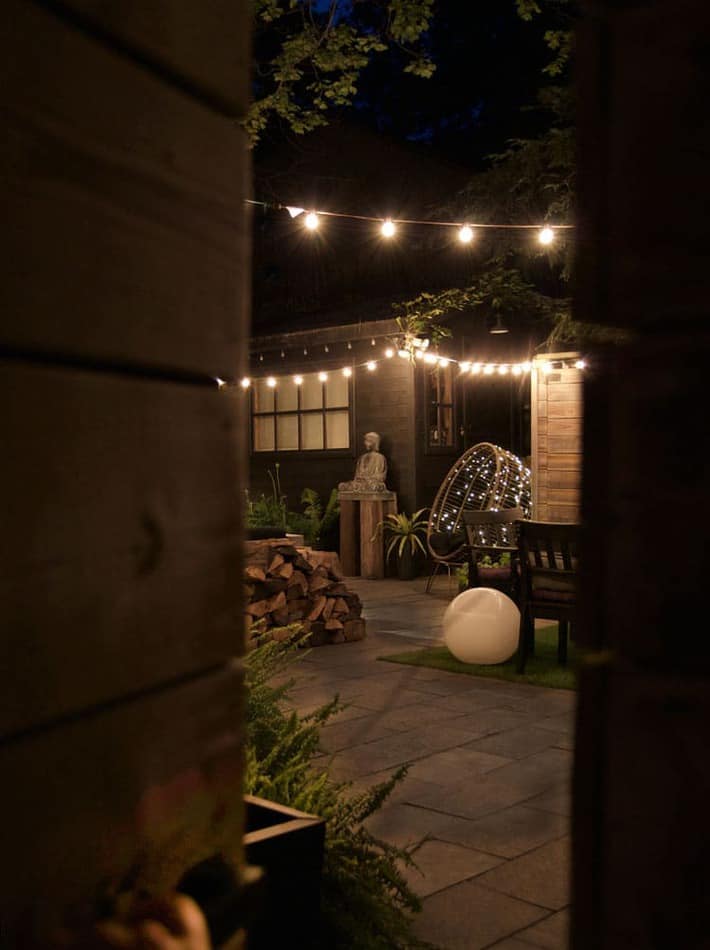 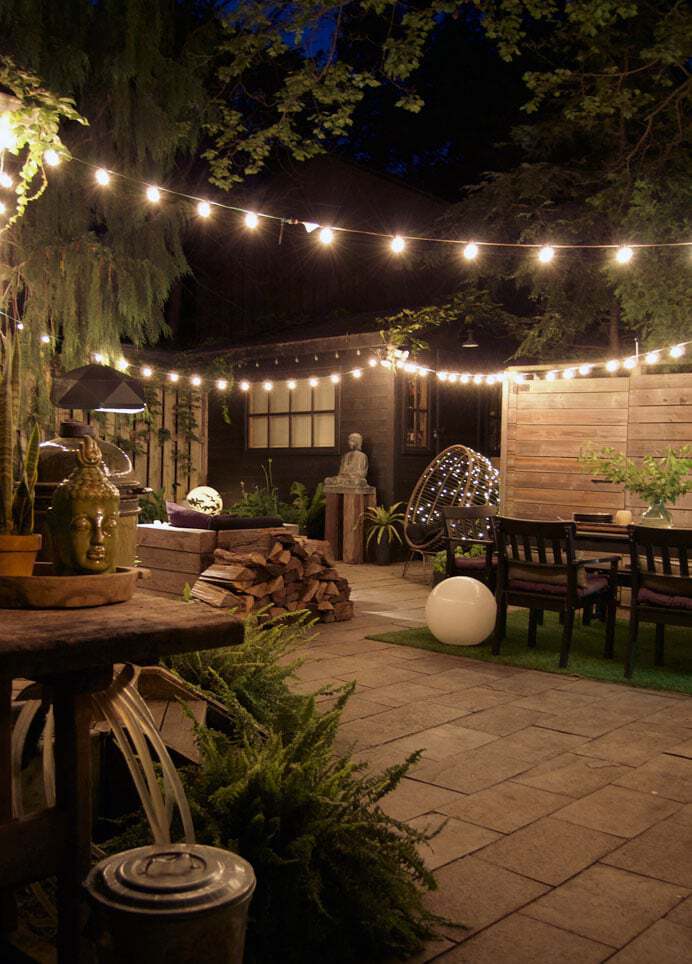 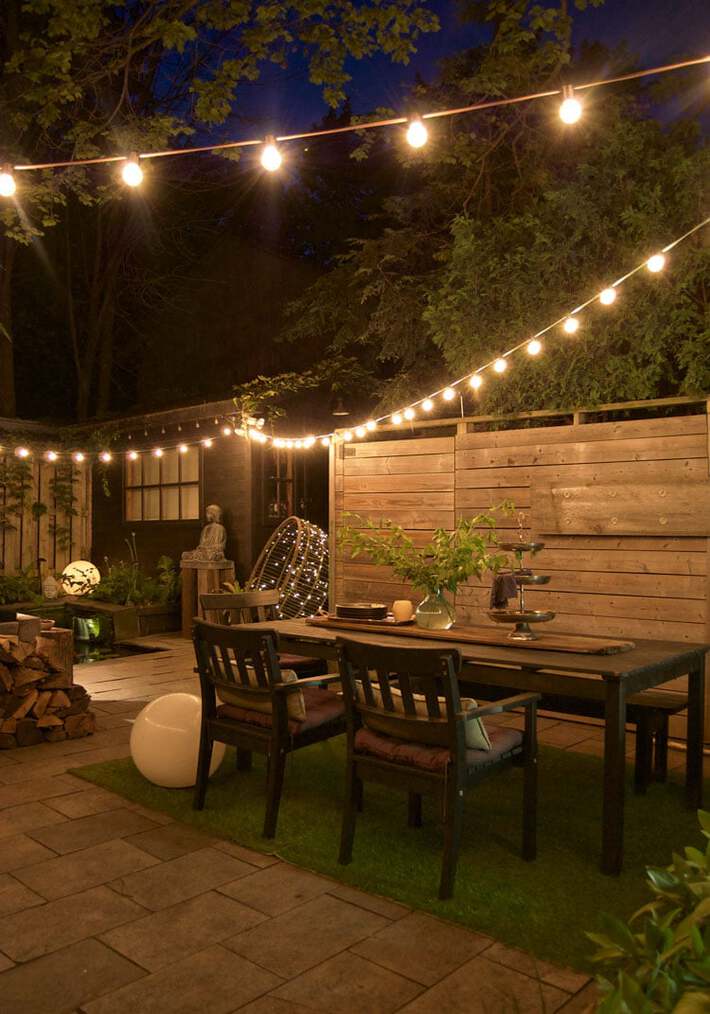 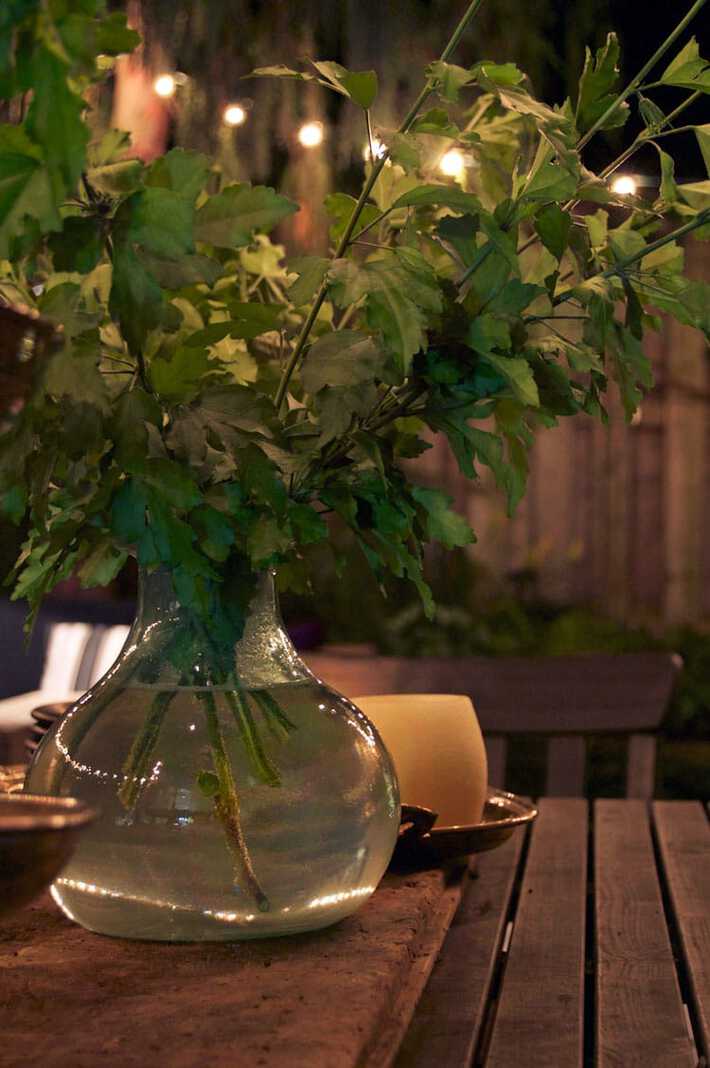 Can you imagine this backyard at night without the lights?  Probably not.  Or else you could but it wouldn’t be nearly as nice or, more importantly, useful.  I can go in my backyard any night and do anything I could do in the day.  I can see well enough to BBQ, eat or read if I want to.  Mainly I watch the Blue Jays on my laptop.

Remember at the beginning of this post I said there was one thing that would make my backyard closer to perfect? It’s a pergola.  A big, modern pergola with straight lines, stained black off the back of my house.  It hasn’t happened yet but I’m leaning in that direction.   Leaning very hard.  I wouldn’t hire anyone to do it.  That’d just be stupid.  But I won’t build it myself either.  That’d be just stupid.

I’ll hopefully be able to convince a few friends to help me and maybe they’ll have some friends and so on.  I pay in pizza.  That might not seem like enough but I use really, really expensive cheese.

I’ve never used my backyard as much as I have this year.  I started out by making an actual point of sitting in it every, single morning.  As soon as I wake up I grab my laptop, a coffee and head out back to go through my emails.  I’ve written this entire post and Photoshopped all of the pictures while … in my backyard.

It isn’t perfect but it’s almost perfect and for the moment that’s good enough for me.

HAHAHAHAHAHA.  Just kidding.  It’s not good enough at all.  I need to erect that effing pergola. I’d better start making a lot of dough.