I found a skull. So there's that. Also - I discovered I am rapidly losing all of my social skills and if this country doesn't open up soon I'm going to become an uncommunicative hermit covered in chin hairs. Even my elbows will have chin hairs. 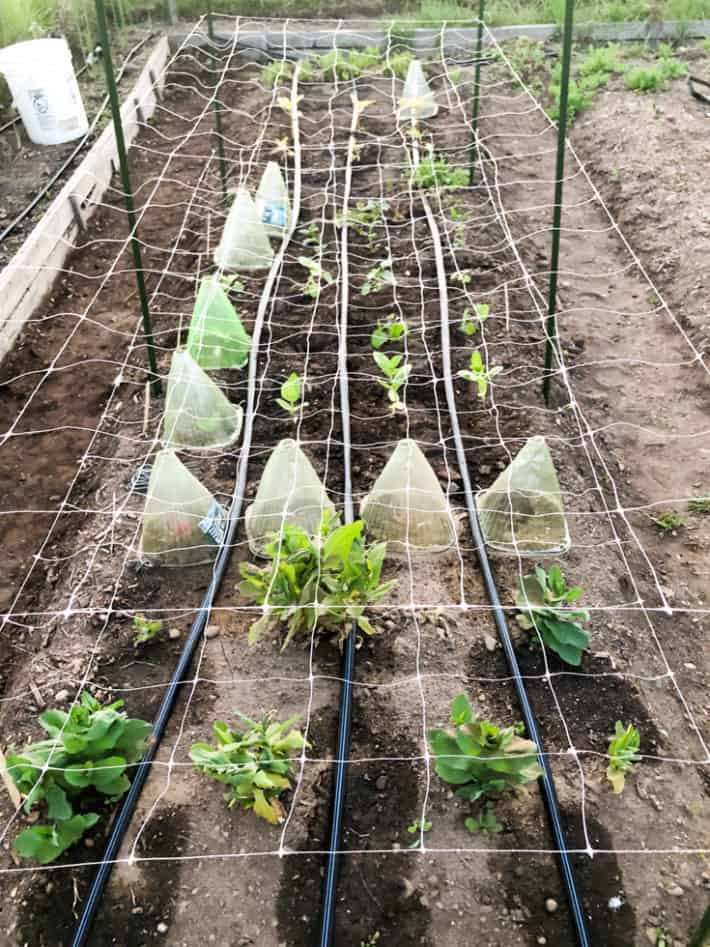 This week was the uppy down week where every good was followed by a bad.

I took Monday off from work which is always the very best way to start a work week in my opinion. It was just by luck that my day off landed on what was finally going to be a warm, rainless day. The weather this spring has taken its cue from the mood of the world and delivered nothing but a depressing, cloud of ick over everything.

But Monday it was finally going to be warm. Warm!

It was 32 degrees celsius which is about 90 degrees Fahrenheit which is not warm, it's hot. Just a few days earlier it had been snowing so my body wasn't terribly acclimatized to this and at some point my pancreas liquified.

Also I sweated so hard that my bra leaked all over my tee shirt. 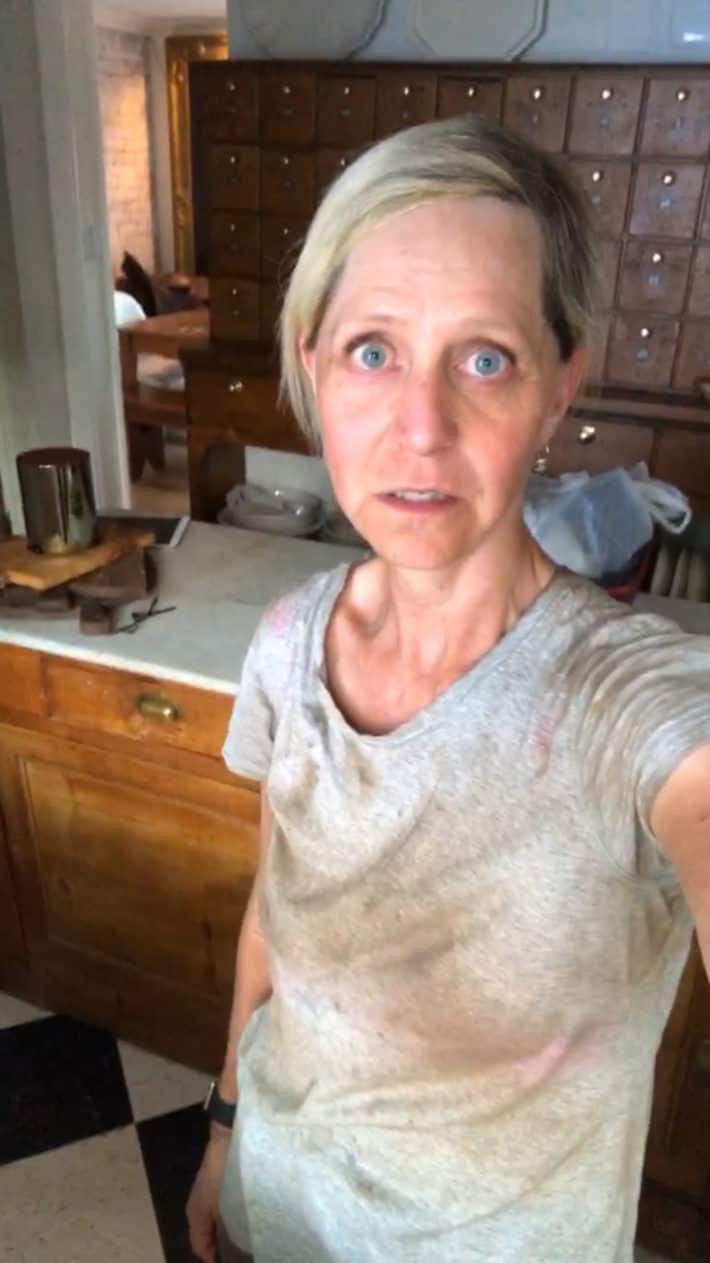 It was a pink bra. And now it is a pink tee shirt.

Yet still I worked and worked in the garden. I only had one day so it was do or die. Or die while doing, which I didn't so everything worked out fine.

It was when I was about halfway through the day and raking some natural fertilizer into the soil that I felt like I'd developed a bit of heat stroke hallucinations.

I reached down into the soil to pick up what hilariously looked like a skull.  Oh you crazy heat hallucinations. 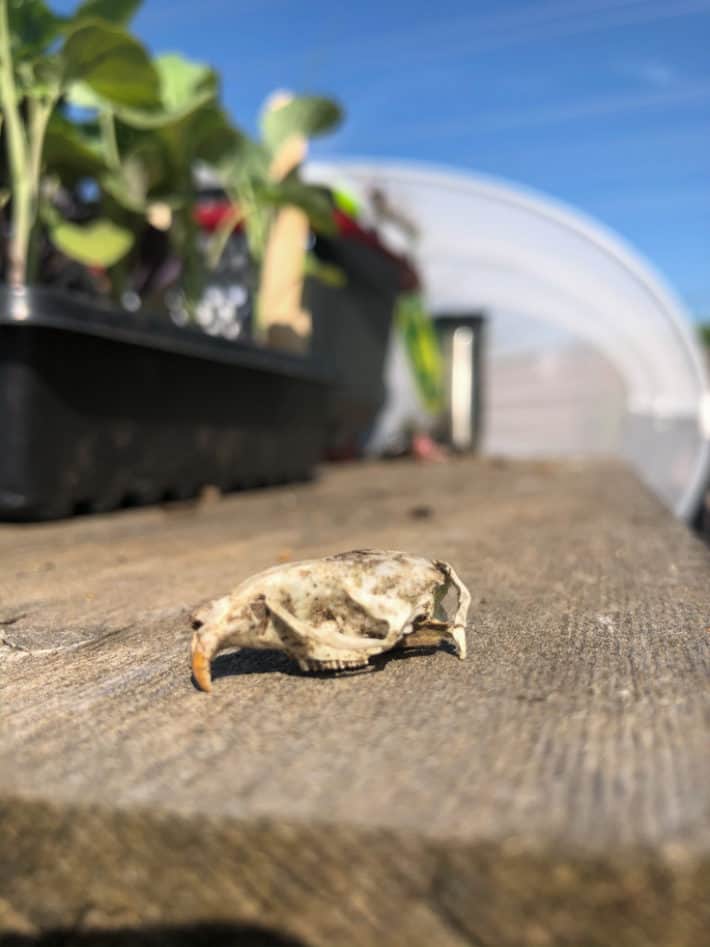 No, wait, hold on, that is a skull.  A tiny, tiny skull with tiny back teeth and big, fangy front teeth. I immediately declared it a top pocket find and then drank 14 litres of water.

It took me a lot longer than it should but I managed to get a tiny corner of the garden cleaned up and some flowers put in (which you can see in the first photo up top.)

Twice this week I ran into different neighbours and managed to say hello but then couldn't quite figure out what was expected of me next.

I knew standing in silence staring at them wasn't the right thing, but on both occasions that's what I went with.

I no longer have any idea how to interact with something that doesn't have fur, feathers or a sawblade.

Honestly I never thought in a million years it would work, but of the 4 I tried to graft, one of them took. 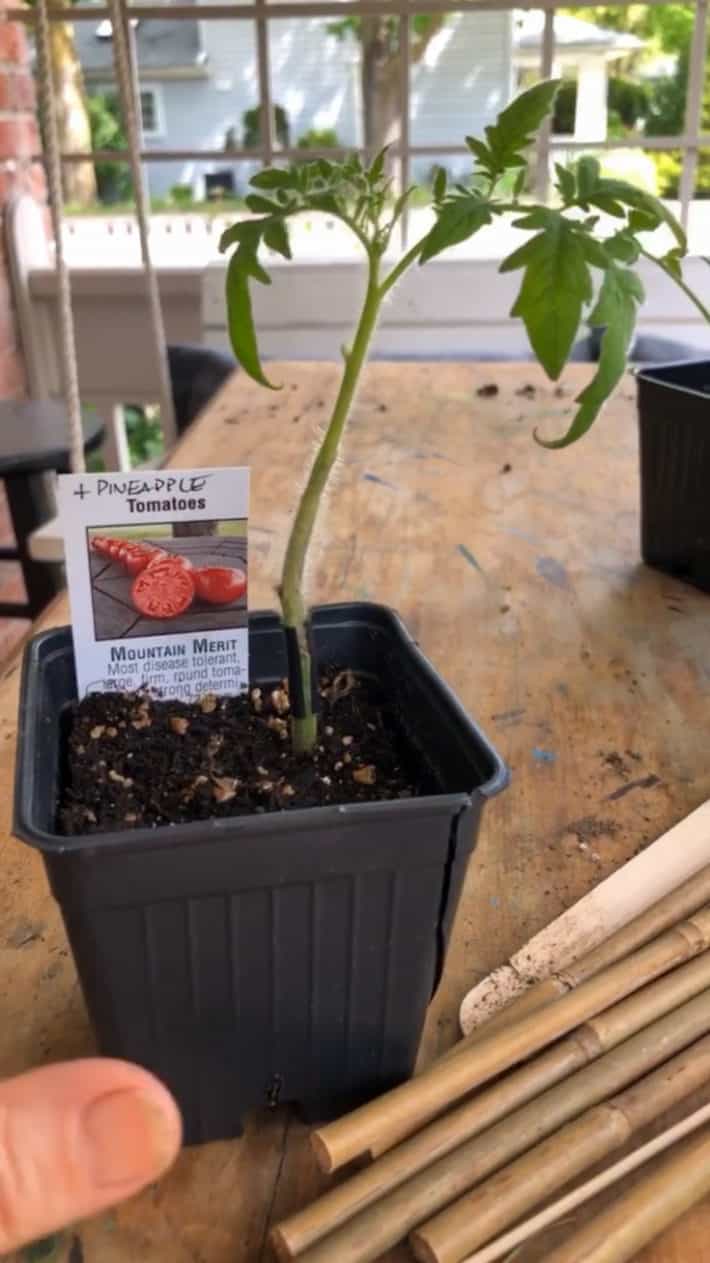 2 days after this photo was taken, I came outside and it looked like this: 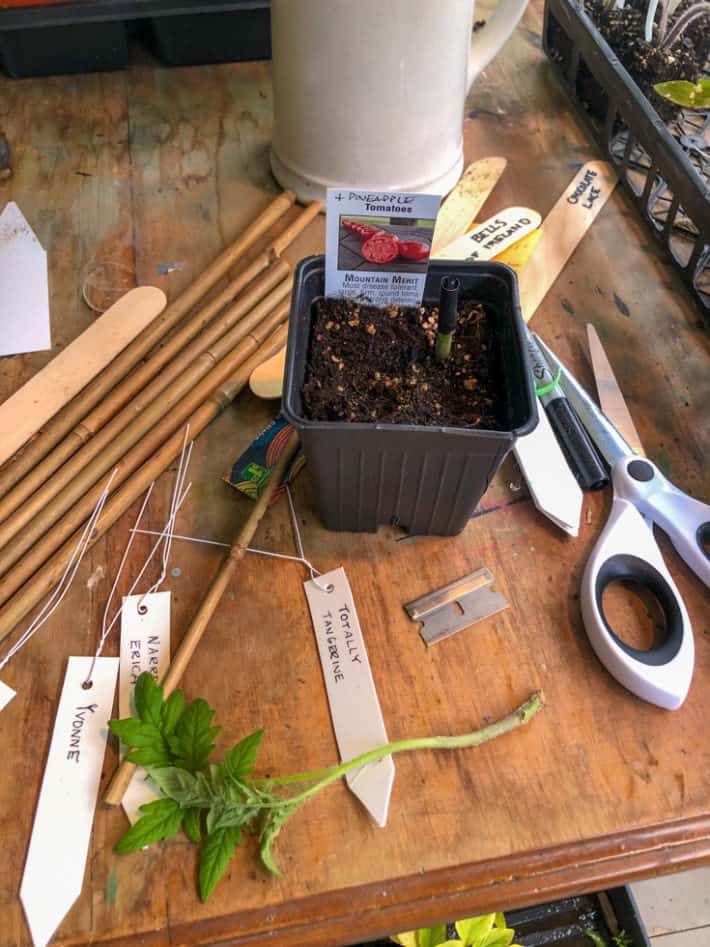 I have no idea how it happened but I suspect a roaming psychopathic tomato murder; codename "squirrel".

I am crushed over this. I'm don't really have time to try to do another batch of grafts, but I'll try anyway because I'm a glutten for uppy downs.

THESE plant markers I made are so far still one of my ups for the week. I made them for marking dahlias in my garden. 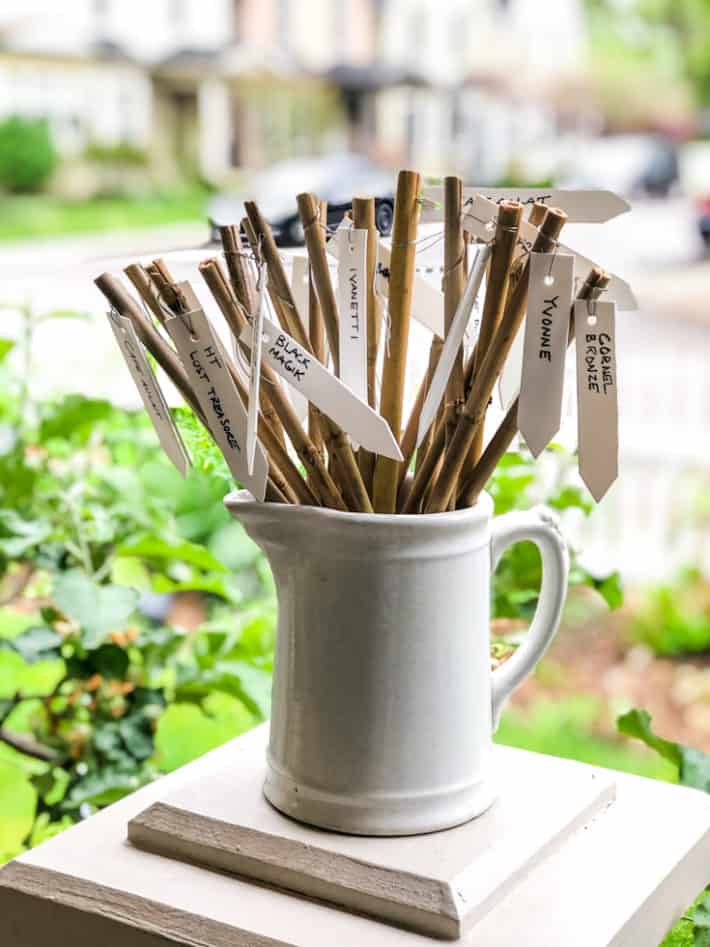 It's just a bamboo stick cut into 1' lengths.  I then split the top of the bamboo and slipped wired tags into the splits. Once the dahlias need to be dug up, I pull the wired tag out of the bamboo, and attach it to the tuber so I can keep track of all my varieties.

I haven't tested them outside in the elements yet so there's still time for these things to become a down.

This week I got to order a beautiful garden flower type arrangement to send to someone. I hired a woman who is local to me and does it as a cottage industry out of her home. It included  locally sourced and seasonal flowers like peonies, bleeding hearts, onion flowers, and anemones.

The floral designer sent me a photo of it and it was perfect. It's one of the most beautiful arrangement I've ever sent anyone and it made me so happy just to look at a picture of it.  That was the up. 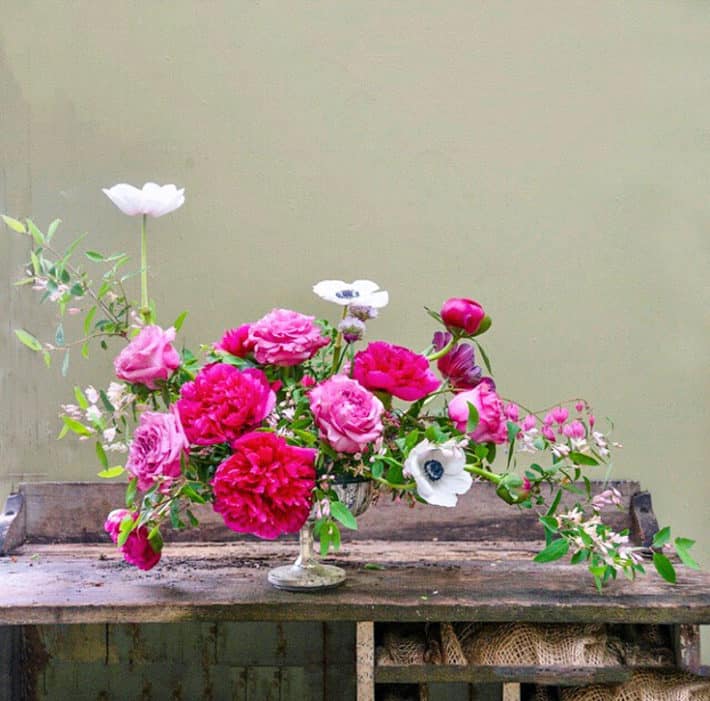 The down, was the occasion for the flowers.  I'm so sorry to have to say that a member of my family some of you have come to know died on Monday.  Aunt Jean passed away. She would have turned 106 in August.

Aunt Jean got an iPad when she was 100.  She went swimming at the beach of her cottage when she was 101. She pulled the fire alarm in her retirement home for fun and sped away in her wheelchair giggling like a lunatic when she was 103 (all caught on security footage🤣.)

I know. You want to be Aunt Jean when you grow up. We all do.

But remember to be her or anyone else with a long life, strength and character you have to take the ups with the downs. 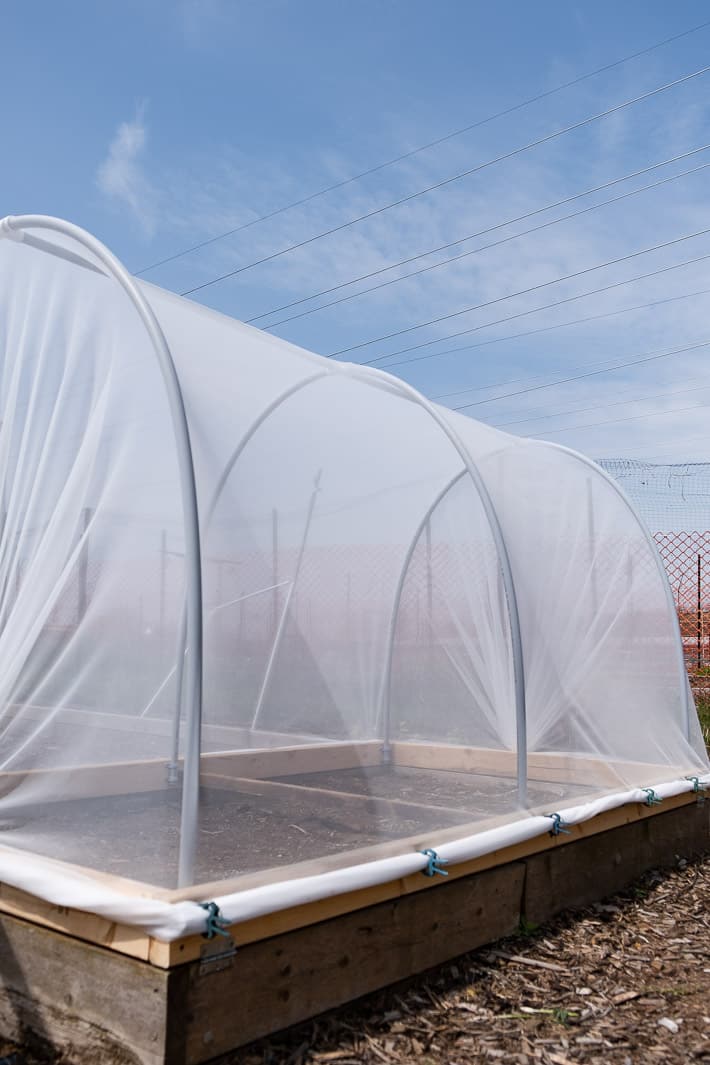 The hinged hoop house where I found my skull. I've got a few emails this week with people wondering what was eating their kale. Without even looking I knew the answer was going to be cabbage moth caterpillars. To protect any brassica from them you have to cover the plants up with row cover. This hinged hoop house is my fancy version of that. 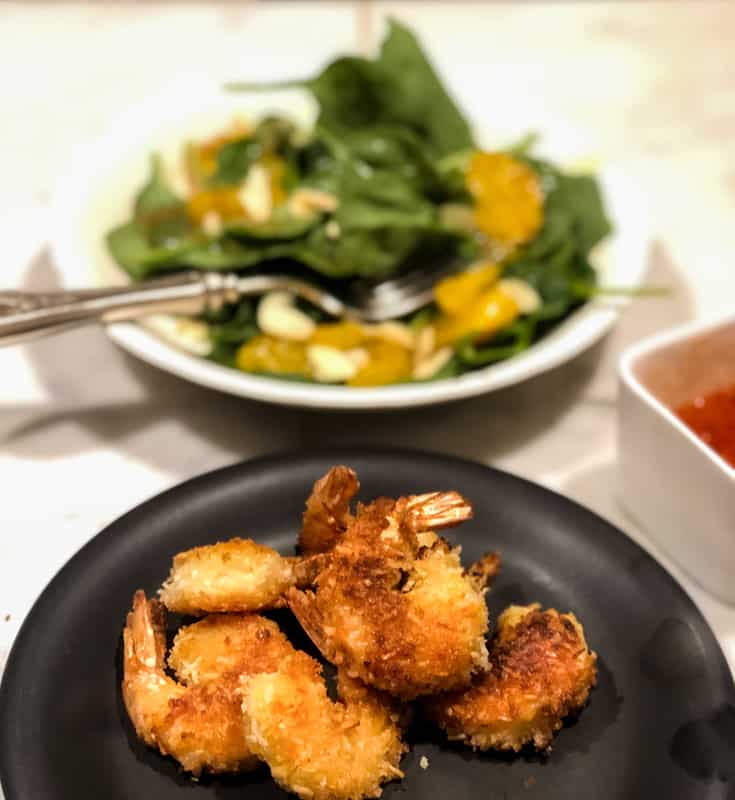 Holy stink I rediscovered coconut shrimp this week. My friend's daughter posted a picture of coconut shrimp she made on Instagram, I saw it, I drooled, I searched out a quick and easy recipe and found this one from Sallys Baking Addiction.

I served mine with an easy salad of baby spinach, mandarin oranges, sliced almonds and a ginger sesame dressing. 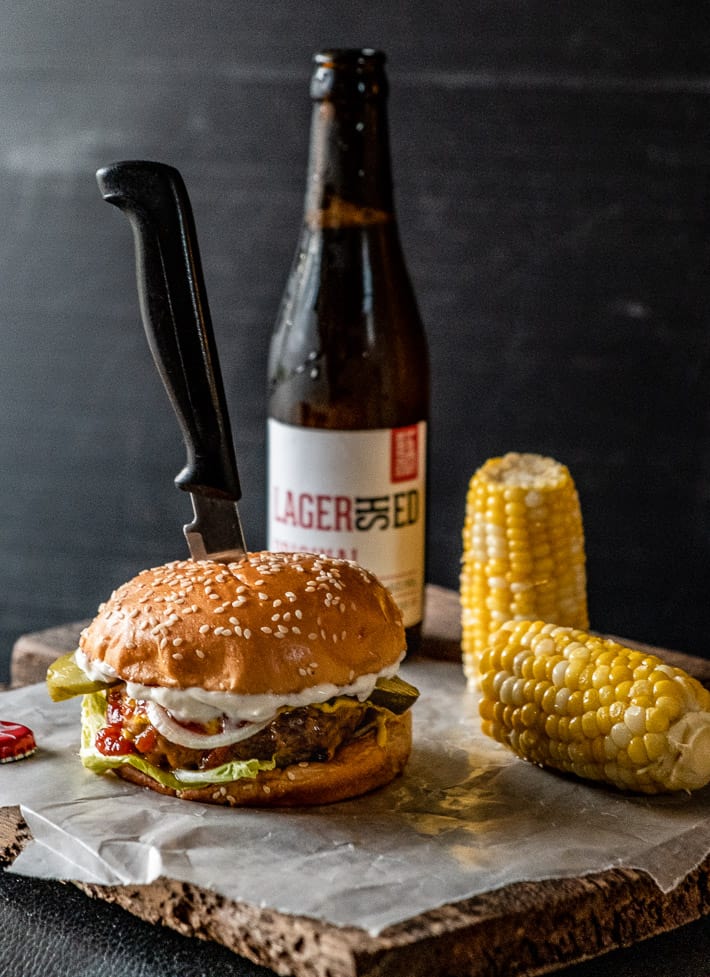 How to Make Homemade Hamburgers! My Way.

The hamburger recipe I posted this week officially made it onto the first page of Google for homemade hamburgers. I'll just be over here bowing. 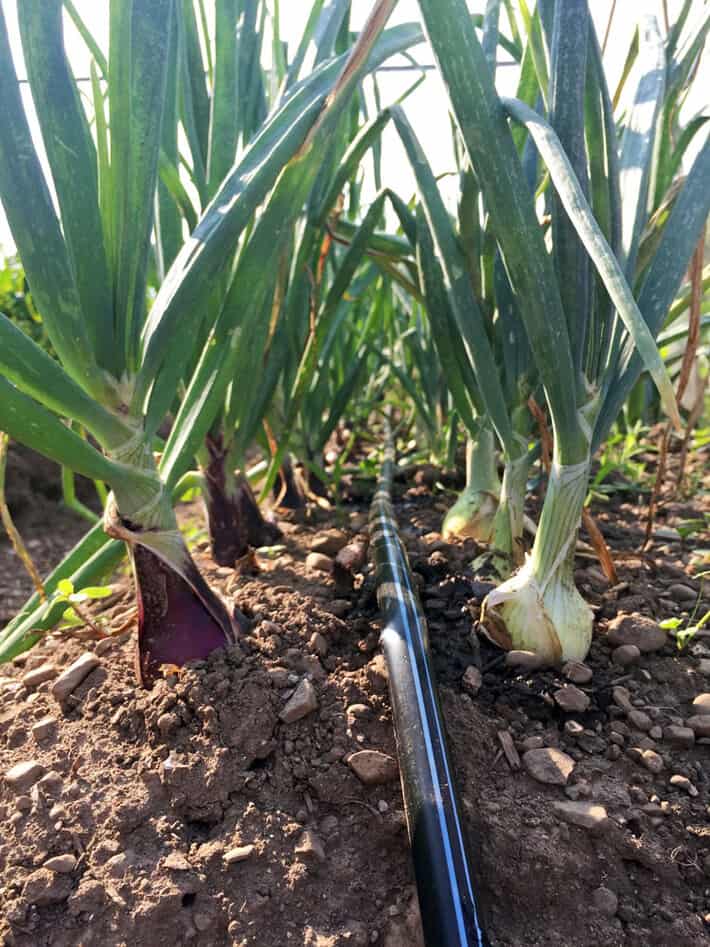 I also got a few emails this week from people saying they'd installed drip irrigation (several who bought the exact same kit as mine) and they love it. So if you've been on the fence about it you have my endorsement plus the endorsement of many of the readers here. 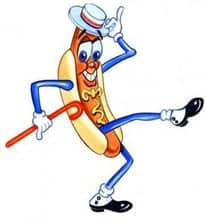 How to Make an Ikea Hot Dog.

I had hot dogs for dinner tonight! I can't lie, it was pretty exciting. If you LOVE an Ikea hot dog, is this going to be a happy day for you. Because years ago I infiltrated Ikea's hot dog booth and got all the information needed to make a hot dog identical to the ones you get in the store.