5 fall soups to keep the chill off because nobody wants to sit by the fire with a big bowl of salad.

I know you're thinking this is going to be a super-boring post about soup, because how interesting can soup be? But you'd be wrong in thinking that.  Very, very wrong.  Soup, as it turns out, has a very interesting history; none of which I know about.

I think there's something in there about nomads and broth and the invention of stain remover but you don't need to know about the interesting history of soup to enjoy it so why even bog yourself down with that kind of information?

I eat soup all season long but I definitely eat more of it during the fall and winter because  a big bowl of soup just seems to warm you from the inside out.  Like heartburn with flavour.

And for fall soups I like heavier, more complex soups made out of wintery ingredients like squash, potatoes, carrots and other rooty stuff.

I have 6 soups that are in constant rotation in my kitchen from October to March.  All of them are hearty enough to be an entire meal and all of them are easily adapted to be either vegetarian or vegan.

I always start with a chicken broth base for my soups.  So that's the major change you'll have to make if you're going the whole no meat or animal products route.  Just change up the chicken broth to vegetable and you're done.

Also you might want to omit the sausage from the Fire Broth soup, but that's totally up to you and how dedicated you are as a vegan.  You might be one of those sausage eating vegans for all I know.

This pumpkin soup recipe is one I stole from an episode of Masterchef Australia years ago.

TIP:   Don't even think of making this soup without making the bacon and pumpkin seed topping.  Just don't.  Also when you're at the grocery store pumpkin seeds might be labelled Pepitas.

This Smoked Tomato Soup recipe I stole from a cooking class I went to many years ago. I like to steal soup recipes whenever possible.  It's a very inexpensive hobby.  This tomato soup has KICK.  It's smoked tomatoes and roasted red peppers with a huge hit of hot peppers.  It is not meek.  It is not for the meek.  This is the kind of soup that a) takes a bit of time and b) is worth it.

How to smoke food wihtout a smoker.

You can smoke tomatoes in a regular BBQ. Just add some wood chips that have been soaked in water and then wrapped in foil. Punch a few holes in the tin foil so smoke can escape and lay the packet below the grill and above the grill burners.

Or you can buy a hand smoker which is the most fun cooking gadget in the world.

If you know me you know I like my potatoes.  I grow hundreds of pounds of potatoes. Actually people who don't even know me know I like potatoes.  I've never been told but I'm sure I smell like them.  In a good way.

This is a NO MEASURE potato leek soup recipe.  You cut up some potatoes, a couple of leeks then add enough broth to cover everything.  The potato soup recipe has the full details.

How do you blend potato soup?

Carrot soup can be bland and boring.  Szechwan carrot soup is not.  This soup has carrots of course, but it also has hot pepper flakes, a lot of ginger and peanut butter to give it more flavour than any other carrot soup you've had.

How to store Ginger

If you rarely use ginger but sometimes do, grab a hunk of it the next time you're at the grocery store and freeze it. Ginger freezes perfectly and you'll never say "CRAP ... I have all the ingredients other than fresh ginger!" again.

This sausage and vegetable soup is one I stole from a moment in time when I was doing a Paleo challenge with a Crossfit group.  I've since denounced both insanties but continue to enjoy the soup.  While sitting quietly.   Eating hunks of bread chased with a mashed potato milkshake.

TIP: If you don't want to eat Fire Broth soup for the rest of your life half this recipe.

I can't even begin to tell you how many black bean soup recipes I tried before finding one that was really, really great.  THIS the final soup on my fall soup list - Black Bean Soup is really, very great.  It's easily one of my favourite fall soup recipes. It's base is an Epicurious recipe that I played with a few times before deciding I didn't need to play with it anymore.

It has a deep, dark, black bean flavour with hits of cumin, lime and a base of orange juice.

TIP:  This is not a first date soup.  It's made entirely of beans.  It may not even be a first anniversary soup.

I need not worry about that.  Tonight ... it is Black Bean Soup. 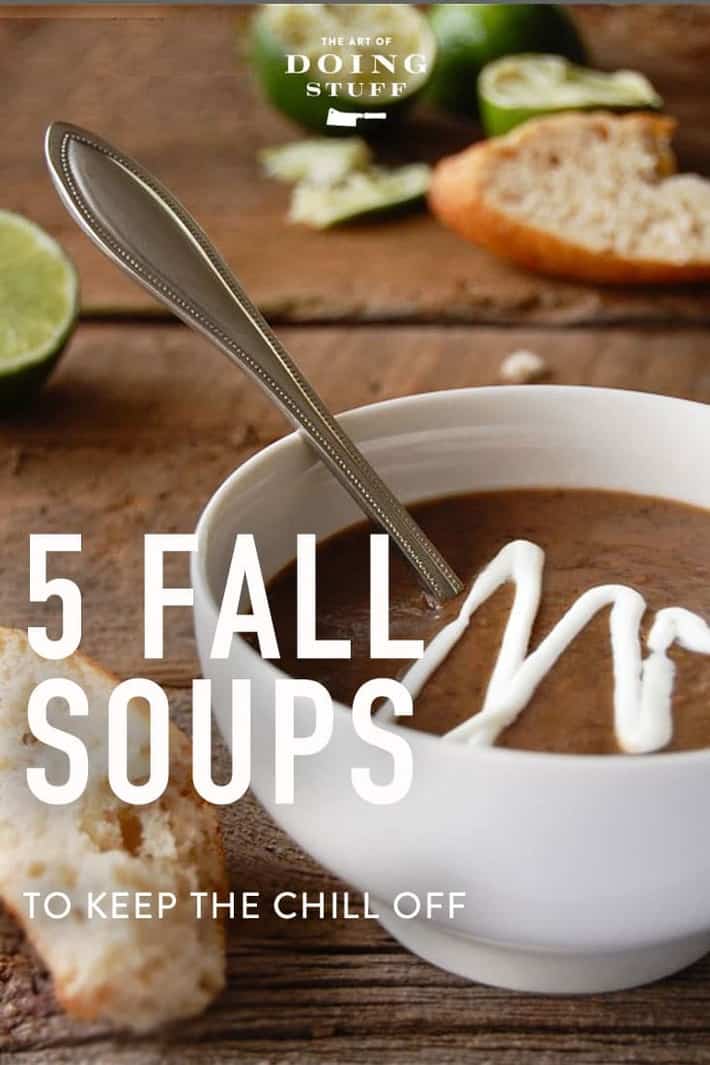